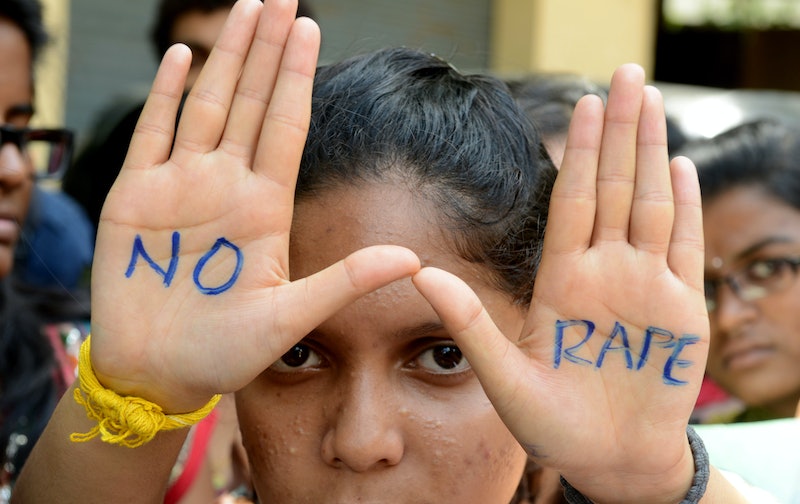 When 23-year old physiotherapy student, Jyoti Singh was brutally raped and murdered in Delhi in December 2012, her death sent shockwaves of protest throughout the Indian subcontinent, and inspired Leslee Udwin — a BAFTA-winning producer — to make a documentary that examined the horrifying crime and its fallout. But India's Daughter has just been banned in India — a move that Udwin roundly condemns, as the documentary is an eloquent examination of contemporary Indian attitudes and has been hailed as "a momentous expression of hope for society."

The filmmaker has since appealed to Indian prime minister Narendra Modi to intervene against the domestic ban, The Guardian reports. Udwin wrote in an editorial for India’s NDTV:

I am deeply saddened by today's attempts to silence the film 'India's Daughter' and to derail an impassioned plea for gender equality ... India is a democracy with civilised laws, but sadly this flouting of a basic right to freedom of speech … is flying in the face of civilised values.

India’s Daughter has freshly ignited the conversation on rape and abuse in India, particularly because of inflammatory remarks made by one of Udwin's interviewees. The filmmaker secured an interview with one of Jyoti Singh’s five assailants: Mukesh Singh, the alleged driver of the bus in which Jyoti was riding who is currently in prison in Delhi, is waiting for his appeal to come before the Supreme Court. Udwin was allowed to enter the high-security Tihar prison to conduct the interview.

In the finished documentary, Mukesh Singh betrays no signs of remorse, going so far as to blame the vicious attack on his victim. “A decent girl won't roam around at nine o’clock at night. A girl is far more responsible for rape than a boy,” he told the filmmakers, during 16 hours of filmed interviews. “When being raped, she shouldn’t fight back. She should just be silent and allow the rape,” he went on. Shocking as the comments are, they are chillingly matched by the views of defense lawyers on the case. “We have the best culture,” said one lawyer in an interview for India's Daughter. “In our culture, there is no place for a woman.” The documentary promises to be a powerful indictment of such attitudes.

Regardless, the Indian Home Minister Rajnath Singh has criticized the film in parliament — calling Mukesh Singh’s comments “highly derogatory and an affront to the dignity of women” — and promised an inquiry into how Udwin gained access to death row. He also accused Udwin of profiteering from the murder. Meanwhile, Delhi police officers told the BBC that they had gained an injunction against the film because the convicted rapist’s words were “creating an atmosphere of fear and tension.”

Following the domestic ban, India’s parliamentary affairs minister M Venkaiah Naidu said, “We can ban the film in India. But this is an international conspiracy to defame India. We will see how the film can be stopped abroad too.” While the ban has been justified as a measure against “public disorder” potentially precipitated by the film’s “objectionable content,” Udwin has rejected the decision as arbitrary censorship.

“India should be embracing this film — not blocking it with a knee jerk hysteria without even seeing it,” she writes in her NDTV appeal. “This was an opportunity for India to continue to show the world how much has changed since this heinous crime…” At the end of her editorial, she appends scans of the official document that granted her access to Tihar and the interview consent form signed by Mukesh Singh.

Another NDTV editorial — entitled "India’s Daughter Banned? It Should Be Compulsory Viewing" — takes Udwin’s side. And though there were parliamentarians who applauded the ban, some were against the move. ABC quotes independent MP and businesswoman Anu Agha, who said, “Banning this movie is not the answer. … We have to confront the issue that men in India do not respect women and any time there is a rape, blame is put on the woman.”

The ban is indeed a bizarre measure, especially given the generally optimistic thrust of India’s Daughter. Speaking of her motivations, Udwin told The Guardian:

It was an Arab spring for gender equality … What impelled me to leave my husband and two children for two years while I made the film in India was not so much the horror of the rape as the inspiring and extraordinary eruption on the streets. A cry of ‘enough is enough’. Unprecedented numbers of ordinary men and women, day after day, faced a ferocious government crackdown that included teargas, baton charges and water cannon. They were protesting for my rights and the rights of all women. That gives me optimism. I can’t recall another country having done that in my lifetime.

But despite the ban's nonsensical nature, the move does not necessarily come as a surprise. After all, India’s Daughter is hardly the first cultural production to get on the bad side of the country’s notorious censors. In some cases, such censors are self-appointed—like Dinanath Batra aka “the Ban Man,” whose legal letters to publishers often result in a book remaining unprinted or being substantially rewritten. Batra’s interest lies in expelling anything injurious to Hinduism, and last year he convinced Penguin India to pulp copies of Wendy Doniger’s The Hindus: An Alternative History.

Meanwhile, movie moguls are no safer. India recently blocked Fifty Shades of Grey from domestic cinemas, on the grounds of its sexually explicit content. As The New York Times reports, the country’s censors have been in turmoil for the last couple of months: The chief film censor resigned in January after accusing the government of political interference in the board’s decisions; the ruling Bharatiya Janata Party (BJP) then renovated the censorship board, and guidelines banning profanities in films were subsequently issued (though those rules have since been postponed). In short, it’s all a bit of a mess.

But what of India’s Daughter? Will the domestic ban be lifted? It seems unlikely that Modi will respond to Udwin’s heartfelt request in a timely fashion. A mercurial, pragmatic figure, the current prime minister has hardly proved himself a champion of women’s rights and freedom of expression in the past. But the show must go on. BBC officials have responded calmly to the ban. A spokesperson said:

This harrowing documentary, made with the full support and co-operation of the victim's parents, provides a revealing insight into a horrific crime that sent shock waves around the world and led to protests across India demanding changes in attitudes towards women. The film handles the issue responsibly and we are confident the programme fully complies with our editorial guidelines.

In response, the broadcaster has brought forward the screening date. Originally slated for a showing on International Women’s Day on Sunday, March 8, India’s Daughter will now be broadcast on BBC Four on Wednesday evening. A BBC4 editor told The Guardian, “From our perspective, given the strong public interest we feel it’s important it gets out.”