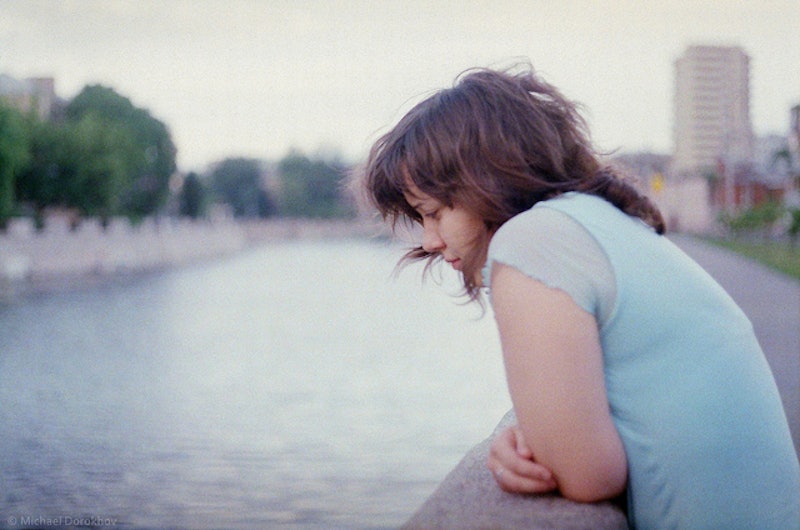 In recent years, there's been a lot of media discussion regarding rape culture, the boundaries of consent, and “no means no” — so why is no one talking about sexual coercion? With California's recent adoption of the nation's first Yes Means Yes law — which asserts that the absence of the word "no" does not constitute sexual consent — we seem to finally be grasping the reasons why a person might not be able to say "no" to sex, even though they want to. But what about people who say "yes" to sex under duress? Why aren't we educating people about the times when "yes" might not actually mean "yes"?

Sexual coercion is when tactics like pressure, trickery, or emotional force are used to get someone to agree to sex. It can be as as simple as encouraging someone to have a few too many drinks, or it can hide inside threats like "I'll leave you if you don't sleep with me." But no matter what form it takes, sexual coercion isn't just "a part of life" — it’s manipulative at best, and at worst, it’s abuse.

Sometimes, it even falls within the realm of rape; studies have documented that victims of sexual coercion can suffer from anxiety, depression, and PTSD at rates similar to to those who have experienced sexual violence. But because there is so little public knowledge about sexual coercion, many women who have been sexually coerced might not even be aware that what happened to them qualifies as sexual assault, and may instead blame themselves for their trauma.

Sexual coercion is a tricky thing to define — so it scares me that we aren't talking about it more. Because when it really comes down to it, we need more than just knowledge about what constitutes rape; we need a greater understanding of everything that can happen between "yes" and "no," so that we can feel confident that we are only saying "yes" to sex because we truly want to. At the end of the day, it’s your body, your choice, and no one has a right to persuade you otherwise.

If you have said “yes” when you didn't really want to, know that you may have been sexually coerced, that there's no excuse for what happened to you, and that what happened was not your fault. Here are five warning signs that a sexual encounter may be coerced.

1. You're Having Sex Because You've Been Told It’s Your Duty

“You’re my wife/girlfriend, you are supposed to be having sex with me.”

Many cultures teach us that sex is an inherent part of marriage. Many people take that a step further, and believe that being in a romantic relationship with someone makes you entitled to have sex with them. The problem with that skewed thinking is that it leads some people to act as if taking on the label of "wife," "girlfriend," or "partner" suddenly makes your body their property.

Being in a relationship with someone does not give them a right to your body; and if you are having sex because you are constantly being reminded by your significant other that it is your job and it is expected of you, that sex is not being freely given. It is being demanded.

We all want to please our partners, and sometimes we do have sex with them even when we aren’t particularly feeling it. But we do that because we want to. However, if you're having sex with your partner solely due to the expectations that they place on you, it’s time to reevaluate who is in control of your sex life.

2. You're Having Sex Because You Were Threatened

“If you don’t have sex with me, I’m breaking up with you."

"If you don’t sleep with me, I’m going to tell everyone you are a prude.”

If you are having sex with someone because you are afraid of what will happen if you don’t, not because you want to — if the “yes” was given out of fear for an implied repercussion — then that is absolutely sexual coercion. A “yes” isn’t really a “yes” if you are just too scared to say “no.”

3. You're Having Sex Out Of Guilt

“If you really loved me, you would have sex with me.”

"I wouldn't have taken you out to dinner if I knew you were just leading me on. If you didn't want to sleep with me, you shouldn't have been flirting with me either."

If he really loved you, he would respect you. Guilt is one of the biggest tactics used in sexual coercion. Every relationship has its dry spells, and while mutual respect and communication can help sort it out, a guilt trip is emotionally manipulative and unhealthy — and pressuring a partner to have sex using guilt is absolutely a form of coercion. Couples don’t grow closer by pushing each other into doing something they are uncomfortable with. A healthy sex life is built on a foundation of respect, not manipulation.

4. You're Being Pressured To Drink Before A Sexual Encounter

"Here, have a drink, have another, let me refill that glass for you. I want you to be relaxed.”

There has been a lot of discussion recently about whether a drunk woman can give consent to sex. But you don’t have to be fully drunk in order to be sexually coerced with alcohol. It is very easy for someone to try to ply you with alcohol as foreplay to a sexual encounter — because they know that if they can “relax” you enough, you may drop your resistance due to your impaired judgment, and agree to have sex. If your partner knows that you don’t want to have sex, and you find them repeatedly topping off your glass, be aware that you might be getting manipulated.

5. You're Having Sex To Avoid Angering Your Partner

If you know that turning someone down for sex might mean dealing with an explosively angry reaction, you are dealing with more than just sexual coercion — this is also a major red flag that you are in an abusive relationship. Sex should never be something that is done out of fear, or to protect yourself. Sex like that is not only coerced — it is assault, and most likely part of a larger abuse problem. If you find yourself saying yes to sex as a means to avoid harm, then there is no excuse for your partner's behavior; please consider talking to someone and getting help.

If you've been pressured or coerced into sex, you can speak with a counselor at the Rape, Abuse, and Incest National Network at 1-800-656-HOPE.