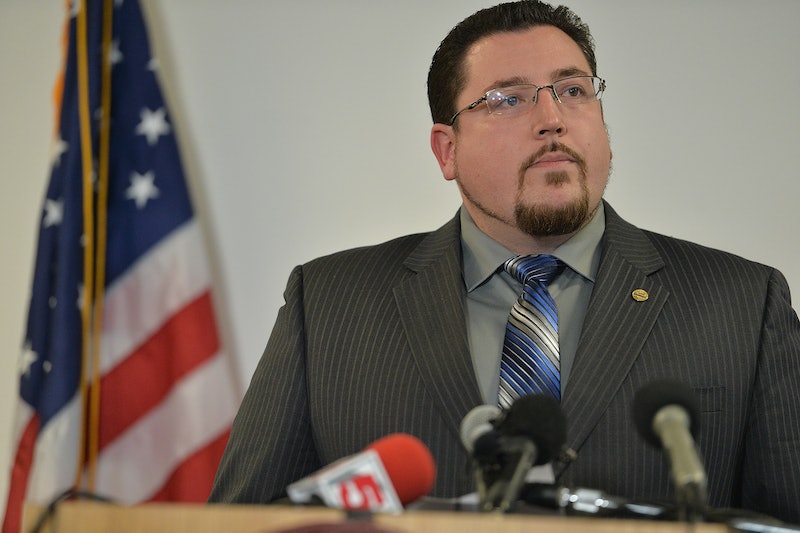 On Wednesday, a press conference was held where Ferguson Mayor James Knowles responded to the Justice Department's report that indicated systemic racism and egregious misconduct in the way that the Ferguson Police Department operates. Knowles primarily touched upon the city's latest initiatives in his brief statement, only explicitly mentioning discrimination in regards to three individuals who had sent racist emails and were placed on administrative leave following a meeting between the DOJ and Knowles, among other city officials.

Of those individuals, one has been fired and the other two are still awaiting a final decision in an internal investigation. According to Knowles, the Ferguson police department is now looking to fill all three officer positions. Knowles continued:

We'll have an update on these positions and racial makeup in the next week. The Ferguson police department has hired one correction officer since August 9, 2014. One African American female candidate was hired out of a 91 applicant pool. The Ferguson police department has also hired two assistant court clerks as of August 9, 2014. Both positions were filled by African American females from a pool of 64 applicants.

Knowles then stated that Ferguson police officers had finally completed diversity training a full three months after the aforementioned hires took place. The response on social media has been one of outrage.

Before Knowles took the podium at around 6:45 p.m. ET, a spokeswoman said there would be no questions after his statements. Indeed, there were not. Less than 10 minutes after he'd taken the podium, Knowles had already left the room, and the press conference was over. In all that was said about the city's latest initiatives to establish better accountability in the police department and beyond, no mention had been made of Ferguson police's racially prejudiced arrest rate at 93 percent of those arrested in 2012 to 2014 being African Americans.

Likewise, no mention was made of what the DOJ called "unlawful bias" regarding use of force, nor had Knowles explained why the city was examining their court fees and choosing to no longer charge residents administrative fees to retrieve a towed vehicle or eliminating fees to look up warrants. The DOJ report explicitly stated that similar fees as well as arrest warrants were used as a means to threaten individuals to pay up or face jail time.

St Louis Post-Dispatch photographer David Carson paints a picture of a cut and dry conference in which the mayor simply read statements rather than acknowledged the heavier issues of the 100-plus page report.

Despite its brevity, Missouri Governor Jay Nixon issued a far more sobering statement in response to the DOJ report — one that makes a far stronger case against the systemic discrimination in Ferguson.

Knowles' hollow echo of that statement in his brief press conference — that "we must do better not only as a city but as a state and a country" — sadly feels scripted. Perhaps his most revelatory statement was a joke made just as he was hitting the podium. Knowles' first comment was that there appeared to be more space for microphones than for his written remarks. That's because the entire country is listening and, ultimately, expecting more.