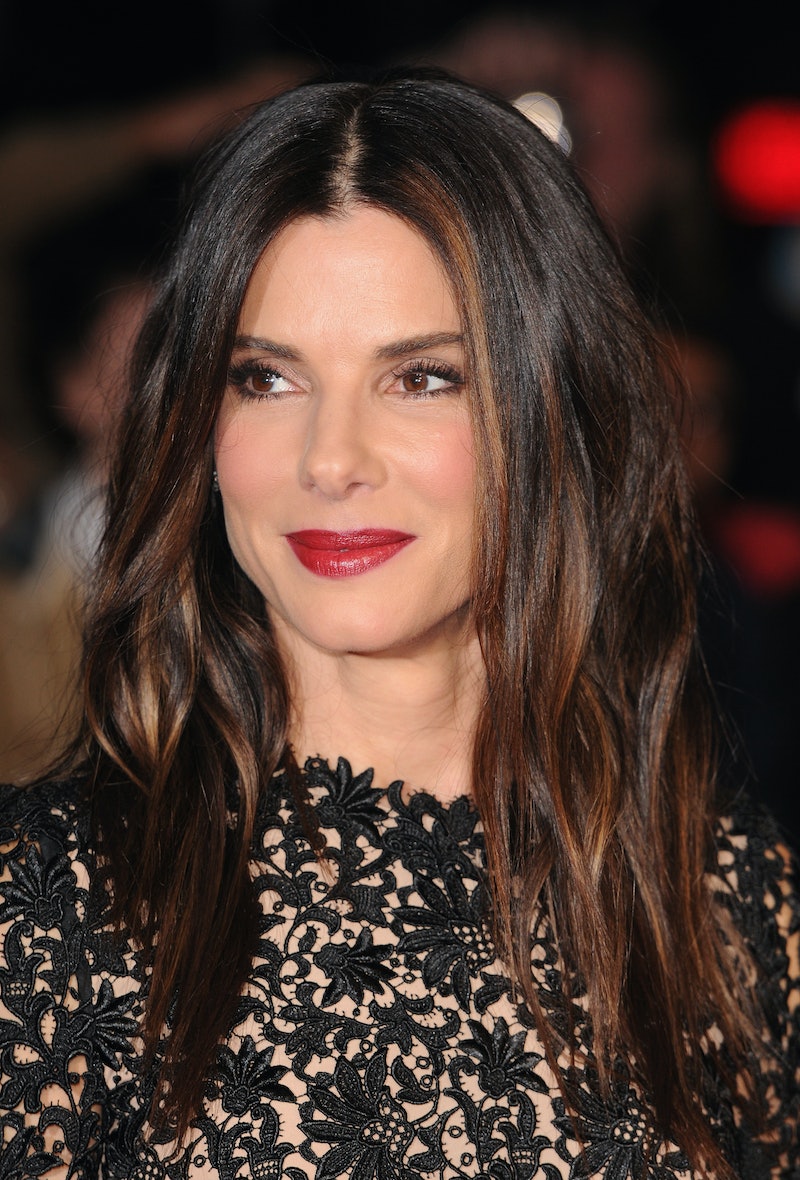 Sandra Bullock is making the publicity-fueled rounds in promotion of Gravity, and the biggest thing we're all learning from this particular press run (other than the heavy capacity of space puns that are possible) is that Sandra Bullock is just a cool person. We knew this before, yes, but we're a people with relatively short attention spans when it comes to certain pop culture things, so a reminder is always nice. Bullock, on top of being a generally cool lady, is also a person who has had to go through some pretty rough things in her personal life — and pretty excruciatingly publicly. Which is why Bullock's comments on the matter were pretty damn inspiring.

We don't really feel the need to rehash every time that Sandra Bullock's personal troubles have been broadcast — let it be known that it has happened frequently and that some of the most-written-about times involved men in her life. What's interesting here isn't the nuances of what dudes did, but how Bullock talks about her reaction to it.

"My mother raised me not to depend on a man for anything," she says. "I may have taken that to extremes."

This was in an interview with Express, in which she elaborated:

"I was afraid of being a failure, of not having the best time or of being chicken," she tells me. 'But every year I get older I think, What was I fearing last year?' You forget. And then you move on.

"I used to get out of bed sometimes and feel depressed and watched a lot of reruns on TV to get over it. I should have allowed myself to be a little more human and not worry about trying to be a superwoman. On some days I woke up thinking I was garbage. On others that I was a great person. If a therapist had got hold of me they would have had a field day."

Bad things happen to everybody at one time or another, regardless of fame or money or personality disposition. For someone like Bullock, whose success and bumps in the road have been so publicly recorded, it's nice that she's being honest about it and seems to be working towards bettering her perspective.

More like this
Beyoncé & Madonna’s “Break My Soul” Remix Honors A Group Of Black Icons
By Stephanie Topacio Long
What is Sandra Bullock's Net Worth?
By Meg Walters
Khloé Kardashian Is Reportedly Dating A Private Equity Investor She Met Through Kim
By Jordyn Tilchen
Kanye West Has The Most Kanye Reaction To Kim Kardashian & Pete Davidson's Split
By Jake Viswanath
Get Even More From Bustle — Sign Up For The Newsletter