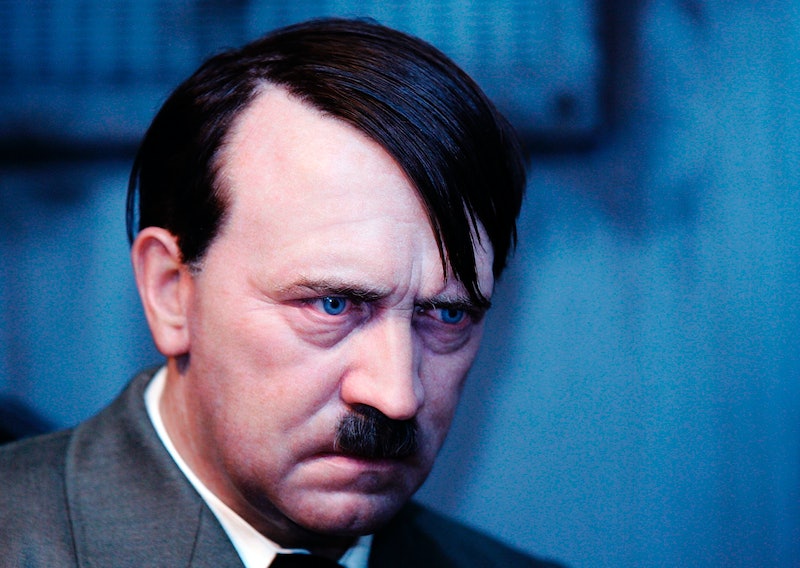 If someone told you their friend looked like Hitler, it's likely your first reaction would be something along the lines of, "Damn, poor guy." But when I tell you this tiny Welsh Chihuahua puppy looks exactly like Hitler (and as a result, was called Adolf by his family), your reaction is going to be more along the lines of, "OMG how cuuuuuuuuuuuuute!" Because as it turns out, humans who look like Hitler are unfortunate, but puppies that look like the murderous dictator are actually pretty darn adorable. Which I think is definitive proof that puppies are better than people, being that they can make even the most abhorrent, hated face in history look totally kissable when it's re-imagined in their puppy features.

Adolf the pup has markings on his head and face that mirror Hitler's hair and moustache, and he's even got a pinkness around his eyes that matches Hitler's baggy under-eyes. Although puppy Adolf's eyes sparkle with puppy glee, rather than being dead with filthy hatred like his human doppelganger's. Adolf belongs to hairdresser Claire Walsh, who was surprised and tickled to find him in a litter of five pups, none of the others which look like Hitler at all. Watch Adolf being cute below:

Here are some other things that look like Hitler:

This OTHER adorable pup