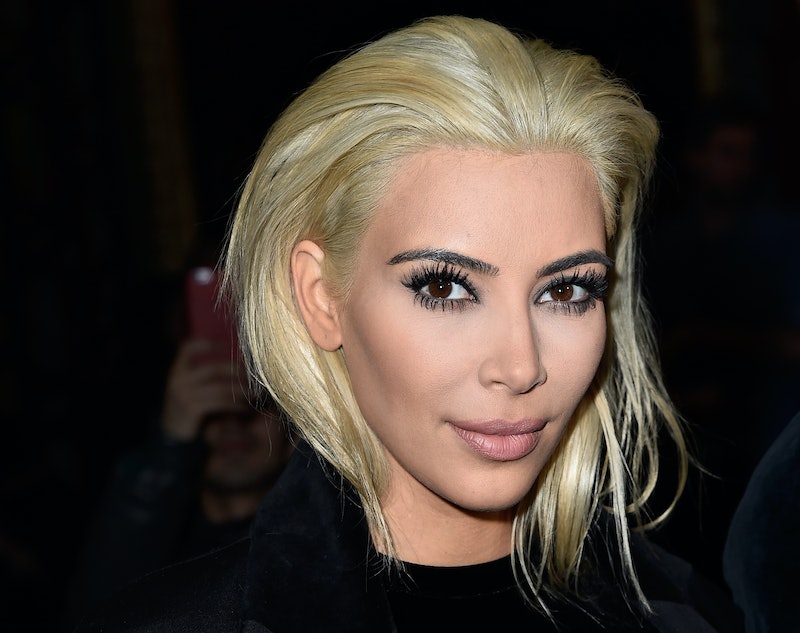 I for one am a little sick of Kim Kardashian's attempts to "break" the Internet (Can the Internet even break? I don't understand this logic!). But if her naked bum couldn't manage to do it, Kim Kardashian's platinum blonde locks might just have the power. Yup, judging by everyone's freaked out Twitter posts, this one definitely broke the Internet, so to speak. Mission accomplished, Kim. And all it took was a bottle of peroxide!

If you woke up a little late this morning (NYC snow day, y'all!), you might've have missed the big unveiling of Kim's new 'do. She landed in Paris for Fashion Week with husband Kanye West yesterday morning, with all of her hair tucked neatly into a black beanie. And then, of course, she later made a dramatic exit from their hotel — sans her beanie disguise. A Kardashian revealing her new, bright blonde tresses in a less-than-sensational fashion? Blasphemy!

Kim's platinum-hued 'do was reportedly created by celebrity colorist Lorri Goddard, after Kim posted a big thank-you to Goddard on her Instagram. But it looks like Goddard has been going behind Kardashian's back, doling out that same blonde 'do to other celebs throughout the years. Don't believe me? Just take a gander at these Kim K look alikes below...

Kim now shares the same white-blonde tresses and contrasting dark brown eyebrows as Game of Thronescharacter Daenerys Targaryen. Also, they're obviously both queens and I'm sure Kim has a couple dragons hidden somewhere on the Kardashian compound, so this works on multiple levels.

GUYS, matching bleach blonde hair and matching latex dresses. It's too much for me.

Replace father with Mama Kris and they're totally the same person.

And they both went full frontal once upon a time! #Twinning!

In addition to their matching hair, I'm going to assume that they can also both do this scary eye thing.

Bleach blondes unite to walk a mile in these Louboutins.