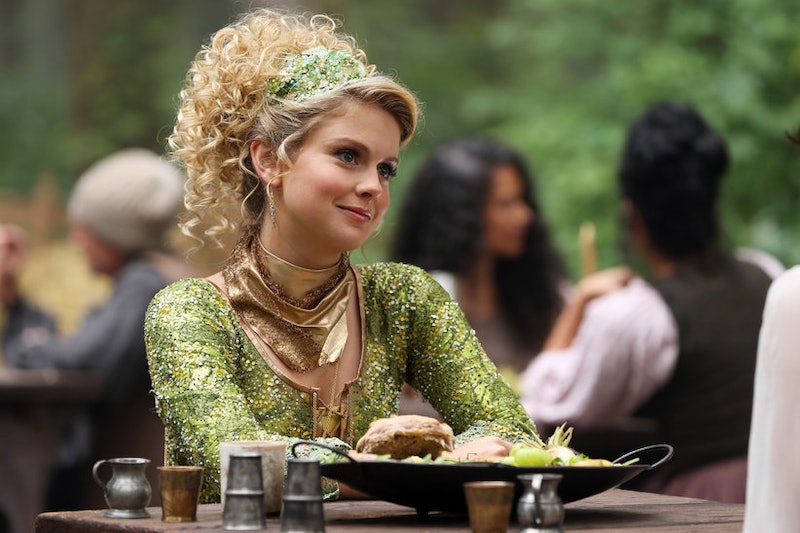 Tinkerbell is finally here! After three painful episodes set in Neverland (counting last season's finale), we finally met the fairy that everyone's been waiting to see. But she's not even a fairy anymore. Once Upon A Time's Sunday episode introduced us to the Neverland staple, Tinkerbell, gave us her backstory, and taught us some valuable lessons about love.

Tinkerbell or "Green" (as she was called by the Blue Fairy during fairy training) has a murky past with Regina because who doesn't? She's the worst. Apparently, she tried to save her (How dare she, right?) from becoming the Evil Queen and instead ended up ruining her own life. The moral of this story is that Regina has been selfish forever. But anyway, after her arranged marriage to Snow's father, Regina was miserable and so Tinkerbell decided to help. They had what we in NYC like to call "boozy brunch" and bonded over men and love and girly things. Tinkerbell had an epiphany that resulted in the idea that helping Regina find her true love would make her a good fairy. So she STEALS (not really good fairy behavior) pixie dust and uses it to find Regina's true love, the person that will give her enough happiness to prevent her from becoming evil. That true love ends up being — drum roll, please — ROBIN HOOD. Yes, Robin Hood of "steal from the rich, give from the poor" fame, a man who's got a really sexy and badass lion coat of arms tattoo on his forearm (swoon). Selfish/cowardly Regina runs away because she believes that her anger defines her (if we had a penny for every time someone said that in therapy) and ends up ruining Tinkerbell's chances of becoming a good fairy. The Blue Fairy actually takes Tink's wings away and turns her into a human because she "doesn't believe" in her anymore (wah). And thus, she's become a strange, twitchy, jungle-dweller in Neverland who's apparently "friends" with that little troll Peter Pan.

In the midst of the excitement over the introduction of Tinkerbell, Once Upon A Time has taught us some realistic lessons about love that will have you biting your tongue about all of those times you blamed Disney for the fact that you're still single:

You Can Have More Than One "True Love"

As illustrated in this episode by the Tinkerbell-Regina saga. Regina's first "true love" was her stable boy, Daniel, and losing him because of her marriage to Snow's father, the King, was the source of her anger. Her deep-rooted, persona-defining, evil-turning, anger. But, like Tinkerbell showed her, the Universe wants us to be happy. Thus, because she lost her first "true love" due to circumstances beyond her control (like her trainwreck, social climber of a mother), she was gifted with another chance at life-long happiness. So to everyone who believed we only have one perfect match out there in the world, think again.

Love Can Redeem You

Regina's love for Henry is pretty much her only redeeming quality, even though she uses it as an excuse to do inexplicably bad/stupid things. Her love for Henry redeemed her in Tinkerbell's eyes, however. Her heart was in Tink's hands, perfectly positioned to be crushed into dust, and her story about loving Henry was enough to get her heart back and live to see another day. Even Rumple's love for Belle and her love in return managed to redeem him in her eyes and it changed him for the better. He loved her so much that he went from being the big baddie to being wrapped around her literate finger.

Love Is A Partnership

Snow and Charming have the ultimate relationship. Really, they are one of the most stable, supportive, functional relationships on television because they're such a damn good team at everything. They also get bonus points because their onscreen relationship spawned a real life romance between Josh Dallas and Ginnifer Goodwin and now they're engaged! Inspiring, really. Life imitates inspirational and romantic art. They work together like it's their job and they check each other when they feel someone is getting a little out of control (take note, United States government). Basically, they are a poster relationship for "love is a partnership." They're like the Beyoncé and Jay-Z of fairytales.

Once Upon A Time has a knack for hooking up characters that wouldn't traditionally be together. It helps that they have a reputation for pretty much turning every fairytale we think we know and love on its head. So basically anything can happen, even in relationships. Hey, it's a running joke that there's romance blooming between Hook and Emma, so really, anything can happen.

In the past two seasons, The Blue Fairy has fallen in love with a dwarf, Belle fell in love with "The Dark One," or Rumplestiltskin, and in Sunday night's episode, we found out that Mulan is actually in love with Aurora. Yes, Once Upon A Time introduced the idea of homosexuality in fairytales and it really worked. Mulan, Aurora, and Prince Phillip have shown up a few times over the past two seasons and subtle hints have been dropped about Mulan's feelings but nothing confirmed them until this episode. Since Neal returned to the Enchanted Forest and they became his companions, Mulan in particular has risen in the ranks to a more central character. In a subtle and genuine moment, Mulan tries to share her feelings with Aurora but finds out that she's expecting a child with Prince Phillip and decides to keep quiet. But the feelings are in her eyes. There you have it, skeptics, love is universal.

I know you're feeling really guilty about hating on Disney-made relationships now. Once Upon A Time's fairytale characters are pretty damn wise in the love department, so take note and stop blaming them for your relationship problems.