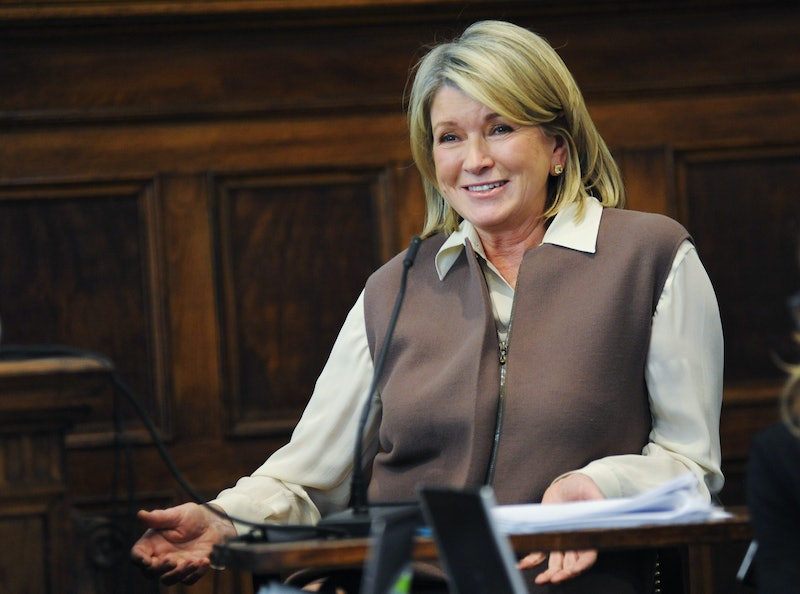 The roast of the century is almost upon us. On March 30th, Justin Bieber will get his own Comedy Central Roast hosted by Kevin Hart, and it will be comedy gold. Eggs may or may not be thrown. Tears may or may not be shed. I mean, if you're not totally convinced that this is going to be insane, just consider this: After years of hard work, Bieber tweeted, he's finally provided enough source material for a roast, which has been his dream "for years." Fortunately for Bieber and for society as a whole, he's finally getting his wish. A thoroughly cathartic evening will be had by everyone in attendance, including Snoop Dogg, Ludacris, Shaquille O'Neal, Hannibal Buress, Natasha Leggero, Chris D'Elia — and, in a surprise twist of events on Thursday morning, E! tweeted that Martha Stewart will also appear at Justin Bieber's roast, an announcement that is both wonderful and bizarre in the best of ways.

It might not make much sense at first that Stewart, of all people, would not only attend Bieber's roast just for laughs, but actually actively roast him. However, we're talking about a woman who's been to prison and once washed down Taco Bell burrito with a 40 oz. beer on live television. Stewart knows a thing or two about roasts, both the edible and inedible kinds, and she will no doubt roast Bieber in a way that is both tasteful and decorous.

Here are a few things we can expect when Martha Stewart roasts Justin Bieber:

There will be a food puns

This is a roast. Martha Stewart makes roasts. The inevitable puns will be plentiful.

Justin Bieber will get a stern talking-to

Somebody should do it, for all of us.

Martha Stewart will be surprisingly cool about the whole thing

Of course she does.

Justin Bieber will learn to respect his elders

Wanna go to a real party?

This roast will be a "good thing"

More like this
Tacos Are Chef Kay Kay’s True Love Language
By Maxine Harrison
How This Founder Inspired A New Wave Of Drinking
By Jordan Murray
An Ultimate Guide To The Music Of 'Rap Sh!t'
By Brad Witter
Everything To Know About 'And Just Like That...' Season 2
By Jack Irvin
Get Even More From Bustle — Sign Up For The Newsletter