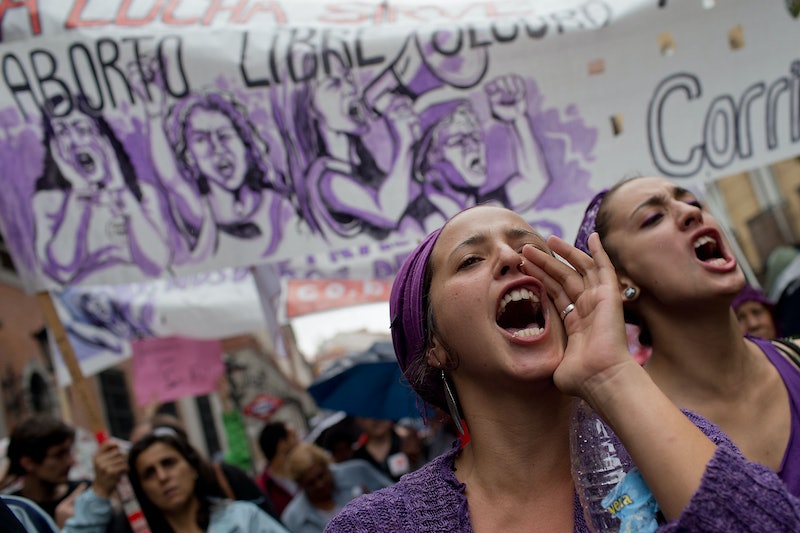 Good news on Thursday came in three, like the saying goes, as a trio of female Democratic senators introduced pro-choice legislation safeguarding women's healthcare — in a bill partially aimed at combating efforts by some members of the Republican-led Congress to do exactly the opposite. Sponsored by Sens. Patty Murray, Barbara Mikulski and Barbara Boxer, the aptly-named “21st Century Women’s Health Act” aims to take even further what the Affordable Care Act, or Obamacare, currently provides for women.

Endorsed by Planned Parenthood, the bill will ensure that all women be provided with maternity coverage, family planning services and rape crisis tools.

Sen. Murray told Think Progress that women's reproductive issues are at a "critical moment" in time. While Obamacare has helped women make gains in the health department — as far as making gender-specific healthcare more affordable — right-leaning politicians across the country have waged a persistent campaign on state and federal levels, threatening to overturn legislation that protects women's healthcare rights, and in some cases succeeding. The D.C. senator said:

We absolutely can’t get complacent about the gains we’ve made so far. As we continue to fight back against those who miss the Mad Men era, the 21st Century Women’s Health Act lays out important ways we can and should move forward on women’s health.

According to the progressive-leaning blog, the legislation would oblige states to provide rape victims with emergency contraception and contraceptive services for women under Obamacare would be expanded. It would also set up a research panel to review the repercussions of anti-abortion laws that limit access to clinics, and an ombudsperson would be appointed to supervise the implementation of women’s health protections under Obamacare. And the bill also requires establishing a database to collect reports of women being wrongfully charged for free preventive services.

In an email to Bustle, President of Planned Parenthood Federation of America Cecile Richards applauded the bill:

[W]e’ve seen the progress that comes when women can make their own health care decisions, without politicians standing in the way. Together, through this bill and other efforts, we will keep working to ensure that women across the country have the information and access they need to make decisions about their health care and their futures.

Democratic lawmakers have worked to combat conservative pushback against the progress in women's rights over the past few years. The National Institute of Public Health published a study in January that reported abortion rights activists advanced more proactive policies in 2014 than in any single year in the past few decades. In 2013, a group of Democratic Congress members introduced the Women's Health Protection Act to prevent states from imposing more unnecessary restrictions on abortion.

As welcoming as news of the 21st Century Women’s Health Act is, the legislation isn't likely to pass a GOP-led Congress that has tried to enact 20-week abortion bans nationwide. Murray is aware of its seeming-improbability, but hats off to the senator for her persistence. She told Think Progress:

Now, I know there are those [Congress members] who will say "no" right off the bat. And my message to them is: I’ve heard that before. It hasn’t stopped me.