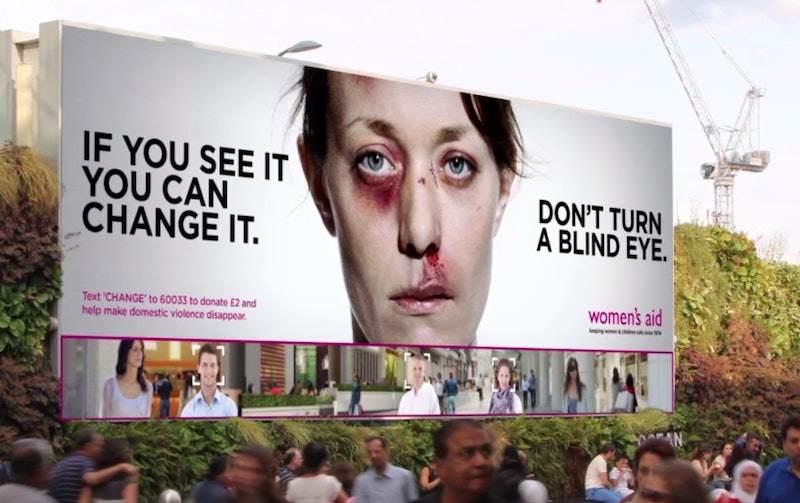 A single image can speak volumes if used to its fullest advantage. This Sunday, March 8, the world will celebrate International Women's Day — but one group has already taken the initiative and planted that seed of change early. London marketing and advertising agency WCRS released a set of billboards intended to shine a spotlight on domestic violence this week, and according to AdWeek, which reported on the campaign, they're more than your average public awareness poster.

The billboards, the first of which premiered today at Canary Wharf in London, are meant to draw attention to the growing trend of domestic abuse by employing facial recognition technology. The billboard itself shows the image of a woman's face, marked by bruises, cuts, and a black eye. As passersby stop to look at the board, a small camera captures their image and prompts the billboard to change, slowly "healing" the woman's wounds as more and more individuals look at it.

If no one looks at the billboard, the image remains the same. The campaign has already won major accolades at British ad-space company Ocean's annual Art of Outdoor competition, which rewards organizations for their digital creativity in advertisement, in the Interactive category.

At the bottom of the billboard is a livefeed panel displaying images of the onlookers, which the company hopes will draw even more attention. Anyone "within proximity of the billboard" will also receive a text message via Weve, a mobile marketing venture by three of the UK's largest phone companies, "[encouraging] them to donate to Women's Aid", writes WCRS.

Often people don’t want to see domestic violence or do something about it because it feels too difficult or they’re worried what they do won’t have any impact. They turn a blind eye because of this, leaving women isolated and making it even harder for them to get help.

We want to show this International Women’s Day that anyone can 'Make it Happen', and everyone can help put a stop to domestic violence, by noticing it, by donating to Women’s Aid, and to making sure their communities don’t tolerate the sexist attitudes that lead to abuse. That’s what we hope to achieve with this advert.

The ad follows a handful of anti-domestic violence campaigns by high profile companies in recent days. On Feb. 1, the NFL and domestic violence awareness organization No More aired a chilling commercial during the Super Bowl XLIX broadcast, which featured a reenactment of an actual conversation between a 911 dispatcher and an abused woman pretending to order a pizza in order to call a police officer to her home. The advertisement drew criticism for "throwing money" at the problem of domestic violence issues in the NFL, but it was a step in the right direction, regardless.

Women's Aid released a similarly unsettling advertisement, entitled "Blind Eye", in 2012 , which asked audience members to alternate between closing one eye at a time in order to understand the dual faces of domestic violence. As viewers watched a seemingly mundane but loving scene between a husband and wife with one eye, the other eye showed the reality of the abusive relationship, promoting the understanding that domestic abuse can occur in any home at any time, regardless of what outer appearances might suggest.

The new billboard currently stationed at Canary Wharf will make its way to Birmingham Bullring and Westfield London on Sunday. And if busy commuters find the advertisement troubling, at least they'll remember it.