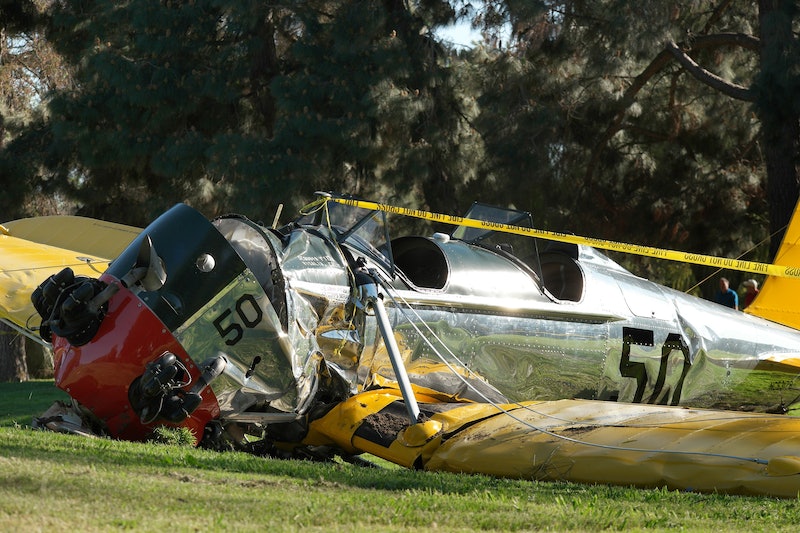 On Thursday, CNN reported that actor Harrison Ford had been injured after crash-landing his single engine plane into a golf course near the Santa Monica Airport in California. CNN aviation analyst Miles O'Brien estimated it was likely that Ford's two-seat 1942 military trainer had suffered spontaneous engine failure before dropping onto the Penmar Golf Course greens. Although both Ford's family and Los Angeles Fire Department Assistant Chief Patrick Butler later confirmed that Ford's injuries weren't life-threatening, the incident has called into question the safety in amateur pilots flying small, private aircrafts.

While it's true that the likelihood of being involved in a plane crash is vastly lower than the likelihood of being injured on the drive to the airport, a 2014 report by The Washington Post surmised that the probability of injury or fatalities skyrockets when flying in a smaller plane. According to statistics out of the National Transportation Safety Board (NTSB), over 400 people perished in "general aviation" crashes (which includes private aircraft, gliders, and balloons) in 2012. That number dropped only slightly (down to 387) in 2013. More importantly, perhaps, the NTSB also reported that the majority of small aircraft likely crash due to a loss in in-flight control or vision problems.

In December, for example, a small Embraer EMB-500/Phenom 100 twin-engine jet crashed into a suburban home in Gaithersburg, Md., killing six people, including a mother and her two young children. Officials later stated that the aircraft, praised for its lightweight build and detailed piloting systems, had suffered no noticeable issues. What was concerning, they noted later, was that the crash was most likely caused by failure on the part of the experienced pilot to bring the plane down to the runway at an acceptable speed.

It wasn't a wholly unusual circumstance. Despite hours of training and logged air time, amateur pilots are exactly what their titles suggest: amateur. According to a report by The Washington Post, the rules for these pilots are much looser than those for professionals, who are required to register more training hours and are subject to stricter guidelines. The NTSB also explains that bad weather conditions only worsen an amateur pilot's abilities, reported The New York Times in 2014, as they expose unforeseen vulnerabilities in their training.

Whether or not Ford's aircraft was functioning normally before his unfortunate crash landing on Thursday might not have mattered; Even the most experienced of amateur pilots can be jarred into losing control if enough poor conditions and technical difficulties coalesce at exactly the wrong moment. If you're planning on flying in a small aircraft anytime soon, go ahead — but be forewarned.