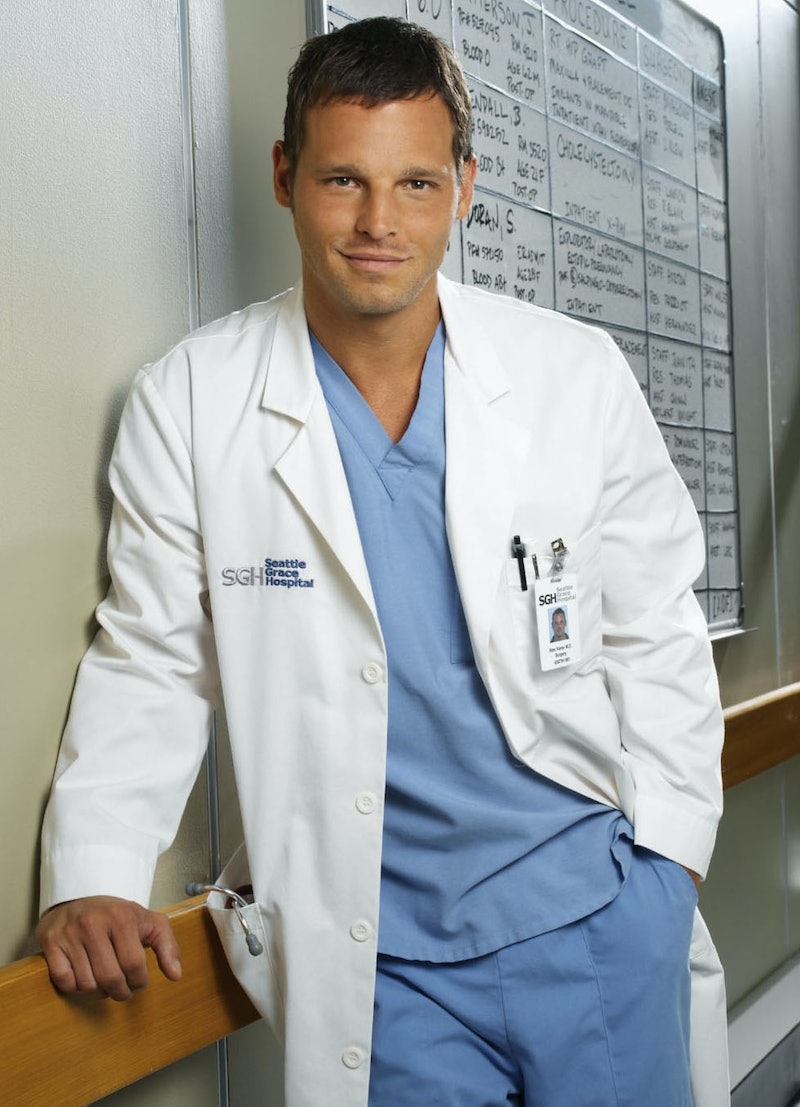 After 10 tumultuous, Emmy-winning, scandal-filled seasons on air, it's hard to believe that anything on Grey's Anatomy could be considered underrated. But despite all the show's on- and off-screen drama, from Isaiah Washington's abrupt exit back in Season 3 to Season 6's famous shooter-in-the-hospital episode to the Calzona crisis of 2013, one element of Grey's has been consistently overlooked: the character of Alex Karev.

Like all his fellow doctors at Grey-Sloan Memorial, Alex (Justin Chambers) has undergone tremendous change over the course of the series. Yet, unlike Meredith's transformation from depressed, "dark and twisty" tequila drinker to happy, mature mom, or Kepner's development into a strong-willed doctor from an annoyingly angelic resident, Alex's personal growth never seems to get acknowledged. And there has been growth — an enormous amount of it.

Alex begins Grey's as an arrogant, obnoxious intern who pushes away anyone who tries to care about him. He breaks Izzie's heart 1,000 times, and then acts surprised when she falls for someone else (R.I.P. Denny). He sleeps with any girl who will have him, insults everyone who doesn't, and generally enjoys being the hospital asshole. Yet, over the course of 10 seasons, Alex changes, slowly and realistically, into a genuinely good person whose faults don't miraculously disappear, but take a backseat to much better qualities.

The first sign of change begins with Izzie (Katherine Heigl). Their on-again, off-again relationship during the show's first few seasons shows Alex at his worst, yes, but it also proves that he has the capacity to love someone. He cares for Izzie much more than he lets on, and her sweet, positive personality brings out the best in him. When she moves on from him and falls for Denny, he pretends not to care, but we know he truth. And when he keeps his own heartbreak in secret in favor of helping Izzie get over Denny's death, it just proves, even further, that Alex is turning into a good guy. Getting her through her grief is a difficult, mature thing to do, and the fact that Alex goes through with it, when he could have left the task up to Meredith or Cristina, reveals the quality of his true character. Despite all the times he says, "I don't give a crap," whenever anyone asks him about Izzie, Alex truly cares.

Later in the show, as Alex dates, defends, and ultimately loses Ava/Rebecca, a Jane Doe patient at the hospital, viewers see the full extent of his complexity. He wants fiercely to protect her, and does so, to the best of his ability. He stands up for her whenever her borderline-crazy antics freak out the other doctors, and when she gets "pregnant" with his child, he is nervous but thrilled at the thought of being a father. Yet just when he finally doesn't feel the need to be the bad guy all the time, his reason for happiness gets taken away from him, due to factors out of his control. Ava/Rebecca's full issues are revealed, and Alex, forced to give her up, breaks down in Izzie's arms. It's the most vulnerable we've seen him since the show began.

And it's all because of Izzie. When the two begin dating again, it's clear that they're each other's soulmates. They're perfect compliments, and their relationship helps each other mature; Izzie becomes stronger and less flighty, and Alex learns that publicly showing that he's a good person isn't the worst thing in the world. When Izzie gets cancer, Alex stands by her side, and when they get married on the brink of her death, their love for each other is heartbreaking. This devoted, wise Alex is nothing like the Alex of Season 1, and the shift in character is remarkable, but realistic. Being with someone who truly cares for him allows Alex to get over himself, and become a decent man.

When Izzie leaves him, Alex backslides. He morphs into the rude, irritable person of seasons past, pissing off everyone around him and pretending he doesn't care. It's easy to think he'll stay this way, as long as the love of his life is gone, but he surprises us by proving that he's come farther than anyone thought. Izzie attempts to reunite, but Alex tells her that he doesn't deserve to be treated so poorly, and that they need to move on. It's a huge, mature step for a guy who once had to hurl sexist insults at Izzie just to prove that he liked her.

There are so many ups and downs for Alex over the course of Grey's — his post-Izzie promiscuity, his refusal to remove his "war wound" bullet, his relationship with Lexie, his surprising aptitude for pediatrics — but it all adds up to evidence of personal growth. This current season, with Alex, in his only serious relationship since Izzie, in love with Jo, shows just how far he's come in 10 years. He treats girls well and takes dating seriously, has embraced his charm with children and flair for pediatrics, and doesn't take his friendships with Mer and Cristina for granted. He still has his arrogance, but he's learned when and where to bring it out. Stronger and wiser than years ago, he's ready to grow up and be an adult. It's a welcome decision, and it culminates years of honest, real character development.

There's still change to come, of course; Grey's isn't over yet, and Alex still has to make things work with Jo and deal with last week's reveal of the return of his estranged father. Yet thanks to his series-long transformation, it's clear that he's capable of taking on the challenges.

This is due to the fact that more than the changes undergone by any of the others, Alex's have always felt real. His slow, bumpy transformation from obnoxious kid to mature adult makes sense, when you consider the things he's experienced: an abusive childhood, the deaths of his friends, a gunshot wound, a painful divorce, a crazy ex-girlfriend... the list goes on and on. It's realistic that these things would affect someone tremendously, and it's a testament to the quality of the show that Alex's experiences haven't gotten forgotten with each passing season, but instead have gotten molded into his current character. Alex may not be the most exciting doctor on Grey's or get the most attention from critics, but he's certainly the most deserving of praise. He's come a long way since Season 1, and we can't wait to see what's in store for his future.