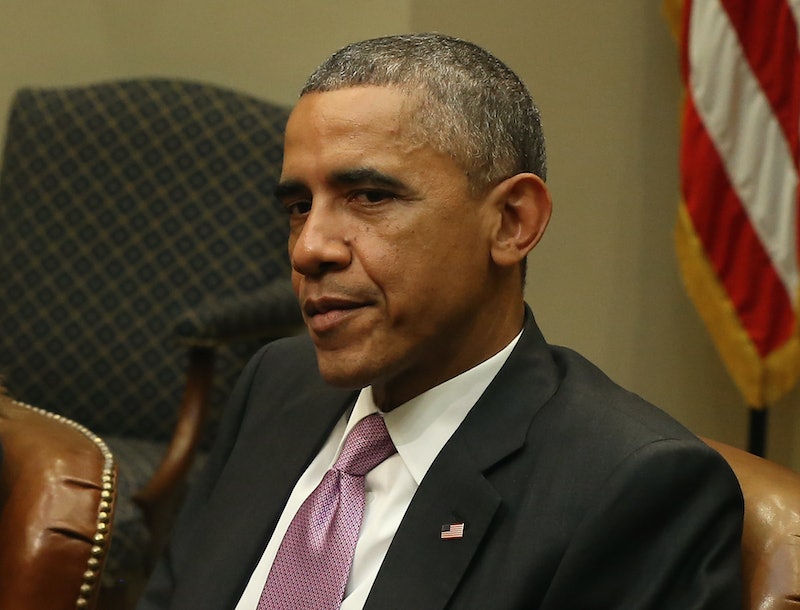 Don't look now, Ferguson Police Department, but the so-called "leader of the free world" just spoke out on you. On Friday, President Obama discussed the Ferguson PD and racial profiling writ large, calling the profoundly upsetting contents of the Department of Justice's report on "not an isolated incident." He made the remarks while speaking with Sirius XM host Joe Madison.

It's notable, not least of all because the President has long shown a reluctance to be too overt or direct on the subjects of racism and bias in America, his past forays into the Trayvon Martin shooting and the arrest of Harvard professor Henry Louis Gates having served as ammunition for some of his most cynical critics. But armed with a scathing Department of Justice report detailing overt racism within the Ferguson PD , he clearly felt liberated to at least broach the issue Friday, and did so.

And while he still wasn't exactly using fire-breathing rhetoric — generous, considering he was the target of a much-reported racist joke emailed by a Ferguson police officer — he left little doubt of his view of the scandal's broader scope while talking with Madison, as detailed by the AP.

I don't think that is typical of what happens across the country, but it's not an isolated incident. I think that there are circumstances in which trust between communities and law enforcement have broken down, and individuals or entire departments may not have the training or the accountability to make sure that they're protecting and serving all people and not just some.

To refresh your memory, the DOJ report referenced a number of overtly racist emails, an apparently apt illustration of what passes for clever humor among some of the Ferguson police. Be fore warned, it's all deeply gross, racist stuff, and incredibly childish and inane to boot — the sort of thing you'd sooner expect to hear from right-wing comment thread trolls than police officers. Some of the highlights:

African-Americans weren't the only targets of this naked prejudice — according to the report, another email contained similar bigoted taunting of Muslims — but especially insofar as Ferguson is concerned, the same city where Officer Darren Wilson went un-indicted for the shooting death of Michael Brown last year, the emphasis on anti-black racism is obvious.

For the President, Friday will mark a historic occasion, and one that makes it plain why these issues are so close to his heart — the 50-year anniversary of the historic civil rights marches from Selma, Alabama to Montgomery. Obama will be in attendance at Selma's Edmund Pettis bridge this week to commemorate its crossing back in 1965, a scene that saw black protesters marching for their rights beaten brutally by white police. While speaking about the anniversary to radio host Tom Joyner (also on Friday), Obama again mentioned the Ferguson report, discussing how he wants his daughters to see the work ahead of them.

You know, we saw the Ferguson report this week. I had my task force come in that I had assigned to provide us recommendations for action in the wake of Ferguson and New York. And there is, you know, work to be done right now. And I say to my daughters the same thing I say to the young people who work for me, and that is it is a glorious task that we are given to continually try to improve this great country of ours. And we shouldn’t shy away from that work and we shouldn’t be complacent about it. And everybody’s got to find their own way to do it.