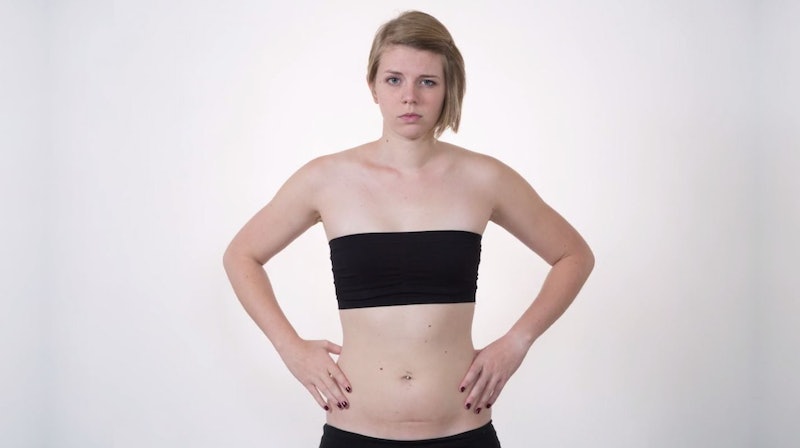 We've been talk more and more in recent years about unrealistic beauty standards, Photoshop, and body image; the conversation is an important one to be having, and the more we deal with these topics, the greater the possibility we have of leaving the unattainable behind and moving to true body acceptance, Sometimes, though, you need something bordering on the absurd to really drive the point home — which is exactly what photographer Kelsey Higley's project “Manipulated” does. Using 126 photos of herself strung together in a stop-motion video, “Manipulated” shows the literal push and pull many women (and men — body image issues aren't limited to just one gender, after all) feel for their bodies to look a certain way — even when that “certain way” is almost cartoonish in nature.

Higley, who is a senior at the University of Oklahoma in Norman, created “Manipulated” as a way to explore the concept of what makes someone beautiful in two ways: As she writes on her website, it's “a commentary on not only these unrealistic idealizations of beauty, but also… women's desire to be attractive.” The video is actually only one part of the project; the second part consists of four photographs of women digitally manipulated to fit standards from different periods in history. The video, however, is a much more personal companion piece — one that Higley describes as “[depicting] my own struggle with beauty and how my perceptions change through a much shorter period of time.”

Higley elaborated on the idea behind the video to Hello Giggles. “Being a young woman,” she said, “I have had many battles with this idea of beauty. I'll go through stages where all I want in life is to be super fit with rock hard abs and big boobs, then after a while I'll flip to the other side and tell myself that I should love and embrace the body I have. But as soon as I start scrolling through the Internet,” she continued, “my mind is flooded with images of this impossible, 'ideal' beauty.”

But maybe I should just let the images speak for themselves. Here's where she starts:

Some of the manipulations are less dramatic than others; this one, for example, still looks relatively realistic, if a little oddly proportioned:

Although the image quickly gets absurd as her waist shrinks and her breasts balloon:

She manipulates her face, as well, making her eyes larger and her lips fuller:

In some ways, the more outlandish the image, the greater the comment: This is what Higley means when she says that the project explores not only actual beauty standards, but also “women's desire to be attractive.” This is what it feels like society is telling us to look like, even if the reality isn't quite as exaggerated (although no less unattainable). It's actually a relief to see her return to her real, unmanipulated self at the end...

...But then it loops. And continues looping, on and on and on, the same way most of us go back and forth about loving our bodies, wishing they looked like someone else's body, and back again.

But projects like this can help bring us back to earth when we start feeling overwhelmed. Said Higley to Hello Giggles, “It felt very therapeutic editing each photo as my appearance became unrecognizable and less human with every click. This project reminds me that these things I categorize as my flaws are what makes me human. And I love that.” Body positivity all the way.

Watch the full video below, and head on over to Kelsey Higley's website for more: