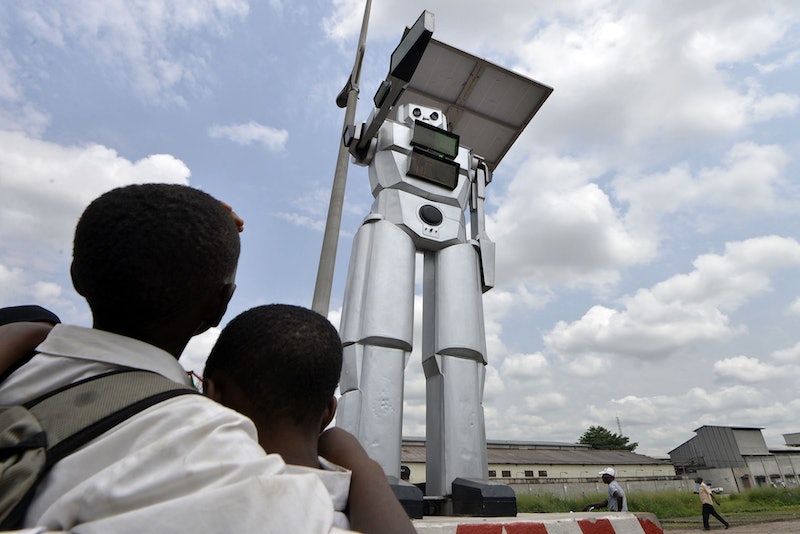 The Democratic Republic of Congo has consistently been plagued by political instability, militia attacks, and disease, so it's understandable if some city officials want to use tougher measures to enforce the law. But this? The DR Congo's capital city, Kinshasa, is using giant robots to police traffic. Literally. Five towering automatons are currently directing traffic and recording violations across the capital, making a typical day in Kinshasa look more like a scene out of Transformers than real life. However, instead of feeling fear for what appears to be the start of the robot takeover, the city's residents are loving the giant mechanic traffic cops.

In a city of 9 million people, the roads are bound to get a little congested, and traffic laws are just waiting to be broken. In an effort to combat lawlessness on the roads, Kinshasa has introduced the one thing that people will not mess with: giant robots. The humanoid(ish) machines are made of aluminum, operate on solar power, and have rotating chests equipped with surveillance cameras that send real-time traffic images to the police station and record any vehicular misconduct. The most impressive feature? Their massive robotic hands are fitted with red and green lights that let the cars know when to stop and when to go. While two of these robots have been regulating traffic in Kinshasa since 2013, three new bots were just installed this week. According to residents, the newer models, named Tamuke, Mwaluke, and Kisanga, "react much more quickly" than the older ones.

If this all sounds a bit like another bot-centric sci-fi movie, RoboCop, it should, because that's exactly what the engineers were going for. Isaie Therese, president of Women's Technology, who developed the robots in conjunction with Kinshasa's Higher Institute of Applied Technique, explained to CCTV Africa why simple traffic cameras just wouldn't do:

Our robot is a humanoid. We have taken the form of a human — it's a design quality that copies the style of a real policeman.... The robot corresponds to international standards. If a driver says he's not going to respect the robot because it is just a machine, the robot is going to take that and there will be a ticket for him.

In other words, do not mess with the robot. Here's what the older models look like (I'm really digging the shades, which the engineers say are based on the actual sunglasses that the city's human policemen wear).

Compared to this older model, Therese told the Guardian, the new ones' "electronic components work much better." And regulating traffic is not their only goal; generating revenue for the city is another major priority. Therese explained:

In our city, someone can commit an offense and run away, and say that no one saw him. But now, day or night, we’ll be able to see him in real time and he will pay his fine like in all the serious countries of the world.

She has submitted a proposal to city officials to install 30 more of these robots throughout the city.

There are certain drivers who don't respect the traffic police. But with the robot it will be different. We should respect the robot.