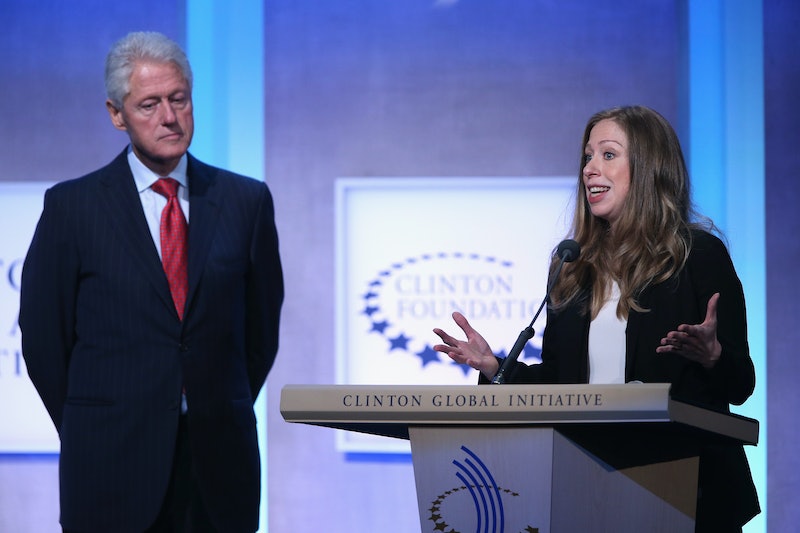 This weekend, more than 1,000 students will attend the Clinton Global Initiative University's eighth annual conference to share ideas on how to tackle the initiative's main areas of focus: education, environment and climate change, peace and human rights, poverty alleviation, and public health. Not only will participants have the opportunity to network with each other, attend skill sessions, and even work directly on community projects, they'll also hear from a roster of outstanding guest speakers at this year's CGI U conference, hosted by Bill Clinton and Chelsea Clinton.

The three-day conference, taking place at the University of Miami, will feature a full schedule of events on each day, all of which focus on tackling the initiative's five focus areas. On the first day, after a student networking reception, the conference will hold its opening plenary session titled "Fast Forward: Accelerating Opportunity For All," which aims to extend opportunity, technology, and resources to all populations across the globe and remove any existing barriers. The next day will kick off with a session on Big Data, followed by workshops on each of the five focus areas and "office hours" with special guests.

Besides remarks from Bill, Chelsea, and Donna Shalala, president of the University of Miami, each session will feature special guest participants, from actress America Ferrera to the United States Surgeon General. Get to know the industry leaders, Nobel Peace Prize laureates, and inspirational peers who will be speaking at this year's CGI U conference.

Sure, you may know Ferrera as Ugly Betty, but the actress has advocated for immigration reform, raised awareness of sex trafficking in India, and served as ambassador for Save the Children.

Yemeni journalist and founder of Women Journalists Without Chains Tawakkol Karman received the Nobel Peace Prize in 2011 for her human rights contributions.

Paul Lorem went from no electricity in South Sudan to hitting the books at Yale University. He's a prime example of how hard work can defy the odds to help one obtain a better life.

Gro Harlem Brundtland, the former prime minister of Norway and director of the World Health Organization, is currently a Special Envoy on Climate Change with the UN and an international leader in public health.

Masha Alekhina and Nadya Tolokonnikova are two members of the Russian feminist collective Pussy Riot, which can be described as part punk band, part protest group. Pussy Riot advocates for gender, LGBT, and human rights, and has become a symbol of anti-authoritarian Russia.

Other speakers and special participants at the conference include: