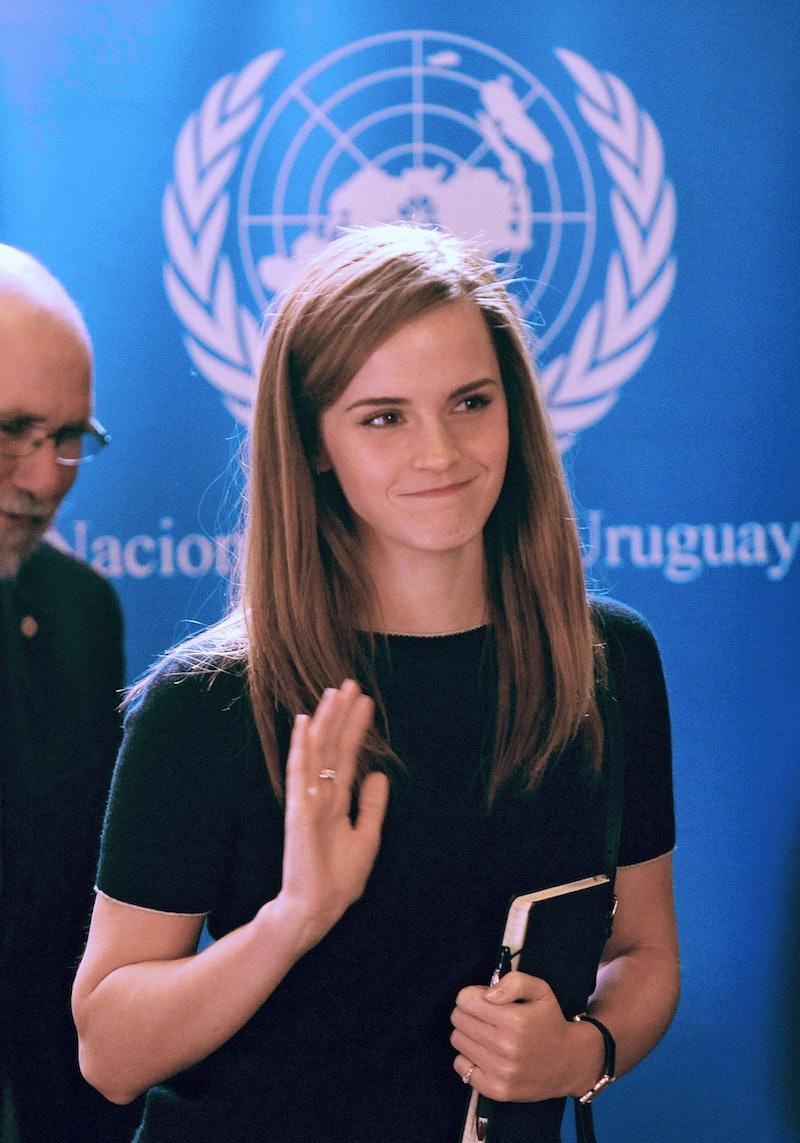 This Sunday is all about women. Across the globe, women’s accomplishments will spend a day basking in the spotlight for the 104th annual International Women’s Day (IWD). Everywhere from Albania to Zimbabwe, events will be held celebrating women’s “economic, political, and social achievements” in the “past, present, and future,” the IWD website says. Even Emma Watson — champion of women's rights and all that is good and right in this world — is speaking as the UN Women Goodwill Ambassador, which you can watch here. In some countries, it’s even a national holiday. The theme for all the IWD festivities this year? “Make it happen.”

Looking at women’s accomplishments from just the past year proves we certainly are making it happen. From 17-year-old Malala Yousafzai winning the Nobel Peace Prize — marking the 16th woman ever to win — to a record number of women taking seats in Congress, we’ve done a lot. Admittedly, there’s still a lot of work to be done, but for now put on your party hats, ladies, and look at what we have done and the amazing women in our company.

We have a lot to celebrate on Sunday.

1. A record number of women in Congress

When Rep. Alma Adams (D-N.C.) won a seat in Congress in last fall’s midterm elections, she also made a big win for women. This year, the number of women serving in Congress reached an all-time high of 100, and it was Adams who snagged the 100th slot.

2. A spotlight on the problem of campus sexual assault

Columbia University student Emma Sulkowicz drew the nation’s attention to the issue of sexual assault on college campuses in a big way when she lugged her mattress around campus with her. Sulkowicz pledged to continue carrying her mattress day in and day out until a classmate, whom she says raped her in her dorm during her sophomore year, was either expelled from Columbia or left.

3. A roll of the eyes for society's unrealistic body standards

Women’s bodies have long faced the unrealistic standards and scrutiny of society and for a while, Barbie was one of the prime examples of promoting a body that was far from attainable. This ad featuring a Barbie with a “normal” body knocks those standards down in favor of promoting happy, healthy bodies.

In 2014, 17-year-old Malala Yousafzai became the youngest person and the 16th woman to ever win the Nobel Peace Prize for her efforts advocating for women to have more access to education.

5. A girl who can throw further than the boys

13-year-old Mo'ne Davis knocked the notion that boys are more athletic than girls out of the ballpark this year. Davis not only led her team to the Little League World Series, she also was named Sports Illustrated “SportsKid of the Year.”

6. A night of television taken over by women

In the still overwhelmingly male-dominated world of Hollywood, women got a night of television all to ourselves this year. On Thursdays in fall 2014, three shows with strong female leads — Grey’s Anatomy, Scandal, and How to Get Away With Murder — all aired on the same night. We have a woman to thank for this — Shonda Rhimes.

Getty Images finally nixed its stereotypical stock images of women in favor of the “Lean In Collection.” Photos now show women being leaders and being powerful, instead of in old-fashioned gender roles.

Michelle Howard made history in the U.S. Navy this year when she became the first women ever to be promoted to the rank of four-star admiral.

One point for women in the fields of science and mathematics. This year, Stanford professor Maryam Mirzakhani snagged the highest honor in the field of mathematics: a Fields Medal. She was the first woman to ever win this award.

10. A start to the tough conversations

In the last year, we finally started conversations about domestic violence. After the video of football player Ray Rice beating his then-fiance Janay in a hotel elevator surfaced, the Internet responded. The hashtags #WhyIStayed and #WhyILeft trended on Twitter as people shared their own stories of abusive relationships.

11. A breakthrough in equality at the Olympics

After 90 years, women were finally allowed to join men and compete in Olympic ski jumping. Absurdly enough, the reason that women weren’t allowed to compete previously was because men were afraid it would damage women’s uteruses.

Becky Hammon made history in the sports world when she was hired to be the San Antonio Spurs’ assistant coach. Hammon is the NBA’s first-ever full-time female coach. Even better? Hammon's response: “I don’t want to be hired because I’m a woman. I’m getting hired because I’m capable.” Amen to that.

13. The embrace of feminism

This year, being a feminist became a lot more popular. Beyoncé danced in front of the word feminist at the 2014 Video Music Awards and celebrities like Taylor Swift, Emma Watson, and Joseph Gordon-Levitt spoke out up for gender equality and women’s rights.

Supreme Court Justice Ruth Bader Ginsburg was especially badass this year, especially when, in an interview with Katie Couric, she said the best gender ratio for the Supreme Court would be all women. Now there’s girl power.

More like this
The David Beckham Qatar Controversy, Explained
By Sophie McEvoy
Looks Like Jack Grealish Found The Sandy To His Danny
By Sophie McEvoy
Footballer Jake Daniels Shared His Thoughts On A World Cup Boycott
By Sam Ramsden
Romeo Beckham Shared A Sweet Farewell Note From “Proud” Sister Harper
By Sam Ramsden
Get Even More From Bustle — Sign Up For The Newsletter