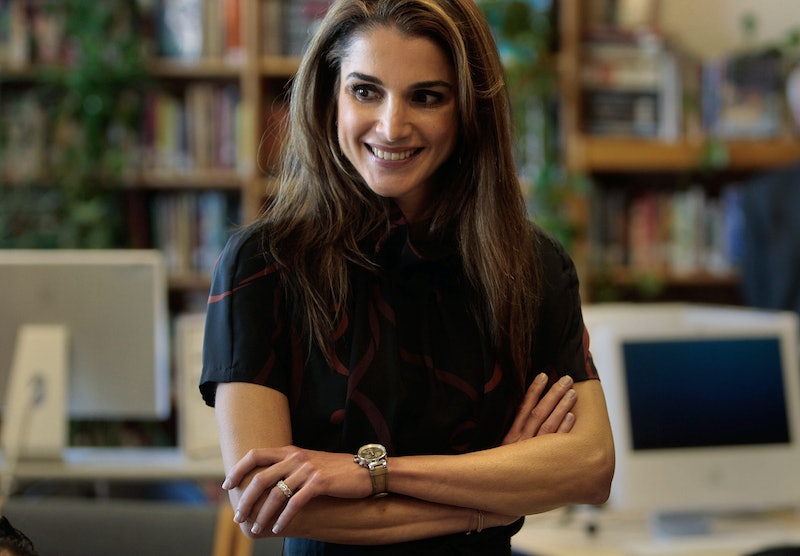 In the right hands, social media can be powerful — in the wrong hands, it has the power to destroy. There's no one who knows this better, of course, than Jordan's Queen Rania Al Abdullah. Planted firmly amidst a cluster of turbulent Middle Eastern borders, the Hashemite Kingdom stands as a beacon to Syrian refugees and a stronghold against the growing militant fundamentalist threat, and Queen Rania knows it. But to convince the rest of the world of the resilience and goodwill of her country and their regional counterparts, it will take more than typical photo ops and press interviews — social media, says Queen Rania combats both Islamaphobia and ISIS in one swift move.

In an interview with Mashable on Friday, Her Majesty expounded on her belief in the power of social media. "Sometimes it can be hard to connect with people when you’re a 'queen'," she said. "To some extent, I think social media has opened a window into my life and helped demystify who I am and what I do." The altruistic royal certainly knows how to amass a community, reports Mashable, playing digital neighbor to millions of Twitter, Facebook, and Instagram followers on a regular basis.

Stories and our desire to share them are universal. Technology simply offers new creative ways to tell them, and have them reach more people ... Social media can also make us better listeners, more empathetic, more accepting and more aware of the millions of tales around us, big and small.

Speaking to the current ISIS threat, Her Majesty criticized the group's use of modern technology to paint the Middle East in a disreputable light.

... The fight we have on our hands in the Middle East is as much over narrative as it is over territory. And unfortunately, ISIS has successfully managed to use modern media tools in this fight to propagate their radical beliefs. And it reflects negatively on all of us in the region.

ISIS leaders are taking a revolutionary approach to recruitment and tactical distribution, employing social media platforms like Twitter to gather followers and potential fighters. According to The Atlantic and Arabic publication Al Arabiya, in 2014, ISIS launched a Twitter app called "The Dawn of Glad Tidings" in order to disseminate critical propaganda and missives. The app also posts tweets to users' timelines for them. Those tweets, which are sent out en masse, allow for the group's chosen topic to soar to the top of Twitter's global trends, and, says The Atlantic, further intimidate local residents in regions mentioned in the social media posts.

Queen Rania hopes to use that very same technology to outsmart and outshine the terrorist group. "Too many people have a single story of the Arab world," she told Mashable on Friday. "Like it or not, we are being defined by a narrow narrative — their narrative — which is dominated by extremism, hatred, conflict, crisis and chaos." Her Majesty took the time to challenge the "moderates" of the world to "tell a different story".

"We must take back the power to define who we are," she explained. "... There is more to the Arab world than the extremists would have them believe."

In a 2009 interview with TechCrunch, Queen Rania was quick to point out that it really was her behind the glassy screens and endearing hashtags, despite what some of her detractors might allege.

Of course, I tweet. Tweeting is a very personal form of expression. Who else could talk about my son refusing to wear a suit to meet the Pope, my husband flying a helicopter, or take a twitpic from our home?

Tweetdeck and Twibble, she said, were her go-to platform managers (naturally).