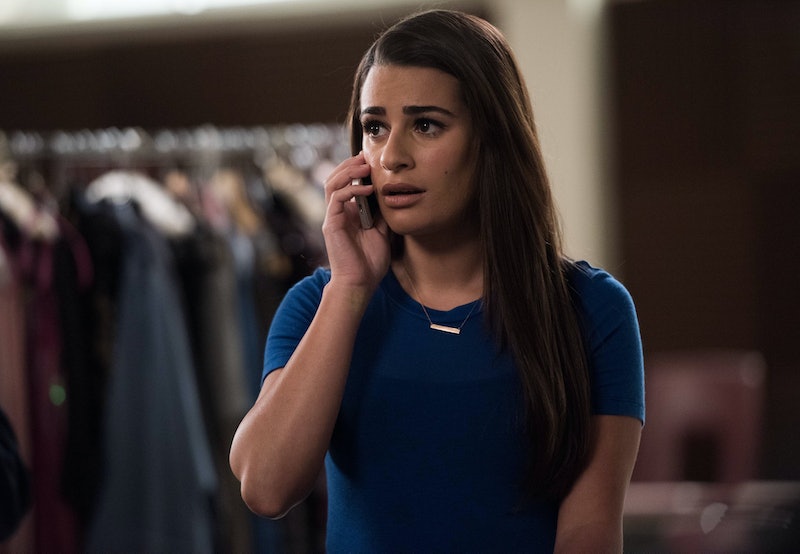 Rachel Berry's comeback tour is all set to begin again, but some people aren't too happy with the direction she wants to move forward. On Friday night's episode of Glee, "The Rise and Fall of Sue Sylvester," Rachel tried desperately to get Madam Tibideaux to grant her re-entry into NYADA so that she could figure out a way to get her life bound for the stage back on track despite it being an almost impossible task. And the good news came quickly: Not only did Madame Tibideaux agree to let Rachel back into her school which no one ever thought would happen, Rachel also got a role in Russell Simmons' new musical, the show in which Mercedes got her an audition. Rachel immediately chose taking the role on Broadway over her education, and while most of her loved ones were on board, Sam was most certainly not, which created some friction between the new possibly official couple.

While it's possible Sam was just worried about Rachel leaving him behind so quickly, he told Will that Rachel should go back to school and finish her education. It's not just because he believed Rachel having a college education was important (which was a weird thing for him to say considering he doesn't have a college education), but because he didn't want her to make the same mistakes she had already made. Rachel was none too pleased about that comment.

Rachel, on the other hand, believes that returning to New York is the most important thing, not school, not getting an education. She needs to be on the Broadway stage, and what better way is there to be successful and become a Broadway icon in the vein of her idols like actually doing a Broadway show?

I can understand both points of view on this topic, being in a show is an incredible experience, I'm sure. And getting an education is incredibly important regardless of how many successful actors in Hollywood have not gotten them. But I wonder if Rachel has actually thought through to what might happen if her new Broadway musical didn't do well? What if no one came to see it? What if the reviews were terrible and it closed after only a week of performances? Then where would she be?

Obviously yes, she could put on her resume that she was in two Broadway shows and that would get her into more audition rooms. And she's obviously talented enough to make it to the stage. But wouldn't she benefit from having the knowledge that NYADA could provide? Wouldn't she feel better that she finished school, met the right people and networked and impressed enough that it could eventually lead her to getting bigger and better roles in the future?

I'm not saying that Rachel is wrong, I'm not saying Sam is wrong. All I'm saying is that they both have valid points. But what does seem wrong is how quickly Rachel drops the idea of her future education that she worked so hard to get back without even a second thought to consider what Sam is trying to tell her. Rachel basically tells Sam that his opinion means the most to her, and yet she's just willing to drop it and get annoyed with him when he actually gives an opinion she doesn't share. That's not fair, and that doesn't seem like the right way to treat a partner or a future. In the end, it's about weighing the long-term benefits. Hopefully Rachel takes some time to make a decision before rushing into something and once again failing before she can really succeed.