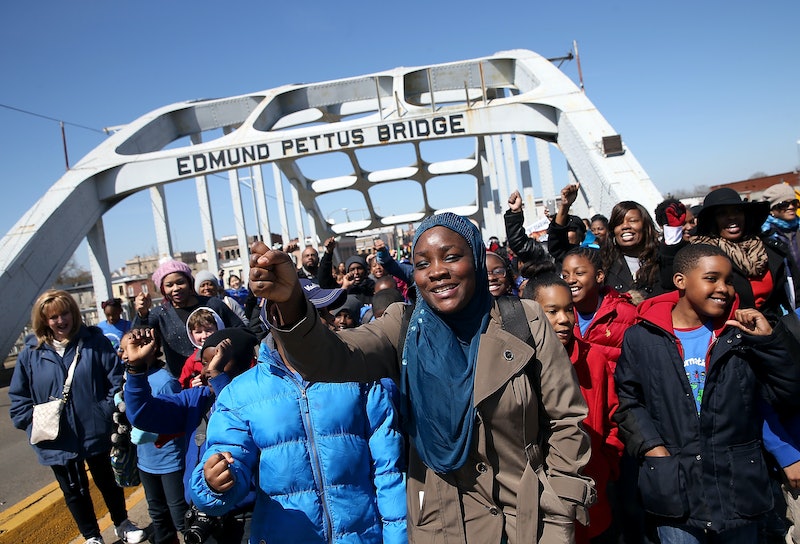 Saturday marks the 50th anniversary of America's Bloody Sunday — the day back in 1965 when hundreds of African-American protesters were assaulted by Alabama state troopers after crossing the Edmund Pettus Bridge in Selma, Alabama. The protesters were on their way to Montgomery, the state capital, in one of the first marches for equal voting rights for African-American citizens. Nearly 20 of the peaceful demonstrators were hospitalized that day, with many more left bruised and bloodied from the attack.

Two days later, on March 9, 1965, civil rights leader Dr. Martin Luther King, Jr. led more than 2,000 activists across the now-infamous Selma bridge on what would later be known as "Turnaround Tuesday." However, that march was also cut short, with King turning the group around and crossing back over the Edmund Pettus Bridge into Selma. It would take another two weeks, the death of Unitarian Universalist minister James Reeb, and the introduction of the Voting Rights Act before the thousands of civil rights activists completed their march from Selma to Montgomery.

On Saturday, President Obama is scheduled to speak in honor of the 50th anniversary of the heroic Selma march. "Selma is now," Obama said during a town hall speech in South Carolina on Friday. "Selma is about each of us asking ourselves what we can do to make America better."

But the president is hardly the only person commemorating the anniversary on Saturday. Thousands traveled to the historic Alabama, including dozens of U.S. politicians, artists, and activists, including one of the original leaders of civil rights movement, Rep. John Lewis. As part of the "Big Six" civil rights activists in the 1960s, Lewis was present at the original Selma march, and was beaten by Alabama state troopers on Bloody Sunday 50 years ago.

Here's what the scene at Selma looked like on Saturday...