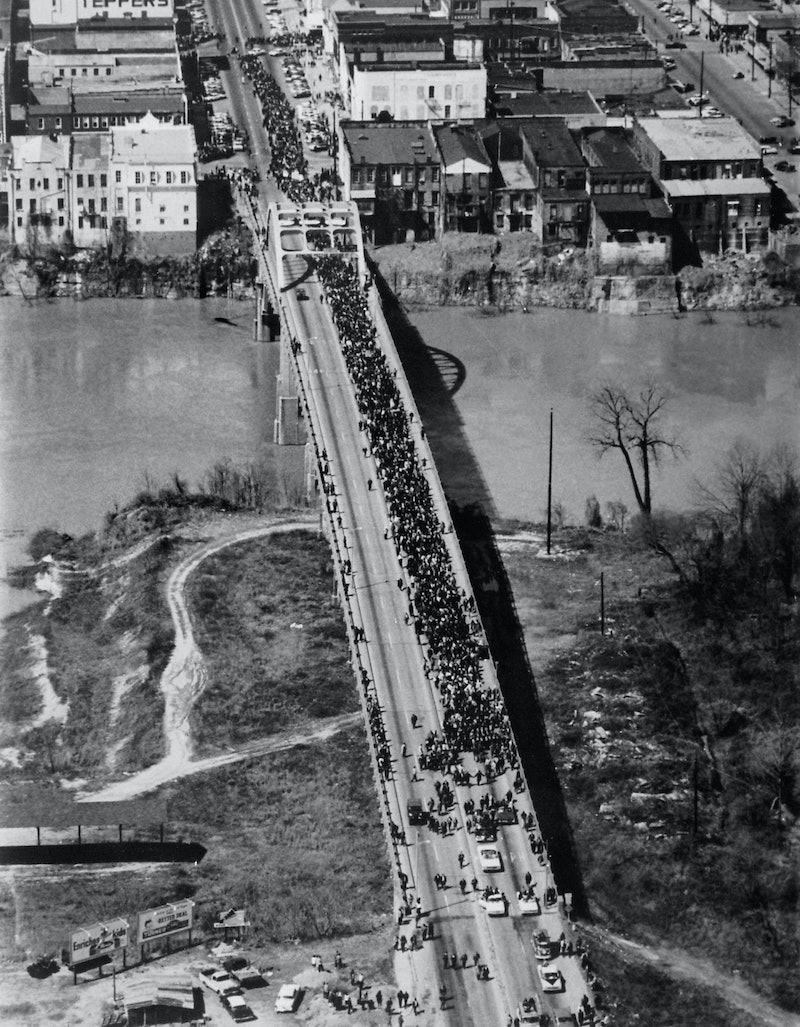 Saturday marks the 50-year anniversary of a historic day in the American civil rights movement. The infamous Bloody Sunday of 1965 Alabama, when civil rights protesters were beaten and teargassed while attempting to march from Selma to Montgomery. It's a chapter in America's legacy of racism, activism, and progress, and it's rightly getting its due attention this afternoon — President Obama is speaking at the Selma commemoration, the first black President standing at the site of one of the civil rights movement's most crucial events.

Obama wasn't the only politico at the event, most notably joined by Georgia Democratic Representative John Lewis. Now 75 years old, Lewis was one of the youngest civil rights leaders of the 1960s, and was serving as chairman of the Student Nonviolent Coordinating Committee (SNCC) in 1965 when the Selma march took place. Like so many others, he faced beatings at the hands of a white law enforcement cabal determined to keep the activists from crossing the Edmund Pettus Bridge. Now, in the same place just 50 years later, he introduces the first black American to win the nation's highest office.

It comes as little surprise that this would be a deeply personal speech for Obama, considering the incredible weight of America's civil rights history that sits atop that bridge. While he's always been a stirring orator, his remarks before the assembled crowd in Selma are thick with emotion and moral force. He ran the gamut, from memorializing the human cost of the civil rights struggle, to reflecting on how things have improved and some haven't, to launching a full-throated, fiery defense of the Voting Rights Act, the landmark law spurred by the events of Bloody Sunday. Here are some of the highlights, per a transcript at TIME:

We gather here to celebrate them. We gather here to honor the courage of ordinary Americans willing to endure billy clubs and the chastening rod; tear gas and the trampling hoof; men and women who despite the gush of blood and splintered bone would stay true to their North Star and keep marching toward justice.

While Obama doesn't have the prominent reputation as a person of faith that more overtly religious politicos do (like former President George W. Bush, who was in attendance with his wife Laura), he's never been shy about invoking scripture when it suits him, especially in his deeply felt, more personal speeches. And while memorializing the struggle of Selma, he did just that.

They did as Scripture instructed: “Rejoice in hope, be patient in tribulation, be constant in prayer.” And in the days to come, they went back again and again. When the trumpet call sounded for more to join, the people came – black and white, young and old, Christian and Jew, waving the American flag and singing the same anthems full of faith and hope. A white newsman, Bill Plante, who covered the marches then and who is with us here today, quipped that the growing number of white people lowered the quality of the singing. To those who marched, though, those old gospel songs must have never sounded so sweet.

In time, their chorus would reach President Johnson. And he would send them protection, echoing their call for the nation and the world to hear: “We shall overcome.”

One of the major strengths of the speech, and a very welcome one at that, was how Obama framed the fight against anti-black racism in a broad context, drawing parallels to historical oppressions faced by Asians, Latinos, gays and lesbians, and people with disabilities.

Because of campaigns like this, a Voting Rights Act was passed. Political, economic, and social barriers came down, and the change these men and women wrought is visible here today in the presence of African-Americans who run boardrooms, who sit on the bench, who serve in elected office from small towns to big cities; from the Congressional Black Caucus to the Oval Office.

And on the topic of the keystone legislation that emerged from the bloodshed in Selma, Obama couldn't have spoken with more ardor or intensity. Referencing the history of bipartisan action on renewing the Voting Rights Act, Obama gave a withering condemnation of so-called "voter suppression" laws, the voter ID initiatives being pushed by GOP-led states across the country.

Right now, in 2015, fifty years after Selma, there are laws across this country designed to make it harder for people to vote. As we speak, more of such laws are being proposed. Meanwhile, the Voting Rights Act, the culmination of so much blood and sweat and tears, the product of so much sacrifice in the face of wanton violence, stands weakened, its future subject to partisan rancor.

How can that be? The Voting Rights Act was one of the crowning achievements of our democracy, the result of Republican and Democratic effort. President Reagan signed its renewal when he was in office. President Bush signed its renewal when he was in office. One hundred Members of Congress have come here today to honor people who were willing to die for the right it protects. If we want to honor this day, let these hundred go back to Washington, and gather four hundred more, and together, pledge to make it their mission to restore the law this year.

By all means, if you have the time, watch the President's speech in full yourself. You could very well go the whole rest of your life without seeing one quite as meaningful as this, and if I had to bet, I'd reckon it'll go down as one of his best ever. Thanks very much, Mr. President — and everyone who gave or risked their lives for this noble cause.