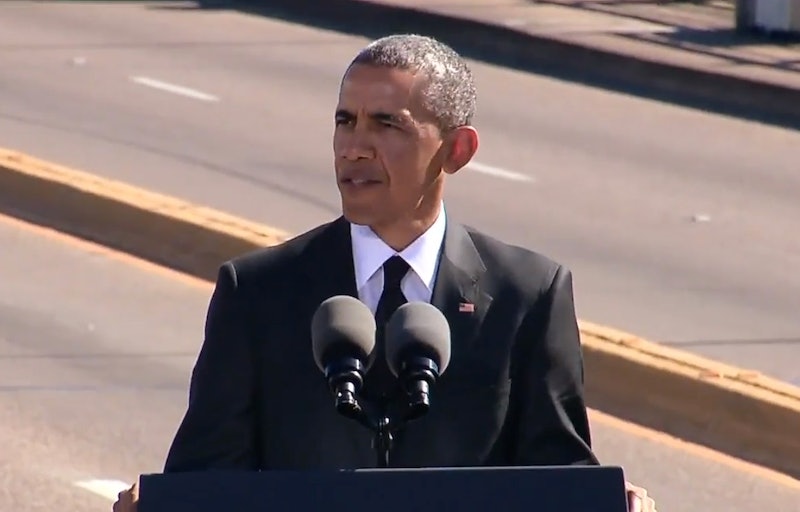 Sometimes, you just know you're listening to history. On Saturday, March 7, 2014, the 50-year anniversary of the Selma civil rights march, President Obama addressed a crowd at Edmund Pettus Bridge, the site of the infamous Bloody Sunday, and it was a doozy. Walking the assembled crowd through the perilous triumphs of the civil rights movement, the similar struggles of other marginalized minority communities, and the moral imperative to protect the Voting Rights Act, he gave it everything he had. Basically, you should read President Obama's powerful Selma speech, because you might never hear another president give one quite like it.

From the moment he strode on the stage, following civil rights hero and Georgia congressman John Lewis, you could feel the gravity of the moment. Kicking things off with an offhand, affectionate remark to onlookers in the crowd — "you know I love you, too" — he began delivering his virtuoso speech. Of course, not everyone has the time or the ability to watch a whole speech. Or maybe you're just the type that revels in the written word and you'd rather kick back and get your day's worth of reading in.

Well, you're in luck. The White House's full transcript of Obama's powerful Selma speech (as presented by Mashable) makes for a great read.

That sure is a mouthful, huh? Despite the speech's 30-plus-minute length, and the ebb and flow of Obama's deliberate tones, it did seem to fly by in real time, and that's a testament both to its preparation, delivery, and the magnitude of the event. Make no mistake, as the first black President in American history, no other person could give a speech commemorating the Selma march quite like this. And, in my eyes at least, he turned in an absolutely transcendent performance.