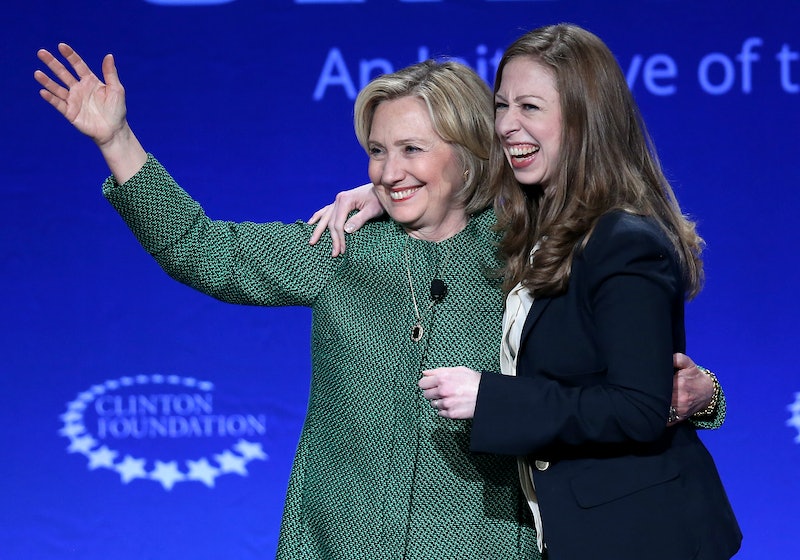 For too long, we have gone unnoticed, underrepresented. Despite decades, no centuries, no millenia of efforts to march towards gender equality, the overwhelming fact of the matter remains — there is still a glass ceiling for many women, and while a few have shattered it and some shards have been broken, our gender, as a whole, is not there yet. That is the message advanced by the Clinton Foundation's No Ceilings and Not There initiative, which celebrates women by noting their absence. On International Women's Day, a day dedicated to celebrating the progress made by women, publications like Vogue, Allure and a multitude of others are taking women off their covers in order to make people wonder — why exactly aren't women here... yet?

Last year, the Clinton Foundation launched No Ceilings: The Full Participation Project, in an attempt to motivate women (and men) to advance the cause of gender equality to their full capacity. But this year, in conjunction with the Bill and Melinda Gates Foundation, Hillary, Chelsea and Bill Clinton have taken things a step further, launching a data-driven approach to gender equality in the form of NoCeilings.org. It has been 20 years since Hillary Clinton gave her now famous "Women's Rights Are Human Right's" speech at the United Nations Fourth World Conference on Women in 1995, and while progress has certainly been made, a "deeper look into the data," No Ceilings points out, "shows we're not there yet."

While we celebrate the existence of International Women's Day on March 8, the need for such a day, much like the need for Clinton's reminder that human rights are women's rights and vice versa, is a stark reminder of just how much work has yet to be done. The celebration of our gender far exceeds a 24-hour period, and our accomplishments should be noted over the course of more than one calendar event. We should not have to wait 364 days every year to come together to note how far we've come, and how far we've yet to go. And when it comes to how far we've yet to go, the data advanced by the Clinton and Gates Foundation shows that we — women and men together — have our work cut out for us.

According to NoCeilings.org, "Women spend significantly more time than men each day on unpaid domestic work, such as household tasks and taking care of children, sick family members, and aging parents," which means that "they more frequently risk their jobs or work at a reduced level and salary to provide care at home." In India, for example, women spend an average of 5 hours and 52 minutes more than men doing unpaid work, and women in the U.S. don't fare much better, spending an average of 4 hours and 8 minutes more on unpaid work.

Still today, one in every four women is married before her 18th birthday, leading to significant barriers to women's education and pursuance of jobs and careers of their own. In fact, worldwide, whereas 71 percent of national governments and constitutions protect a woman's right to primary education, only 32 percent protect a woman's right to secondary education. This means that nearly seven out of 10 women across the world are not guaranteed access to middle and high school, ending their schooling career after an elementary education.

Violence against women remains a scourge on humanity's global reputation, with one in three women suffering either physical or sexual assault over the course of her lifetime. While many more countries have implemented laws to protect women against such violence, enforcement of these mechanisms is often week, highlighting the discrepancy between what is deemed acceptable by law as opposed to society.

200 million fewer women than men in the developing world have access to the Internet, and this is a crucial tool to establishing gender equality, as getting online is often the key to getting a job or getting an education in less developed nations. And despite the fact that "women in many countries complete equal if not higher levels of education than men," this schooling does not manifest itself in presence in the boardroom. Still, the number of women at the helms of companies is woefully low — in 2014, the number of female CEOs of Fortune 500 companies reached a "historic high," a paltry 4.8 percent. Moreover, and perhaps most depressing of all, NoCeilings.org points out that "the gap between the number of women and men in the workforce has barely changed in two decades," and women remain significantly underpaid when compared to their male counterparts.

The data that is available paints an already telling picture of the remaining progress that has yet to be made, but the Gates and Clinton combined effort has also proven how little we still know about women across the world. In 2014, No Ceilings notes, "Data2X (an initiative with many partners, housed at the United Nations Foundation) identified 28 high-priority data gaps related to women and girls. These gaps span five subject areas essential to female wellbeing and empowerment: health, education, economic opportunities, political participation, and human security." One of the largest impediments to women's progress is remaining unaware of where and to what extent these obstacles exist, and as such, knowledge really is power in this scenario.

To commemorate the obstacles and to bear witness to the fact that, in spite of all the incredible achievements that should be celebrated on International Women's Day (and every day), the Clinton Foundation and the Not There initiative is asking women to tell the world that we're simply not there (yet) when it comes to gender equality. Rather than splashing women's faces across covers and social media, this year, for a brief period of time, women will be absent to prove a point — we should everything but missing when it comes to the global landscape.

Two decades ago, Hillary Clinton proclaimed, "If there is one message that echoes forth from this conference, let it be that human rights are women's rights and women's rights are human rights once and for all. Let us not forget that among those rights are the right to speak freely — and the right to be heard." Two decades later, the world still hasn't quite heard us. So on March 8, join the No Ceilings and Not There efforts to raise your voice and hide your face, and take a stand on the overwhelming necessity of gender equality.