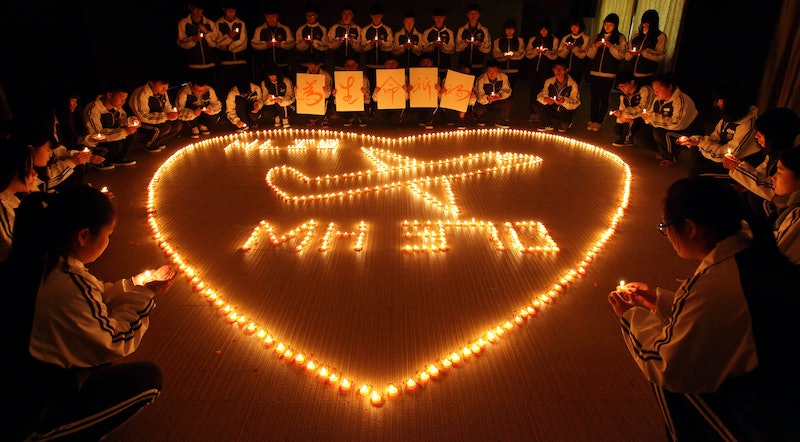 In the year that has passed since the tragedy of Malaysian Airlines Flight MH370, little good news has been delivered to family members and loved ones of the 239 passengers aboard the plane. And on the anniversary of its disappearance, a detailed report delivered even more disappointing, and indeed, rather infuriating news — the battery of the MH370's locator beacon expired more than a year before the jet embarked on its final journey on March 8, 2014, only lessening chances of the plane's discovery. The battery, which actually expired in December 2012, went unnoticed and unreplaced due to a computer glitch, and while the battery could have still technically been in working condition in 2014, the report noted that "it is not guaranteed that it will work or that it would meet the 30-day minimum requirement."

The in-depth report, published Sunday, offers little by way of answers for grieving families, except to show that everything appeared to operate as business as usual that fateful March day. The 584-page report spoke largely to the mundanity of the flight's status, including the near perfect health record of the flight crew, with "no behavioral signs of social isolation, change in habits or interest, self-neglect, drug or alcohol abuse of the captain, first officer and cabin crew," as well as the absence of any particularly dangerous weather conditions at the time of the plane's disappearance, and the satisfactory operation of the plane's transponder system. But despite checking off all these standard boxes, the Malaysian government and flight officials have remained unable to explain exactly what went wrong one year ago.

Malaysian prime minister, Najib Razak, promised to continue efforts related to the search, and noted, "The lack of answers and definitive proof – such as aircraft wreckage – has made this more difficult to bear. Together with our international partners, we have followed the little evidence that exists. Malaysia remains committed to the search, and hopeful that MH370 will be found."

While the battery in the underwater locator beacon was expired, experts pointed out that the instrument itself should have still functioned properly, recording all the flight information (that has yet to be found). Moreover, the report also found that the battery in the locator beacon of the cockpit voice recorder was fully functional, providing at least some hope of discovery. The report stressed that its purpose was not to point fingers or to further exacerbate an already sensitive situation, but simply to provide information and serve as a preventative measure in hopes of avoiding future incidents. "The sole objective of the investigation," the report read, "is the prevention of future accidents or incidents, and not for the purpose to apportion blame or liability."

Still, the pain of loss is as sharp as ever for passengers' loved ones, who remain desperate in their search for answers. In China, from where 153 of the 239 passengers hailed, a number of families gathered to pay their respects and offer remembrances. Cheng Liping, the wife of missing stuntman Ju Kun, told USA Today, "I came to pray for him, I've been here many times before. We have had no real information from Malaysia, but we will not give up." She carried a hand-drawn sign, reading, "I will never give up. There is no home without my husband. My two sons need their father to return home safely."

Official statements from the Malaysian government have ruled the disappearance of MH370 an accident, and have presumed all those aboard dead, but many remain vigilant in their quest for clarity. And government officials have honored requests to maintain the search, with Australian Prime Minister Tony Abbott pledging continued efforts in scouring the Indian Ocean. Said Abbott,

Chinese Foreign Minister Wang Yi has also promised the Chinese government's full support and cooperation in continued efforts on behalf of the passengers' families, saying Chinese officials would provide "all needed service to every next of kin" in order to protect their "legitimate and lawful rights and interests." At a news conference, Wang noted, "A year has passed, the plane has not been located, but the search effort will continue. Today must be a difficult day for the next of kin. Our hearts are with you."

Difficult, though, does not begin to describe the palpable heartbreak seen across nations on Sunday as family members came together to mourn and protest the continued ineffectiveness of the search efforts. Family member Grace Subathirai told Agence France-Presse, "My mother was on MH370. It has been a year so far. It has been a most painful year for many of us, a never-ending battle. My mother was my world, everything to me." Jacquita Gonzales, wife of the flight’s cabin crew supervisor, Patrick Gomes, told AFP, "The only answer I want is where is the plane, then only will we know. The whole world has heard what [Najib] has said, so they can’t go back on their word."