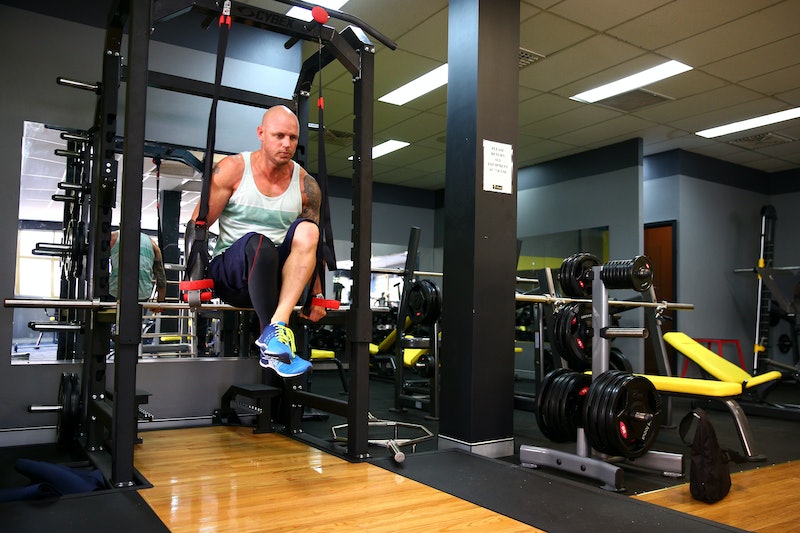 Promoting positive body image by way of exercise has long been the name of the game for gyms like Planet Fitness, but in a wonderfully progressive move, some establishments have taken feeling good about yourself to the next level. The locker room policy at Planet Fitness allows gym members to use facilities as per their self-reported gender identity, and when push came to shove in one Michigan location, the gym stood its ground in the best way possible. After a woman complained about the presence of a "man" in the female locker room and proceeded to tell "everyone in the locker room what happened," referring to her run-in with the trans individual, Planet Fitness promptly revoked her membership, citing the "inappropriate" manner in which she voiced her concerns as motivation for the gym's decision.

According to Yvette Cormier, the now former member of Planet Fitness, the saga began last Saturday when the 48-year-old walked into the locker room to find someone "dressed like a man." She told ABC News that the individual was wearing "a little bit of blush," but was "huge" and appeared "very manly." She continued, "I just stopped right there in my tracks. It was a man for sure." According to Cormier, when she raised concerns to gym employees, she was informed that "whatever gender you feel you are, that's the locker room you're allowed to go in." Clearly mortified by this progressive policy, Cormier told ABC News, "I stood back and said, 'How about he waits until I'm done in the women's locker room. Or get a unisex bathroom.' [The employee] asked if I would like to talk to the manager and I said, 'I'm calling corporate.'"

Unfortunately, this call to corporate did little to assuage Cormier's rather unfounded fears, as the national representative only confirmed the local employee's stance on the Planet Fitness policies — Director of Public Relations McCall Gosselin explains that the facilities are "committed to creating a non-intimidating, welcoming environment for our members. Our gender identity non-discrimination policy states that members and guests may use all gym facilities based on their sincere self-reported gender identity."

This, apparently, proved too much for Cormier to handle, as she told ABC News, "I wouldn't have signed up for this gym if I knew that ahead of time," seeing as Planet Fitness is clearly "failing to protect me if anything happens in those locker rooms with a man." But rather than leaving the gym, the disgruntled member instead decided to return to the premises and tell everyone who would listen of her tragic experience. A few days later, she received a call informing her that her membership had been revoked. "They said, 'You are talking to people about him in the women's locker room. You are making people upset.' That's my whole point," Cormier fumed. "I'm telling them and warning them because you are not doing that. You allow men in there, and we are appalled by it." It is unclear who "we" are, in this situation, as it seems that Cormier is one of the few, if not only, people who have raised concerns regarding this inclusive and accepting policy.

According to Gosselin, it was not so much the nature of Cormier's concern that got her kicked out of the gym, but rather the manner in which she went about addressing (or rather, attempting to address) the issue that caused great offense. Said the PR director, "The manner in which this member expressed her concerns about the policy exhibited behavior that management at the Midland club deemed inappropriate and disruptive to other members, which is a violation of the membership agreement and as a result her membership was canceled." Indeed, the sort of narrow-mindedness exhibited by Cormier only further illustrates the difficulties faced on a day-to-day basis by gender non-conforming and transgender individuals.

Carlotta Sklodowska, the woman who believes she is at the center of the controversy, told Michigan Live that Cormier is the first person who has raised issue with her presence in the gym locker room, but that living in the small community of Midland, Michigan, as a trans woman is still a difficult situation. "As far as I can tell, I am the only one in Midland," Sklodowska said. She also noted that while she does not find Midland to be particularly welcoming to transgender people, she does have "loads of friends around town" who support her.

LGBT advocates have lauded Planet Fitness' policy and its handling of the situation, and has noted that allowing trans individuals to use the locker rooms they feel align best with their own gender identity is key to ensuring their safety and privacy. "A transgender woman would be much more at risk for her safety if she had to use the men's bathroom," attorney Jay Kaplan with the ACLU of Michigan's LGBT Project told MLive.

While there is still much work to be done in terms of the advancement of trans rights in the United States and around the world, Planet Fitness and its locker room policy is a welcome step in the right direction.