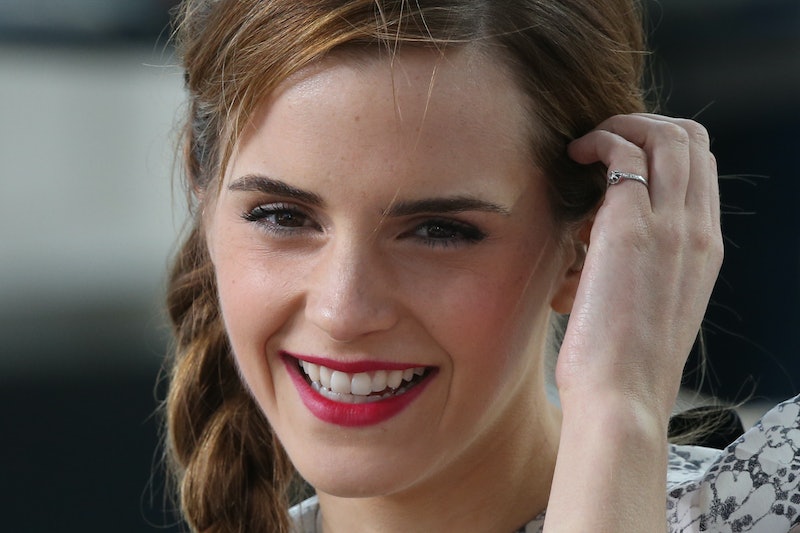 In a Facebook Q&A Sunday, Emma Watson spoke about the intersection of chivalry and feminism. "I love having the door open for me,” Watson said during a conversation about men's role in helping enforce gender equality. “I love being taken to dinner." She added, "But I think the key is, would you mind if I open the door for you?”

Watson's right: Chivalry and feminism are not mutually exclusive. I myself am a feminist. I believe in the social, economic and political equality of both (and every) genders, and I believe that in no way are women less capable than men. I believe that I, as a woman, should be entitled to the same salary, the same opportunity, the same education, the same access as men. And I believe that gender equality has yet to be fully recognized.

I actually took a man out for dinner and I chose the restaurant and I offered to pay. It was really awkward and uncomfortable – I’m just going to say that. It was not going down well!

Like Watson, I believe in chivalry. I love being taken out on dates — being bought a drink, a meal, or better still, dessert. I appreciate doors being held open, car doors being opened, and being asked to order first in a restaurant. That doesn't make me a hypocrite. And I'm tired of being told that it does.

I will be the first to admit that I am combative by nature. I am prone to arguments, I am opinionated, and I have no concerns with voicing my disagreements. But feminism is not combative in the same way. Feminism does not stand at odds with chivalry, with general human decency, with kindness. Believing in the advancement of women — in the equality of the sexes — is not a zero sum game. We do not have to lose to gain. We do not have to ask men to shut doors for us so that we can open them ourselves.

I grew up in Texas, where southern gentility reigned supreme and feminism was a label akin to a scarlet letter. Just last summer, when I asked my female friend, born and raised in Texas, if she was a feminist, she threw me a horrified glare before all but yelling, "Hell no." Her mother is the first female CFO of her company, she wants to be a lawyer, and is a brilliant woman of her own accord who undoubtedly believes that women are equal to men. But somewhere south of the Mason-Dixon line — and, if we're being honest, the world over – feminism became a bad word.

My best friend in New York City, a native New Yorker, on the other hand, suffers from a very different affliction. "I don't feel comfortable with a guy buying my drinks or waiting for me to get out of the elevator first," she once told me. Why? "Because I'm a feminist."

It is in the juxtaposition of these two attitudes that the true demons of connotation have aligned — for both my friends, feminism is, somehow, a crutch. Somehow, the power of a single word has made both women, for very different reasons, extremely uncomfortable with the way in which they interact with the world. For one, feminism and man-hate, unshaven armpits and other early 20th century stereotypes have coalesced into a single vision, and for the other, feminism has become synonymous with an almost supercilious, ostentatious need to prove a point. And somewhere along the way, I worry that we've lost sight of what that point is.

The supposed "tension" between chivalry and feminism was brought into sharpest relief when I left Texas for college in the northeast. For the first time, men didn't hold doors open, they didn't automatically offer to pick up the tab, and they didn't offer up their coat when it was less than, oh you know, a breezy 60 degrees. "You're a feminist, aren't you?" my friends (many of whom were men) would say when I pointed out my newly noted discrepancy between northern and southern tendencies. "Wouldn't you be offended if they did do those things?"

Native Texan, current New Yorker, and die-hard feminist, I can now say, with more confidence than ever, absolutely not. Feminism is not an excuse to be rude.

I don't believe for a second that being a feminist and wanting to be treated with respect and dignity means that I want to have my cake and eat it too. Because I don't expect you to open the door for me because I'm a woman, but because I'm a human being. And because I appreciate your paying for this date because you asked me out, and are making a decent gesture as one human being to another.

In 1995, Hillary Clinton famously noted that women's rights are human rights. And while I would not go so far as to equate feminism with humanism — because let's face it, we're still dealing with different issues here — the general sentiment is an incredibly important one to remember. My wanting to be treated equally doesn't mean that I expect you to be an asshole to me, mostly because I want to believe that you'd treat anyone in the world, regardless of gender, with the same courtesy.

The etymology of the word "chivalry" has become as lost and confused as "feminism," and perhaps this is why the two seem to be perpetually at odds with one another. But at its core, chivalry can be described as the intersection of ideal knightly qualities, including but not limited to courtesy, generosity, valor and of course, an ability to take up arms. While not all of these characteristics are as applicable today as they were in days of yore, these are the same basic principles that should guide all human behavior, regardless of gender.

Feminism is not meant to be a barrier to either gender. Rather, it is meant to establish a sense of mutual understanding and respect that will allow for the entirety of humanity to operate at its best. Inequality of the sexes is not only a woman's issue because it hurts men the world over as well. Our economy, our infrastructure, our very livelihoods suffer when men and women are not afforded the same opportunities. But feminism cannot place itself at odds with human decency and kindness. We, as women, cannot deny ourselves simple pleasures in life, citing gender equality as the problem. If anything, that simply reinforces the problem.

So be a feminist. And be a recipient of the not-dead principle of chivalry. It doesn't make you any less of an advocate for women.