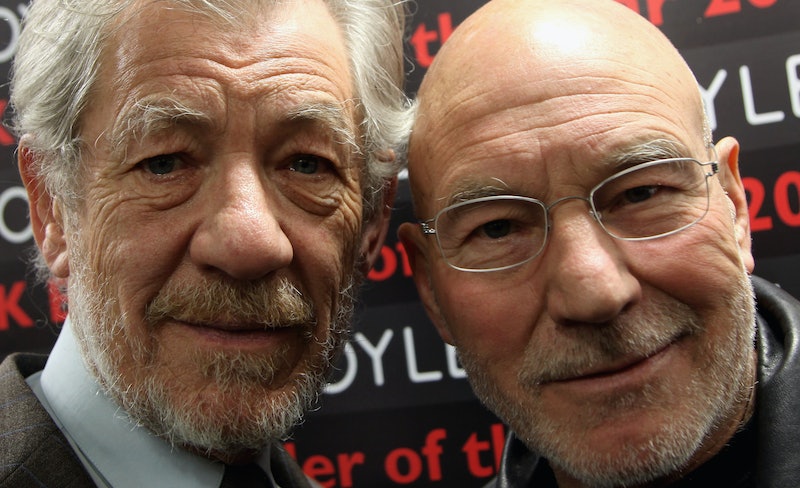 Ian McKellen and Patrick Stewart are really insanely great at being best friends. They're so good at it that watching this McKellen-Stewart interview on CBS evokes pretty much the same reactions as watching kitten videos, or hugging puppies. I'm not usually one to go in for old man interviews with the same zest as I do cat videos, but watching them laugh and shoulder-cuddle and compliment each other made me feel like I was watching an interview with me and my best friend, except if we were men and half a century older and had played Gandalf and Professor X I guess. It was amazing.

In fact, it made me think of all the things about being a best friend that these men probably have to teach us. After all, they've been going for similar roles in a competitive industry for decades, they are from opposing British counties (Battle of the Roses ain't no joke, even now) , they've played enemies and yet, they still love and respect the shit out of each other, just like proper best friends should.

They reflect what is most wonderful about a best friend, so here are some sage lessons of best friendship that Patrick Stewart and Ian McKellen have to teach us:

1) It's totally ok to cry. Ian told the cutest story about weeping when Waiting for Godot, a play both men starred in, came to a close because he didn't want it to end. How sickeningly sweet is that? We've all felt that way, that we don't want a vacation or a visit or an evening to end because here we are, hanging with our bestie and it just feels perfect. So cry guys, it's alright, if Gandalf/Magneto can do it, so can you.

2) Go for the old lady proprietary arm grasp. Watch the interview and notice Ian McKellen employing a professional old lady arm grasp when he is mildly talking shit about Patrick Stewart's hometown. It says, "I am blatantly making fun of you, but this physical contact shows I care." This move is so seriously effective, you might just avoid 50 percent of apologies in your friendship. Just like Patrick Stewart and Ian McKellen do. Because they're perfect.

3) It's normal to feel as though you and your best friend are the same. Seriously, if you, me, and Ian McKellen have all felt this way, it must be acceptable. As best friends do, Ian McKellen couldn't make it through an interview without casually complimenting his best friend and fellow thespian's skill and future endeavors, and while doing so, he said that they're pretty much the same actor. It's cute because they totally aren't, but it shows how willing Ian is to attach his star power to that of his friends' to promote a project Patrick Stewart wanted to make happen.