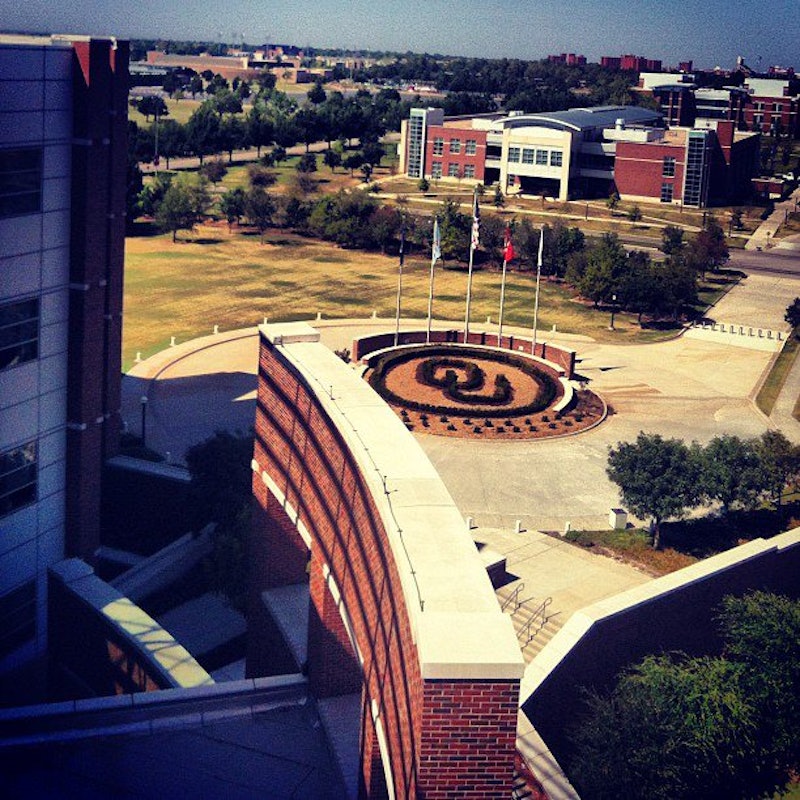 A fraternity at the University of Oklahoma has been shut down over a racist video that reportedly shows white male students denigrating African-Americans. The Oklahoma chapter of Sigma Alpha Epsilon was suspended by the fraternity's national organization on Sunday shortly after the video surfaced online. University of Oklahoma administrators are investigating the incident.

In the video, a group of white male students on what appears to be a chartered bus are singing and clapping along to a racist song that includes a racial slur and makes an allusion to the lynching of African-American men. The students sing:

It's unclear where the video was first posted, but the University of Oklahoma's black student alliance, Unheard, uploaded a 10-second clip of the video on the group's Twitter timeline on Sunday. The group tagged university President David Boren in the tweet.

Boren responded promptly, tweeting that "this behavior ... is contrary to all our values" at the University of Oklahoma. A few hours later, Boren posted an updated statement to the university community, writing:

I have been informed of the video, which shows students engaging in a racist chant. We are investigating to determine if the video involved OU students. If OU students are involved, this behavior will not be tolerated and will be addressed quickly. If the reports are true the chapter will no longer remain on campus.

The video quickly triggered the hashtags #SAEHatesMe and #NeverBeAN*****InSAE on Sunday night. Unheard is also planning to hold an anti-racism demonstration on the University of Oklahoma campus Monday morning. Student organizers encouraged all participants to wear black in a show of solidarity.

The members of SAE were reportedly removed from the chapter's on-campus house late on Sunday after the national SAE organization was made aware of the video. Boren also released a statement Monday morning requesting SAE members to vacate their house by midnight on Tuesday.

The national SAE organization released a statement Sunday saying all students of the Oklahoma chapter have been suspended. Members who were directly involved with the racist video will have their member privileges permanently revoked, SAE said.

"This is absolutely not who we are," the statement added. "Any behavior that is not aligned with the conduct we expect is unacceptable."

I was not only shocked and disappointed but disgusted by the outright display of racism displayed in the video. ... When we learned about this incident, I called an immediate board meeting, and we determined with no mental reservation whatsoever that this chapter needed to be closed immediately. I am proud of my fellow board members because we mean what we say.

The University of Oklahoma Sigma Alpha Epsilon chapter was founded in 1909 and has more than 150 members, according to university stats. Its members are predominantly white.

Although SAE was already closed down by Monday morning, Boren told students gathered on campus that the university has officially cut all ties with the fraternity. In an updated message to the university community, he called the SAE members in the video "disgraceful" and don't deserve to call themselves "Sooners," the University of Oklahoma nickname.

Student activists continued to organize on Monday at the University of Oklahoma to reform the culture at the storied Midwestern university. Boren has so far been attending the rallies and supporting the student activists for rallying for change.