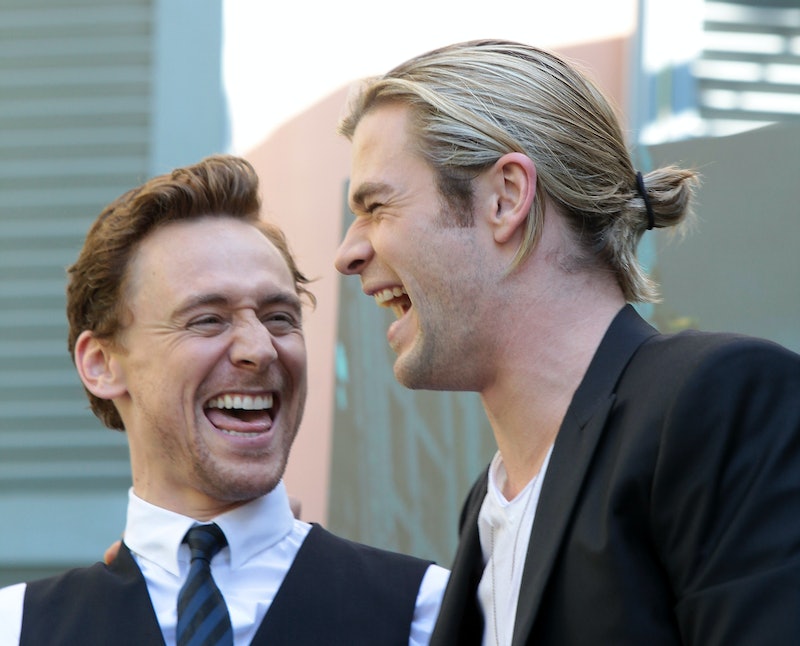 On Saturday, Chris Hemsworth hosted Saturday Night Live — and, more importantly, he also joined the Twitter-sphere. There was no one more excited about these accomplishments than his onscreen brother. Tom Hiddleston sent Chris Hemsworth a flattering message on Twitter, and reminded fans that, while they play bitter enemies on screen, the two actors actually always have each other's backs. Ever since the pair met in 2009 to film Thor, Hemsworth and Hiddleston have been best buddies. "We came into this, at the same point in our careers, with the same enthusiasm and love for these types of films, and just had a great time doing it," Hemsworth told Collider at the time. "You either have chemistry with someone or you don’t and, thankfully, it was there."

Hiddleston wholeheartedly agreed. "It’s quite literally a bromance," he told Collider of his co-star. "The fact that we get along, we just egg each other on. We raised each other’s game. We just had a really, really good time." From that point on, and through all the other Marvel films, they've remained close friends. But even more than that, Hemsworth and Hiddleston are each other's biggest champions. Here are 14 times they supported each other through thick and thin.

When Hiddleston Tweeted to Hemsworth

Seeing Hemsworth join Twitter and also host SNL must have been a big moment for his dear friend. He could hardly contain his fanboy-status when posting this tweet.

When Hemsworth Was Hiddleston's #1 Fan

Hemsworth is a proud Hiddlestoner.

When Hiddleston Was In Awe of Hemsworth's Body

Abs on abs for days.

And Hemsworth Wasn't Having Any of Hiddleston's Modesty

Hemsworth will let no one disparage Hiddleston, not even Hiddleston himself.

When They Loved Each Other's Heroes

Aw, look how much they love each other.

When Hiddleston Thanked His On-Screen Brother

When he won the MTV Movie Award for best villain, he paid tribute to the man who helped his character soar.

When Hiddleston Didn't Even Care That He Got Punched

It's very Mean Girls of him.

Never a dull moment when these two are together.

When Hemsworth Was Hiddleston's Cheerleader

They may be enemies in the movies, but, in real life, there's nothing but support between these two.

When Hiddles Held His Jacket So Hemsworth Could Go Show Off

When it was Hemsworth's turn at bat for the strength test, he shed his blazer and handed it to Hiddleston — who didn't skip a beat in holding it while his co-star took the stage to display his muscles.

And When Hemsworth Did the Same Thing

The friends that gush together, stay together.