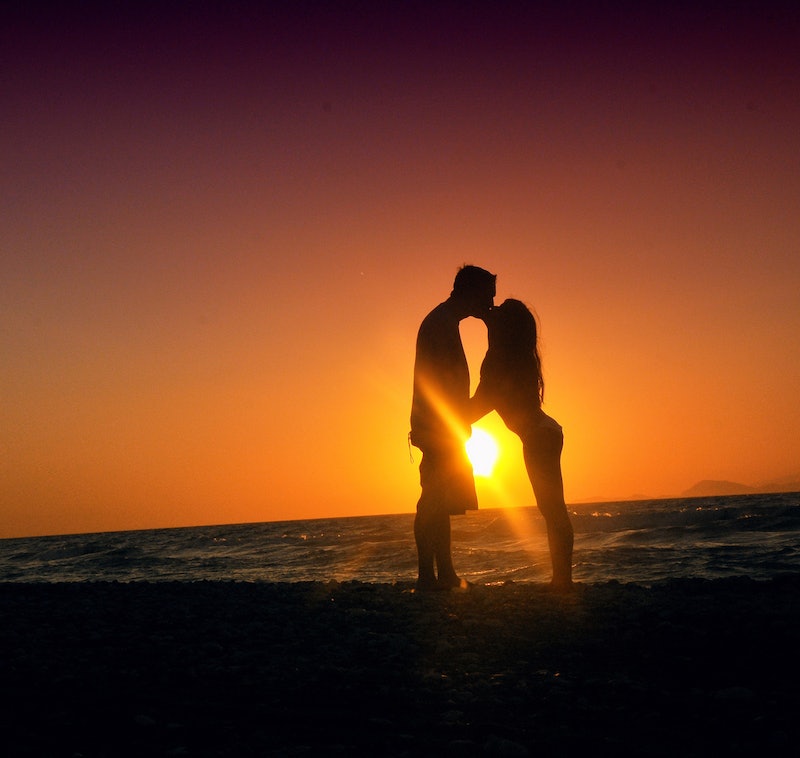 Dating is sometimes great, sometimes the worst. Temporary relationships are how we learn about ourselves, but they're also how we sometimes find ourselves home alone on a Saturday night, mascara tears running rivulets down our cheeks, drinking straight from the wine bottle and social media stalking is cousin's boyfriend's ex-trainer's mom' neighbor. (Yes, I'm aware of how many awful stereotypes I just employed, and it was for fun effect, not because that's what happens to everyone who dares enter to tumultuous world of dating; Not all of us are fragile flowers waiting to fall apart. But we all are sometimes.) There are a lot of people in the world we're incompatible with, and unfortunately, there also seems to be no short supply of total jerk-faces. But it's all worth it, because eventually (hopefully) we meet the "right" one.

The Right One, just so we're all on the same page, is the one you can't imagine any future without. The one who you'll happily weather long distances with, the one whose best interests you will have at heart and who will always bring a smile to your face when they work through the door (obviously, these things go both ways with the right person). They are the one you will work at your relationship with, the one who will be by your side even when everything is the worst between you, because sometimes it will be. When you finally meet this person, you'll realize a few things about relationships.

1. That you really did put up with a lot of crap

When the right person is in your life, you'll look back at everyone that came before, and they'll turn into one great big blob of crap you put up with but that you really shouldn't have had to. Obviously relationships are full of compromises, but when the right one is is your life, you'll see that the way you used to bend with other people, or the way you let other people treat you, was less than what you deserve in a relationship.

2. That the right person is so much better than just any old person

Being with the right person will make you realize that you don't need to be in a relationship for the sake of being in one, although it's probably too late for this lesson considering you're hoping you'll never have to be with another person again. The right person is the one you can do everything or nothing with, be yourself around, and whose company you never (okay, maybe sometimes, but very rarely) tire of (although it's not so much tiring of it as needing a moment to yourself). The right person is right unconditionally, whereas any old person might just be for fair weather.

3. That friendship is more important than romance

With the right one, you'll have romance, sure, but you'll have friendship first. You'll be able to sacrifice the idea of every encounter being grand and decadent in favor of laughing at each others farts, because being friends with your lover is one of the most rewarding relationships you'll ever have, far more than any candlelit dinner.

4. That "reliable" and "trustworthy" are more important traits than you thought

When you're dating, you probably go for looks first. That's nothing to be ashamed of: When you're at a bar or party, that's all you really have to go off at first! And when you're young, things like smarts and style matter, but when you meet the right one, you'll begin to value different traits, like reliability and trustworthiness, over any other more "exciting" trait. Someone who makes you laugh and who answers when you call will be far more important than their ability to look amazing in jeans.

5. That so much drama is not really worth it

So much of the drama you've endured or caused will seem like it wasn't worth it. And when you have drama with the right one, that will seem even less worth it in the aftermath. Dramatics become something you want to avoid in relationships, and honest communication, no matter how much more difficult, becomes your priority.

6. That all you really ever needed was someone to match your crazy

It's my belief that everyone is crazy. When you hear people talking about someone they dated and calling them "crazy", it's true. That person was crazy. But so is the person talking about them. "Normal" is not a thing that actually exists. Everyone has ideas and problems and issues and illnesses and everyone feels pain and joy in a unique way. And yeah, that makes everyone seem crazy to everyone else. When you find the right one, you'll realize that the point isn't to look for someone normal: It's to find someone who is the same brand of crazy as you.