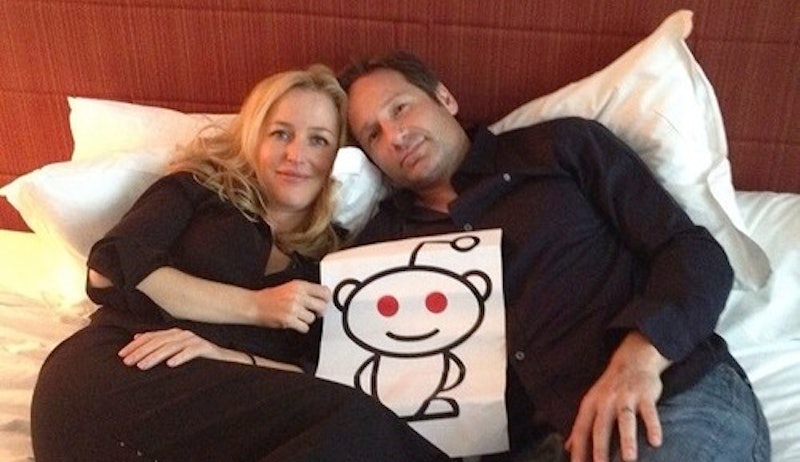 While you're on your X-Files high due to the fact that Mulder and Scully reunited at New York Comic-Con today, here's one more thing to extend it: Over the weekend, Gillian Anderson and David Duchovny got together for an exclusive Reddit AMA, in which they talked about everything from David Duchovny in red speedos, masturbation, Scully's ill-fated dog Queequeg (may he rest in peace, the poor thing), and some hopefully-totally-real-but-super-secret lap dances that went on in Duchovny's trailer during production of the series. It was all adorable, and it just makes the fact that Gillian Anderson hasn't yet guest-starred on David Duchovny's Showtime series, Californication, all the more ridiculous. Come on, guys! Make this happen.

You can check out some choice samples below. Don't worry, I've included the question about lap dances, as well as a question about what the two of them would do if they were able to switch bodies for a day — and, of course, the question about David Duchovny in that now-infamous red speedo from the pilot of The X-Files.

For the entire thing (which you should definitely read because it's hilarious), head over to the Reddit thread here.