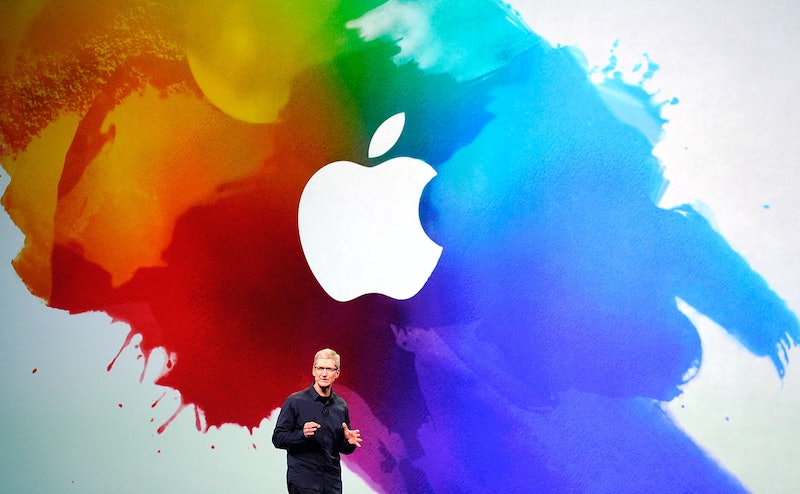 2:19 p.m. - There is literally no reason to carry a wallet anymore, because besides acting as cash, credit and debit, the Apple Watch can be your hotel room key.

2:11 p.m. - You can operate Siri on your Apple Watch just using your voice.

2:03 p.m. - We are watching a video of Christy Turlington Burns running a half-marathon in Kilimanjaro while wearing an Apple Watch. Burns talks about how the distance of a half-marathon is the same distance some mothers in the area need to travel to get obstetric care, a cause she is passionate about. "In the short time I've been using it, I can already tell [the Apple Watch] is going to be a big part of my life," she says.

2:01 p.m. - The new Workout app "allows you to do things like running and cycling," things you couldn't do before the release of the Apple Watch.

1:57 p.m. - You can have Mickey tell time on your Apple Watch. Cook is very excited about this. And perhaps most importantly, "you can receive calls on your watch! I've been wanting to do this since I was five years old!" Cook says. "The day is finally here!"

1:54 p.m. - We are finally talking about the Apple Watch, the latest addition to "the family" (Cook's words, not mine). In this image, it looks like the baby of a family of skeletons.

1:45 p.m. - Apparently there is now going to be a new industry standard USB port, called USB-C. On the new MacBook, this is the only port — and you can plug everything into it you want, though Apple would rather you used AirDrop and Bluetooth to connect your devices.

1:42 p.m. - Schiller is talking about a lot of very technical stuff. What I'm getting out of this: lots of words that sound like science fiction, and the new MacBook will not have a fan to regulate its temperature. And it will have all day battery life!

1:37 p.m. - Long, intimate shots of a very skinny laptop with sexy music in the background. Cook walks out holding a tiny laptop like it's a baby, or Simba. "Can you even see it?" he asks the audience. "I can't even feel it!" Weird thing to say about a baby. Bill Schiller says it is "the most extreme and efficient notebook we have ever created," and the invention of this new MacBook took "reinventing" everything the engineers knew about MacBooks.

The new MacBook is the lightest and the thinnest ever — at only 2 pounds, and 24% thinner than the old ("old?") MacBook Air.

The new skinny computer has a special new skinny keyboard, which even uses a new mechanism — a "butterfly" rather than a "scissor." It even sounds prettier and lighter!

New apps will address problems like Parkinson's disease, heart problems, and breast cancer. And your medical data will all be safe — you decide what you share, and Apple will not see it. ResearchKit will be added over time, first released next month, and it will be open-source. The audience cheers to hear it will be open-source — good news for coders.

1:16 p.m. - Cook announces that every major car brand is now going to be workable with CarPlay. I've never heard of CarPlay? Apparently it was only released a year ago, so maybe that's why. What brands are "major"? Questions abound.

1:15 p.m.- Coca-Cola is going to have 100,000 vending machines that accept Apple Pay by the end of the year. No more using real money, forget that burden! Your iPhone can now perform the functions of literally everything, including money.

1:13 p.m. - "Apple TV has become the category leader," Cook says, citing how cheap the price is — and he's lowering it from $99 to $69 to make it more accessible to more people! This feels like Oprah!

1:10 p.m. - Plepler shows a dramatic new trailer for Game of Thrones. I don't watch the show, but the pretty blonde woman said, "I'm a queen, not a butcher." Very dramatic.

1:02 p.m. - It begins! The live stream of March's Apple event takes off with a video of the opening day of the latest Apple store in West Lake (Hangzhou), China. Everyone is really excited, cheering and screaming and hugging strangers. This is how Apple makes them feel. From the song in the background, we hear, "The sun is coming up." Very inspiring.

Apparently Apple has a "very aggressive" plan to have a total of 40 Apple stores in China. Over the last six weeks, Cook says, they have opened six new stores, leading to a total of 21 in the country — and 453 in the world! Whoa.

Cook gets right to the point, discussing how much Apple loves HBO, one of the many channels available on Apple TV. "We love HBO," he says, citing Sex and the City, Veep, and Game of Thrones as his favorite shows. He introduces the CEO of HBO, Richard Plepler, to give us some "exciting news."

"We are thrilled to be here this morning to announce our standalone streaming service, HBONow, and we couldn't be prouder that Apple is our exclusive partner at launch," Plepler says.

Subscribing to HBONow gives you access to all HBO programming past, present, and future — all you need is a cable connection and an Apple device! For $14.99 a month. If you subscribe when it's first available in early April, you get the first month free. Not bad for a first announcement.