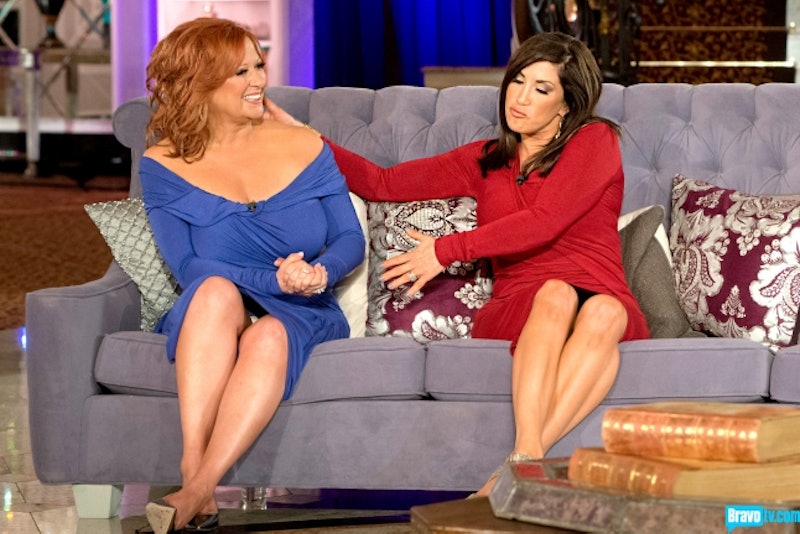 Last night, the red-headed matriarch of The Real Housewives of New Jersey fame (infamy?) took to Twitter and Bravotv.com to confirm that she, Caroline Manzo, will not be around for Season 6. I don't blame her. Season 5 gave my stomach ulcers ulcers. There is only so much Teresa Giudice versus Joe Gorga drama a non-cyborg can handle. However, Caroline is far from done with reality television: she, her family, and Bravo started production on the spinoff Manzo'd With Children. Puns are my oxygen, so I'll let the name slide.

Initially, I adored Caroline. She was brassy and unapologetic, and I love a lady who keeps it real. However, she suddenly found/positioned herself as the resident "everything expert" of the cast, and that's fun for zero people. I'm somewhat apprehensive to work Manzo'd into my future TV schedule for a number of reasons. Granted, I'm getting ahead of myself (the network has yet to order the series), but I know what I don't want from the show:

So what do I want the show to be? My ultimate RHONJ spinoff: Caroline's sister Fran starts a petting zoo in the Manzos' backyard. It would be called Fran & Franimals and be sponsored by Danimals. You can have that one, Bravo.