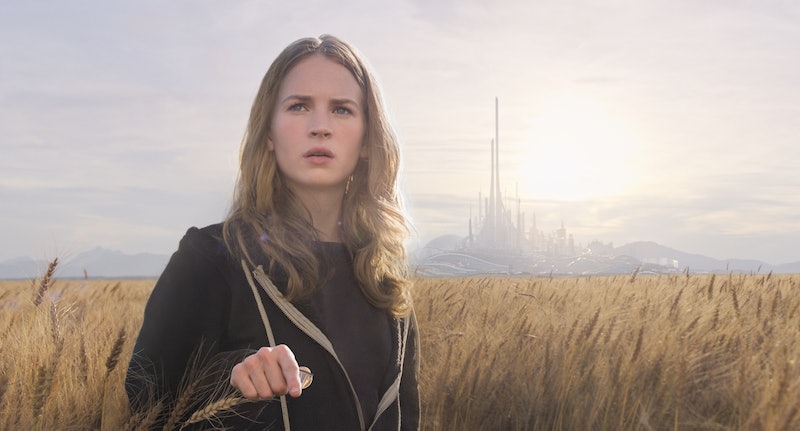 Walking out of the theater after seeing Jupiter Ascending , I was struck my multiple things — namely, that this movie was just as frothy and ridiculous as people had said it would be, but that I wanted the elements at its center to take over our theaters in mass hordes. Because Jupiter Ascending had, at its core, what Disney's Tomorrowland promises. Because though the film does not so far have quite the ridiculous rep that the space opera does, it does have its most important element: It's one of those rare girl calls-to-action, with a female hero and her rise to adventure making the whole thing go 'round. It's that Hunger Games thing, and it's still way too rare in our blockbusters.

This trailer shows us the most we've seen of the film so far, finally giving us more to go off of besides George Clooney's Dumbledorian voice-over and a futuristic cityscape. More of the film's elements are unfurling, and it's clear that they're classic ones. In fact, they seem like straight-up Joseph Campbell hero's journey elements — think Harry Potter, think Star Wars, think Frodo Baggins. The elements of these stories have graced our screens over and over (and over and over) again for as long as we've had screens — and before that pages, and before the scrolls, slabs of rock, word of mouth, you name it. But in the grand scheme of things, seeing a young girl take that call to action is still relatively rare in our blockbuster world.

Tomorrowland is hardly revolutionary, but it is certainly a nice thing to see Britt Robertson's Casey Newton take on the hero mantle and be our guide through this new world. There are still many steps left to take — getting girl call-to-action stories onscreen that don't always center on white people, cis people, etc. — but I for one am glad for this moment. The hero's journey is classic for a reason, after all: It's provided us with some of our most memorable legends. I can't wait to see where Casey Newton's goes.