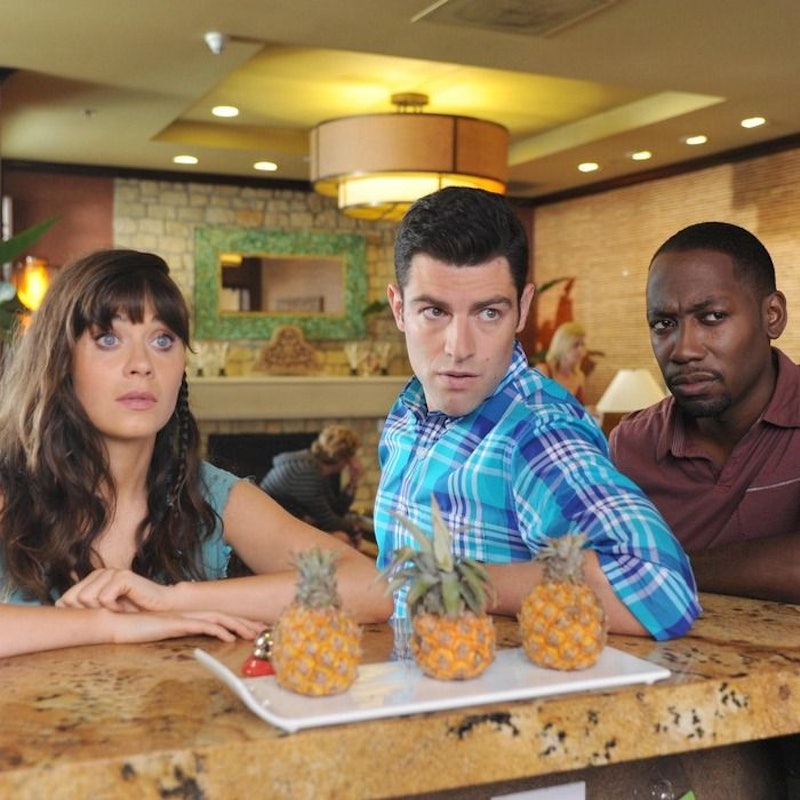 It has recently been speculated that New Girl breakout star and TV’s sexiest grump, Jake Johnson, could be part of Jurassic World , Steven Speilberg’s fourth installment of the Jurassic Park series. Though Johnson is best known for his zombie-(half) novel-writing and sleuth-in-training bartender Nick Miller, this new project could mean major studio success for the actor. We can only hope that if cast, they will do as they did with Jeff Goldblum and require that he wear leather pants at all times on a tropical island.

To get Johnson fans assimilated to the idea , we’re taking New Girl to the Jurassic period. Here are our picks for the cast of New Girl imagined as the dinosaurs from Jurassic Park.

Nick Miller as the Triceratops

All this triceratops wants to do is take a nap because his damn tummy hurts and he doesn’t have health insurance. Or maybe it just played True American way too hard last night with the other herbivores. He probably also prefers drinks that say, “I work in a hole.” But right now he’s just feeling, “I'm not okay! I woke up today, and I wanted to play a friendly game of touch football, then I hurt my back, and I went to your gynecologist, and now I might have cancer!”

Jessica Day as the Baby Velociraptor

Adorable? Yes. Big Eyes? Naturally. Seemingly helpless? MAYBE. But oh, does this baby know how to bite. This baby raptor will lure you in with charm and then lay some serious smack, "If any of you cross me, I'm gonna kick the testicles clean off your bodies! Clean off! You'll look like Ken dolls down there!" LIke Muldoon warned, raptors travel in packs and are exceedingly loyal to their kind (don’t mess with the loft). Everyone say it together: Clever Girl.

Schmidt at the Dilophosaurus

Clearly the sassiest and most peacock-y of the Jurrasic Park lot, the dilophosaurus is the Schmidt of the gang. He also had to put $20 in the douchebag jar for spraying his toxic mist at the rest of the loft for using his dinosaur bath towel and uttering the phrase “Bishop in a turtleneck." In fact, the real reason the dilophosaurus attacked Dennis was because he wasn’t wearing driving moccasins. He’s also meddling, ever so meddling.

Winston as the Gallimimus

Seriously, HOW DOES THE GALLIMIMUS NOT GET MORE SCREEN TIME? I mean COME ON. The Gallimimus is clearly as talented as the rest of the dinosaurs. In fact, I would say it’s one of the most riveting scenes in Jurassic Park! They also have a bit of a complex about their athleticism. Clearly they’re fast, but not fast enough for any real glory. Sigh. Perhaps their time is coming in Jurassic World (or the rest of this season as Schmidt becomes less and less endearing).

Cece as the Brachiosaurus

Tall like a model and probably doesn’t eat meat (Cece is also Hindu), the Brachiosaurus is definitely the Cece of the gang. Oh, it’s also ONE OF THE MOST BORING DINOSAURS in all of Jurassic Park. And much like Cece, the brachiousaurus will just sneeze in the face of your bad jokes.