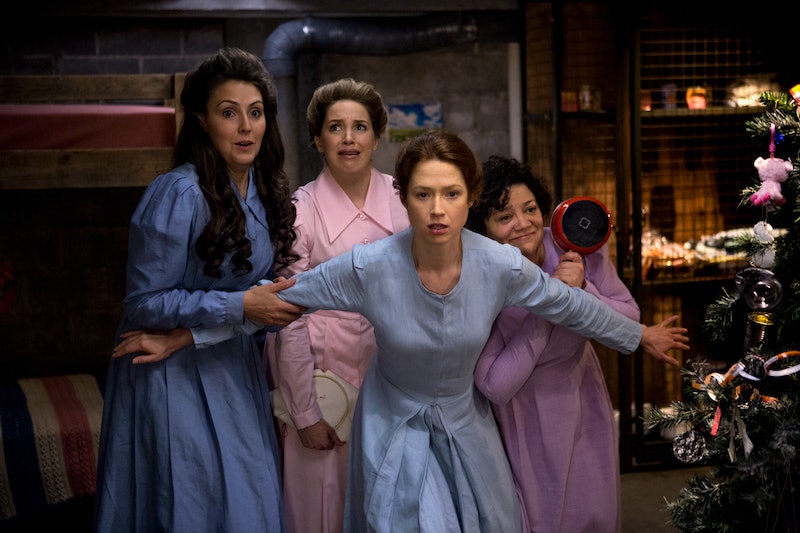 After binge-watching Netflix's new sitcom The Unbreakable Kimmy Schmidt, you might have a few questions about Kimmy's living arrangement before being rescued by the FBI. In the first few moments of the show, Kimmy Schmidt and her apocalyptic "sisters" are rescued from a Doomsday bunker that was created by Reverend Richard Wayne Gary Wayne (aka Jon Hamm). As far as Kimmy and the other women were concerned, the world ended at Y2K, and they were the only surviving humans. Spoiler alert: They're not. It was all an absurd kidnapping plan by Reverend RWGW, but the idea of living underground in a bunker like Kimmy Schmidt is real (though still rather absurd).

With a few "threats" of an upcoming Doomsday in the past fifteen years, some people have taken extra precaution to secure their stay on this Earth if anything big happens above ground. Kimmy Schmidt takes place in 2015, but the women have been underground since 2000. There, they've had their fair share of canned foods and shifts rotating the "mystery crank" that we later learn generated power to the unknown Reverend RWGW side of the bunker (he's got a wide screen TV and loves The Apprentice). Even though the Reverend knew that the world didn't end (he made trips outside), there are some people that have come to terms that they'll need to move underground if the End of Days were to happen.

Some of these people are religious organizations (in many cases, cults). Around the time that the Mayan Calendar was coming to a close, the world was supposed to also come to a close, at least according to some believers. One cult in China, known as the "Almighty God," spread rumors that the world was nearing an apocalypse in Dec. 2012 (12-21-12 to be exact). This group went door-to-door spreading the word, but obviously, we're still standing. Unless this is all some sort of Matrix-esque dream world. Nah.

A more specific example of a man who represents an idealization and plan most similar to Reverend RWGW in Unbreakable Kimmy Schmidt is Peter Larson, of Utah. Peter Larson, a Mormon, believes the End of Days is near, which is why he dropped $65,000 on an underground bunker for his family when Doomsday eventually comes about.

Larson's bunker is full of supplies, weapons, and an air filter crank that highly resembles that of Reverend RWGW. Larson says he needs about 24-hours notice from God for when Doomsday is going to happen so he can get to the mountains and inside his bunker. That seems highly needy to me, but the guy dropped a lot of cash on this place, so we'll let him have it.

Not all underground bunkers are built in a religious mindset. One man was found living in a self-made bunker in Buffalo, New York, after living there for six years. His bunker was more for living and not survival like Larson's.

If Larson's bunker doesn't fit your fly fancy lifestyle, there are luxury Doomsday bunkers available. There is one "luxury survival bunker" that contains 10 combined residences, hotel rooms, grocery store (which I have to say is going to run out of stock eventually), medical and dental offices, a dog park, a shooting range (because you got to practice shooting when you're the last people on Earth), a movie theater, and a pool. Because if it's the apocalypse, you should at least go out in style.