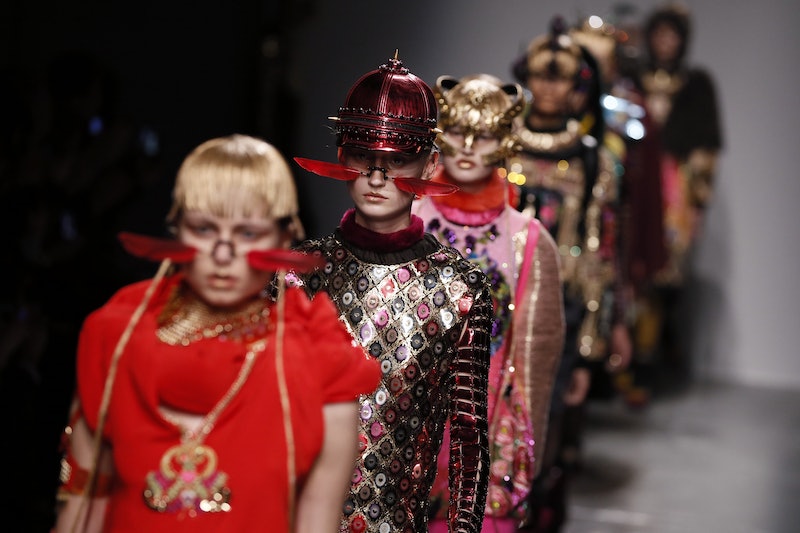 For every subtly alluring look on the Paris Fashion Week runway, there are a handful of unabashedly ostentatious experiments which are designed to place the viewer in a state of deep contemplation. These challenging looks aren't confined to clothing; in fact, makeup is an arena where many designers let their imaginations run wild, even if their collection is otherwise prim and classic.

There is a precedent for experimental makeup at Fashion Week, after all; from the maximalist nearly-noir lips at Nanette Lepore's Fall 2015 presentation to Marc Jacob's makeup-free minimalism for Spring 2015, idiosyncrasy is the name of the game when it comes to cosmetic design at Fashion Week.

Paris Fall 2015 Fashion Week has been no different, as designers have chosen to lean heavily on unorthodox techniques and unconventional styles that are just begging for interpretation. Instead of emphasizing glowing skin, makeup artists highlighted under eye shadows; an abundance of piercings has usurped the single stud in each ear; and in place of a pop of blush, one intrepid designer chose to scrawl a face instead.

When bold and courageous cosmetics looks such as these hit the runway, the message is not to take them to the streets or into the workplace. Instead, it is best to absorb each outlandish look, make your conclusions, and let the images take their place amongst the annals of fashion history. Read on for four Paris Fashion Week cosmetics looks that may be better left on the runway.

Women's Wear Daily's review of Manish Arora's Fall 2015 collection suggests the designer took direction from Game Of Thrones, but the broken arrow nose adornment seems to draw more from a tribal perspective. Unless your notion of fashion includes playing Russian Roulette with cultural conventions you're not well-versed in, perhaps it's best to leave the adornment on the runway.

In a moment of makeup genius that won't soon be forgotten, Jacquemus sent his models down the runway with faces painted on their cheeks. As incredibly artistic and daring as the look may be, our culture isn't ready for employees stepping into the office sporting doodles scrawled across their faces.

One of the most understated of Paris's most daring makeup looks, Guy Laroche's punk-inspired metallic eye shadow is also the exact opposite of what anyone sporting dark circles should attempt. Etched into the inner corner and lids of the eyes, Adam Andrascik for Laroche's smokey silver shadow gave the illusion that models hadn't slept for weeks. Lesson learned: pewter shadow on the inner corners of the eyes is not a good look for the haggard.

Though the multitude of piercings and twirled handlebar mustaches was a thought-provoking choice at Givenchy — and one which caused Style.com to draw parallels to FKA Twigs — the trend should be approached with the utmost care; piercings aren't just a temporary beauty experiment to be removed at the end of the day with a makeup wipe, so think before you dive in headfirst.

More like this
Dua Lipa On YSL Beauty, Plus Her Fearless Approach To Hair & Makeup
By Erin Stovall
12 Party Makeup Looks That Are Perfect For The Holidays
By Jessica Willingham and Olivia Rose Ferreiro
The 12 Trendiest Nail Polish Colors To Wear In 2023
By Olivia Rose Ferreiro
8 Nail Art Trends That Will Be Everywhere In 2023
By Jordan Murray
Get Even More From Bustle — Sign Up For The Newsletter