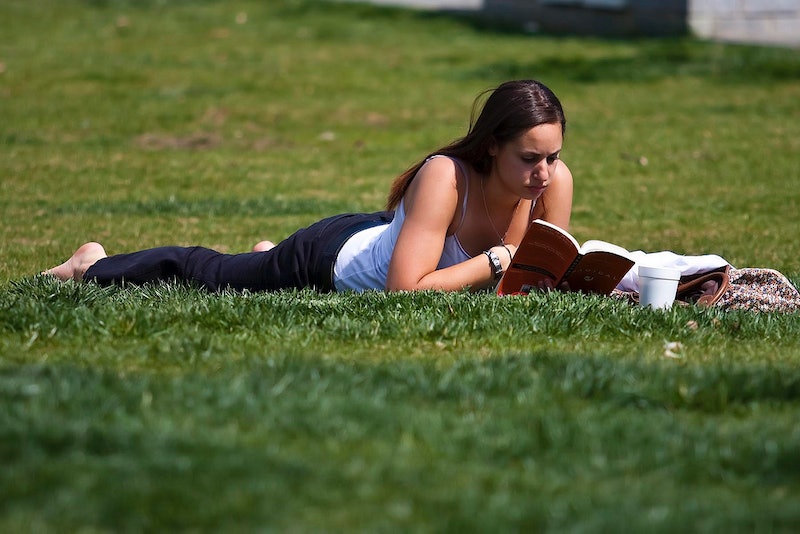 The book, and even the simple act of reading, sometimes seems under threat of extinction. After a study in 2006 revealed that people "reading" text on the Internet only actually read about 20 percent of the content — (they skimmed the content in an F-shape, looking at the beginning of each line and then checking for important words) — it's been yelled from the rooftops: Reading is over! We've forgotten how to do it! Tablets are killing our ability to digest text! All books will soon be recycled into packaging for our new iWatches! But science remains resolute, pointing out the many different ways in which reading still influences our lives — and our brains. And there are many: from stress reduction to brain evolution to memory and empathy, reading is a pretty powerful tool. Careful where you point that novel.

We absorb text in huge amounts every day, and are only gradually discovering just how much its packaging affects how we understand it. Studies have shown, amongst other things, that red text makes us read and understand far slower (it makes us anxious), and that being exposed to fast food logos quickens our reading speed. Everything from font to placement on the page affects us. It's not just a one-way transmission of information from page to brain; instead, we're perpetually negotiating and shifting in how we react and what we retain.

Rest assured that reading is still a profoundly simple (and, it turns out, calming) act. Here's a list of just seven of the amazing things that science has figured out about reading and the brain.

Turns out that your library is great for your mental health. In 2009, the University of Sussex did a study that showed that half an hour of dedicated reading is better for your stress levels than several other more traditional methods of relaxation, like having a cup of tea or listening to music. It reduced stress levels by up to 68 percent, which is pretty significant.

Scientists think the reason is partially escapism, partially physical focus: complete immersion in a book means the body is less focussed on its own tense muscles, and relaxes.

2. You don't read more slowly on paper than you do on a screen — but you might remember more.

Before 1992, studies seemed to show that books were on the way out: readers looked as if they were comprehending text more slowly on a physical page than they did on a screen. Since then, however, studies have been a bit more diverse — largely because we've got so much more text and so many more types of screens — and scientists aren't sure that's actually the case.

Dr. Maryanne Wolf, in her bestselling book Proust And The Squid , has a theory: the invention of reading, several thousands of years ago, prompted our brains to evolve, allowing us to assimilate information differently. Reading, for Wolf, is one of the crucial elements in human genetic and intellectual history, and has a pretty huge role to play in how we think, work, record, and remember.

The theory is still debated — but either way,Stanislas Dehaene, in Reading In The Brain, points out how completely ridiculous it is that our brains, which first existed simply to survive on an African savannah, can now happily comprehend Shakespeare.

4. We actually react physically to metaphors in books.

This one's pretty awesome: A study by Emory University revealed that metaphors are actually more physical than we think they are — at least the ones about texture. They compared peoples' MRI scans when they heard metaphors that used texture ("She had a rough day" was the example they gave), to when they heard the same statement without a metaphor ("She had a bad day").

The results? On hearing the texture metaphor, the part of the brain that activates when we actually touch something lit up. We're genuinely feeling the metaphors we read.

Reading fiction — immersing yourself in the life of another and seeing the world through their eyes — has always anecdotally been good for broadening one's outlook. But now there's hard science to say it actually makes us more empathetic.

To be fair, the study (done, again, at Emory, who are doing a lot of work on books and their interaction with the brain) focussed entirely on the kind of fiction that's explicitly about character, from Anna Karenina to the steam-of-consciousness modernists like Virginia Woolf. But the results were pretty unequivocal: after reading them, subjects were more empathetic and emotionally intelligent, able to "feel" the movements of the characters in the movement areas of their own brains.

6. Reading intricate characters prompts the brain to 'write' them.

The brain has numerous ways of interpreting and remembering letter symbols; it develops a symbolic language to help it. But one of the most fascinating ways in which it copes happens when it's reading something particularly complicated and unfamiliar, like kanji or calligraphy. It turns out that the brain actually "writes" the letter; the part of the brain associated with physically making text lights up, as if it's physically moving a pen over the lines of the symbol.

Poetry, it turns out, stimulates our brains in much the same way that music does: it links to the right half of the brain, which regulates emotion. It's also prone to send us into a self-reflective, memory-boosting state, particularly when reading well-known poems we love. Poetry also lights up the areas of the brain that concern memory and switch on when we're relaxing. Call it the "poetry trance."