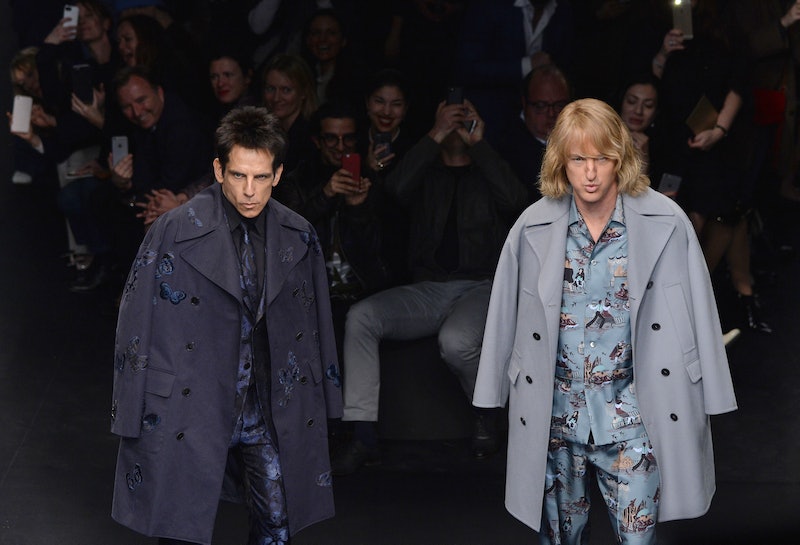 If you're as fanatically obsessed as I am with the early '00s classic Zoolander, you've probably heard the rumors that a sequel to the film is supposedly in the works. So far, all talk of a Zoolander 2 has been speculation — until now that is. Brace yourselves for this, people. Ben Stiller and Owen Wilson appeared in Valentino's show at Paris Fashion Week to tease the upcoming film, and their surprise stunt was pure genius.

The really really ridiculously good-looking duo reunited on the runway for the first time since the 2001 modeling comedy as their reprised characters, Derek Zoolander and Hansel, respectively. Blue-steeling their way down the couture runway, Stiller and Owens sported hair and makeup looks that were identical to their signature Zoolander styles. Owens rocked beachy blonde waves with bangs, while Stiller brought back those boy band-esque, spiked strands that his titular Derek Zoolander was so infamous for.

As you might imagine, the affair included all the glorious smoldering and lip-pouting you'd expect from the movie's stars. As the ever-noble Mugatu would say "It's that damn Hansel! He's so hot right now!"

Pretty much sums up my reaction to the epic walk-off between the hysterical Han-Solo and Boo-Lander.

Which superstar pulled off the original duck-lipped model gaze better?

That's a close one, but it's safe to say that the runway hijack was the best possible way to share this news with those of us going through Hansel & Derek withdrawal — and it blew our freaking minds.

More like this
23 Times Meghan Markle Dressed Just Like Princess Diana
By Bustle UK
The Secret To Taylor Swift’s Fringe, According To The Experts
By Orla Pentelow
Bella Hadid Just Wore Y2K-Inspired Pacifier Earrings
By Natalia Perez-Gonzalez
Alicia Silverstone Has Recreated An Iconic 'Clueless' Scene
By Frances Stewart
Get Even More From Bustle — Sign Up For The Newsletter