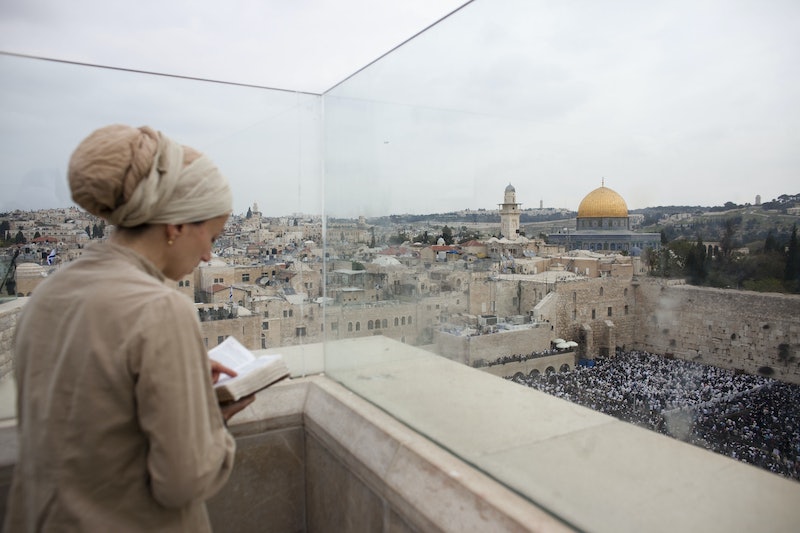 Earlier this month, over 500 people gathered at the Ramaz School on Manhattan’s Upper East Side to witness a milestone in Jewish history: the inauguration of the first class of maharat. Maharat is a Hebrew acronym for a phrase that means a female leader of Jewish law, spirituality, and Torah. The three women given the blessing will be the first Orthodox women to serve as clergy. In all but name, they are rabbis. Or so we've heard.

Bustle asked four people from very different parts of the Jewish world to explain just what this milestone means, and why Orthodox women still can't serve as rabbis. Ruth Balinsky Friedman, 28, is one of the recent Yeshivat Maharat graduates; Chaim Shmuel Kaye, 28, is starting the process of becoming a Reform rabbi this year; Sydni Adler, 22, will start her Conservative rabbinical training next fall; and David Levin-Kruss, 48, is an Orthodox rabbi and teacher at the Pardes Institute of Jewish Studies in Jerusalem.

What was your first reaction to hearing that women were going to be ordained as maharat?

Chaim Shmuel: To be honest, I had a very selfish reaction, which is to say I was worried that if Orthodoxy is willing to confirm women in the role of a rabbi, then in a very central way the the uniqueness of liberal Judaism's plurality and egalitarianism might be less defining. So I was both simultaneously very excited and enthused about it being a fantastic move forward for Orthodoxy, and wondering “what does that mean for the rest of us?”

Sydni: I was very excited. One of the reasons why I am choosing not to be ordained within Orthodoxy is its current lack of positions of respect for Orthodox women. I believe that this is a step towards the right direction, but we're definitely not there yet.

What do you think has happened recently in the Jewish world, or the world at large, to make this milestone possible?

Ruth: We see ourselves as an outgrowth of all the movements before us to educate the community, and slowly over the past century women's learning has increased to the point that many of us have had equal access to the texts that men have.

Chaim Shmuel: I don’t understand why this didn’t happen earlier. I certainly don’t think it's because suddenly women have more of a capacity to be rabbis and that that’s a recent thing. I think it demonstrates a change in the thought process of certain influential Orthodox rabbis for the better, and I’m very pleased with that. And I hope that people continue to move in those thought circles.

What arguments have you heard for why there shouldn’t be female rabbis? Do you agree with any of them?

Sydni: Orthodoxy seems very attached to keeping the separation between men's and women's roles. I don't quite understand, but maybe it has something to do with that. What I hear from those men who do disapprove is a kind of separation between their Judaism and mine. I am a "liberal" Jew and they are "Torah" Jews. With Maharats, though, Orthodoxy must now react to female figures acting as rabbis within their own sphere of Judaism.

David: The main reason is a question of halakha [religious Jewish law], which says a woman is not allowed to be in a position of power over men. Many rabbis say this law is no longer relevant because that isn't the type of power that rabbis have nowadays. Another argument against [women being rabbis] is that inevitably a rabbi does certain things—acts as a witness or leads a minyan [a gathering of men praying] or things like that—which women in Orthodoxy can’t do.

Does there seem to be something significantly different to you between someone being given called a 'rabbi' versus 'maharat'?

Sydni: A maharat is not placed on the same hierarchical level as a rabbi. We've been listening to the opinions of rabbis for almost two thousand years—but not so much from maharats. I believe it's sort of an issue of power, and I think it's ridiculous.

Ruth: I’m happy with the title of maharat and I think it’s very exciting. I don’t see [the title of] rabbi as being higher because the two are functionally the same. As far as their roles in synagogue, there is no difference except that maharat do not participate in a minyan or serve as a witness to marriage ceremonies.

David: It’s not just the female form of rabbi, it is significantly different.

Do you think you can be an Orthodox rabbi and be a feminist?

Sydni: Yes! In my opinion, there are many halakhot [religious Jewish laws] that reduce the rights of Orthodox Jewish women that aren't really halakhot at all. They arise from minhag [social customs without the authority of law]. I believe that the responsibility of feminist Orthodox rabbis is to reinterpret current customs of halakha to reflect either what the rabbis originally said, or what their original intentions were in these sorts of cases. I believe that these women have a right to enter into the conversations of current and future rabbis, and to introduce feminist, feminine voices into the ongoing reconstruction of Jewish law.

Ruth: I strongly identify as a feminist and almost everyone I know is a feminist. I don’t see the two as being mutually exclusive. But I prefer to learn in an all-women’s space, and there are certain conversations we can have that are very specific to the female experience.

Chaim Shmuel: I just don’t know. But I think the fact that people are playing with halakha to move it towards equality for women says a lot about the future of open Orthodoxy, and I think it’s a bright future.

More like this
How To Fight For Reproductive Rights, Based On How Much Time You Have
By Courtney Young
The Music Industry Continues To Fail Black Women
By Precious Adesina
Sandra Bullock, Girlboss Extraordinaire
By Matt Harkins & Viviana Olen
Lydia Leonard Is Setting The Record Straight
By Olivia-Anne Cleary
Get Even More From Bustle — Sign Up For The Newsletter