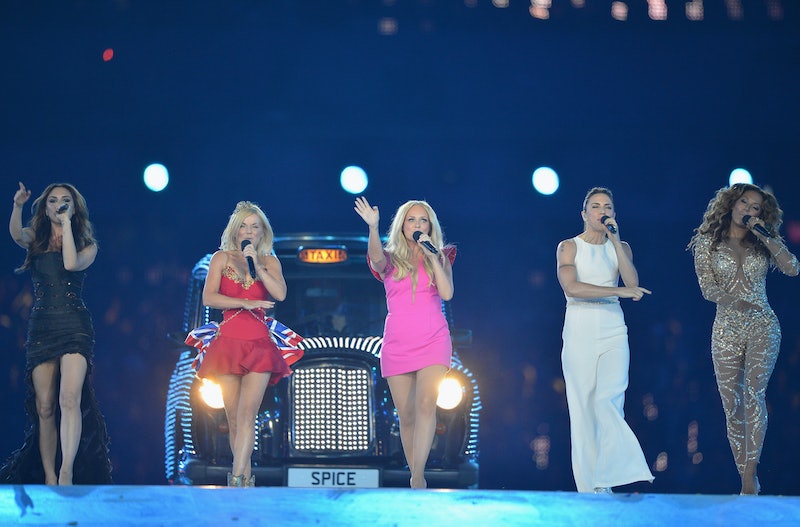 For those who pay attention to detail and the technical and business-y side of pop music, it may come as a surprise to know that the Spice Girls were not always called Posh, Ginger, Baby, Scary, and Sporty. According to the history books, the Spice Girls could've gone in a lot of different directions, what with the original group being sans Emma Bunton, and the original manager being sans originality. (Seriously: He wanted these five to dress the same and sing cover songs.) Luckily for everyone involved, though, the Spice Girls emerged from the ashes of past decisions, and Posh, Ginger, Baby, Scary, and Sporty were ushered into the hearts and minds of anyone alive in the 1990s. And Mel B. (a.k.a. Scary) recently spoke about how the Spice Girls got their now-iconic nicknames, giving credit where credit was due (and/or forgotten on the part of the media):

It was actually a teeny bopper magazine called Top of the Pops who gave us our names. We were already established as the Spice Girls, but they wrote a story about us and within it they called us each something different. The names stuck, so we went with it!

So, yeah, some might claim that the Spice Girls technically got their nicknames in 1996 from Top of the Pops editor Peter Loraine, but blah blah blah business, marketing: We're already asleep. Boring! How were the nicknames chosen? Said Loraine:

I simply said it would be a good idea if they had some nicknames. The girls liked the idea, so I had an editorial meeting back at the office and about four of us started thinking of names. Posh was the first one to be thought up because Victoria looks pretty sophisticated. The rest were pretty easy really because the girls' characters were already really strong. The names jumped out at us. We laughed the most when we came up with Scary. Jennifer Cawthron, who was also from Leeds, came up with that one because Mel B was so loud and had tried to take over our whole photo shoot. We ran the names for a couple of issues and the first time the girls saw them they thought it was funny. Then the newspapers started picking up on the names and they cropped up everywhere until they were fully accepted by everyone.

So, apparently, these girls' nicknames were prescribed for them, but they were inspired by the people who came before said names. Personalities! Physical qualities! You know.

But in every nickname there's a stem of truth (or so I've decided just right now). And, really, we're not getting the whole story here. We can't be. Loraine's version is far too boring and obvious. The true, true story* is much clearer and much more interesting. For example, did you know that...

See? There's more truth behind nicknames than you think!

* and by true we mean completely made up because of course it was.