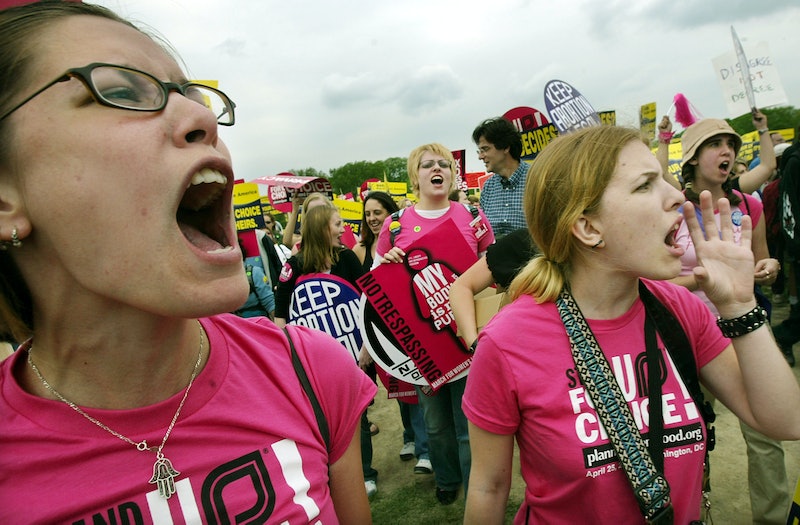 When you Google "abortion clinic," you should be able to find a website that promises to help you deal with the crisis of an unplanned pregnancy — and you might be directed to a Crisis Pregnancy Center to do that. But is a Crisis Pregnancy Center (CPC) and an abortion clinic the same thing? The answer is no — in fact, the sole goal of a CPC, often run by pro-life Christians and other religious groups, is to prevent a woman from getting an abortion.

NARAL Pro-Choice America, a non-profit dedicated to expanding a women’s access to abortion, released a report Monday that blasted these fake abortion clinics as an “insidious threat to reproductive freedom.” According to NARAL, the number of CPCs have exploded in the country and greatly outnumber abortion clinics — 2,460 to 438. These locations have become the battleground for the pro-life/pro-choice war, and advocates of a woman’s right to choose are losing.

NARAL President Ilyse Hogue said in a statement that CPCs can't help women make the best decision for themselves, because they don't give women the right to choose.

Crisis pregnancy centers offer the exact opposite of that. These institutions are driven by a desire to limit women's options and to do whatever it takes to keep all women from choosing abortion. They lie, they scare, they humiliate.

Most CPCs belong to three non-profit networks: Care Net, Heartbeat International, and Birthright International. These centers often are intentionally set up to look like legitimate doctors' offices filled with treatment rooms and ultrasound machines. CPCs employ plenty of tactics, such as giving misleading information about the health risks that come with abortions, that target women who are thinking of terminating their pregnancy.

Many will take on neutral-sounding names to sound like real health care centers. In California, anti-abortion center names include “Alternatives Pregnancy Care Clinic” and “Options for Women.”

One way CPCs snag unsuspecting women is simply through proximity. They’ll set up shop near legitimate clinics or in medical buildings that house health care services. EMC Frontline Pregnancy Centers’ 12 New York locations are “next door to or are down the block from other abortion clinics,” a fact stated on its website that specifically names Planned Parenthood as a neighbor. California, along with Texas, tops the list for having the most CPCs in the nation with 167 locations, according to NARAL.

Solution: Avoid window-shopping clinics. Always make an appointment by phone first. Follow through by visiting the correct center. Be aware that a CPC could be right next door.

CPCs use billboards and online ads to reach pregnant women. NARAL found that centers will often buy ad campaigns on keywords such as “abortion” and “women’s health clinics” to pop up in online searches when women look for information on abortions. NARAL discovered that Care Net and Heartbeat International spend more than $18,000 per month on these pay-per-click campaigns.

Solution: NARAL successfully fought to remove misleading ads from major search engines in 2014, The Washington Post reported. Two-thirds of those ads were wiped from Google, according to NARAL. But always click with caution.

Some CPCs promise limited medical services such as free pregnancy tests, ultrasounds, and sonograms to make them appear as if they’re real health care providers. These centers even hire people with medical training or simply put staffers in white lab coats, NARAL said. But most CPCs aren’t medically licensed and will instead offer counseling and brochures.

Solution: Use your gut. Information that sounds overly biased against abortions, scary, or downright deceitful is usually a good tipping point that you’re in a CPC. If you get the sense you’re being lied to or if someone is overly aggressive about you staying, then leave. There will be another day.

Limitations on abortions vary state by state. The number of states that have laws supporting CPCs? Twenty-three, according to NARAL. Texas state law requires that women, in order to know all her options, must have a sonogram before choosing to have an abortion. The Lone Star State provides an online directory of places where women can obtain free sonograms, a list that includes CPCs. Some states also use taxpayers money to fund CPCs. A NPR story said nearly two dozen states sell “Choose Life” license plates whose revenue go directly to these centers.

To get an undercover look at how CPCs work, check out this great mini-documentary from VICE:

More like this
The UK Abortion Laws In 2022, Explained
By Sophie McEvoy
5 Ways To Stand In Solidarity With Women In America From The UK
By Sophie McEvoy
How To Fight For Reproductive Rights, Based On How Much Time You Have
By Courtney Young
16 Novels That Paint A Realistic Portrait Of Abortion
By K.W. Colyard
Get Even More From Bustle — Sign Up For The Newsletter