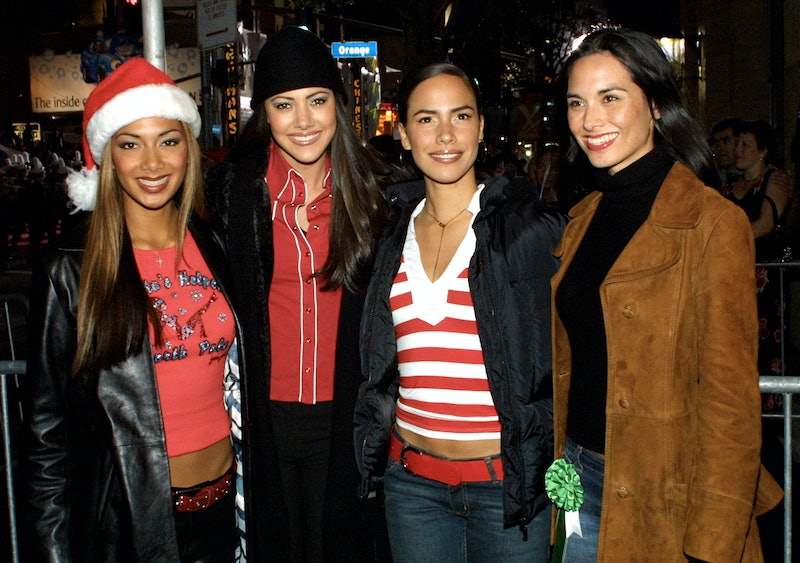 Let's all pour one out for Eden's Crush, the ultimate forgotten girl band of the early aughts. We watched the group form on the 2001 Making The Band-style show Popstars. We saw them dance around in butterfly tops in the "Get Over Yourself" music video. Ultimately, we watched every single one of them (aside from Nicole Scherzinger) fade into obscurity without a trace. What happened to Eden's Crush, anyway? Did they just succumb to early aughts one-hit-wonder syndrome?

At the turn of the millennium, everything was in place for pop star super stardom for this group of showbiz hopefuls. Popstars assembled Nicole Scherzinger, Rosanna Tavarez, Ivette Sosa, Anna Maria Lombo, and Maile Misajon into a five-pronged bubblegum pop group at the height of the modern girl group era. Their debut single "Get Over Yourself" made it to number eigh on the Billboard 100. Following the success of their first single, the group appeared on a handful of dates for *NSYNC's Pop Odyssey Tour and Jessica Simpson's DreamChaser Tour.

But in 2003 when their record company London-Sire records folded, the group disbanded. It seemed that just as quickly as they had risen to fame, people forgot about them. Well, we’ll always have the memories of this song.

Ah, the early aughts. Just for old time's sakes, let's check up on the gals from Eden's Crush to see what they've been up to.

As you may very well know, Nicole Scherzinger's career as a girl band frontwoman began here with Eden's Crush. She went on to become the only one of the Pussycat Dolls who actually sang, had a short-lived solo career, became a judge on The X Factor. In her most recent showbiz gig, Scherzinger played Grizabella in the London West End production of Cats . She was just nominated for an Olivier Award for Best Actress in a Supporting Role.

My best guess is that she doesn't keep in touch with the other girls, having said in a 2007 interview that she felt ostracized by her bandmates. "I was the one nobody liked and there was nothing I could do to stop that. Maybe it was because I was the pretty one." SO humble.

Tavarez parlayed her brief period as a girl group member into a brief career as a television personality. Around 2004-05, Tavarez appeared on Ryan Seacrest: Live and hosted a handful of TV Guide specials alongside Kelly Clarkson and Justin Guarini. According to her Twitter bio, she spends her time as a yoga teacher/ choreographer/ dancer. Check out a dance that was probably choreographed by her below. It's an interpretive piece that utilizes her former pop star abilities, and it starts at about 1:30.

Lombo has undergone a bit of an image makeover since her days of low-riding leather pants and glittery crop tops. According to Last FM, Lombo now performs multi-lingual versions of popular songs under the name Annie Trousseau. If you can get over the visuals in the above video, she actually has a pretty good groove.

In Misajon's Twitter bio, she describes herself as a "Writer of songs & stories, Singer, Momma, Wifey, lover of life, former girl band member." OK, so that's pretty comprehensive. It looks like she has continued writing music. In 2011, she released the following song called "More Than I Already Do."

She's also pretty diligent Instagram documenter. Judging from the copious amount of pictures of children she posts, we can glean that she spends a lot of time with her kids.

Remember the one with all the amazing curly hair? She teaches kids to dance now! According to her website bio, Sosa spent the years following Eden's Crush's breakup acting on stage and screen. The last credit on her IMDb page is an episode of Even Stevens in 2003. At the moment, Sosa is listed as an instructor at a dance studio called Across The Floor in Woodbridge, NJ. Welp, it sounds like a noble endeavor.