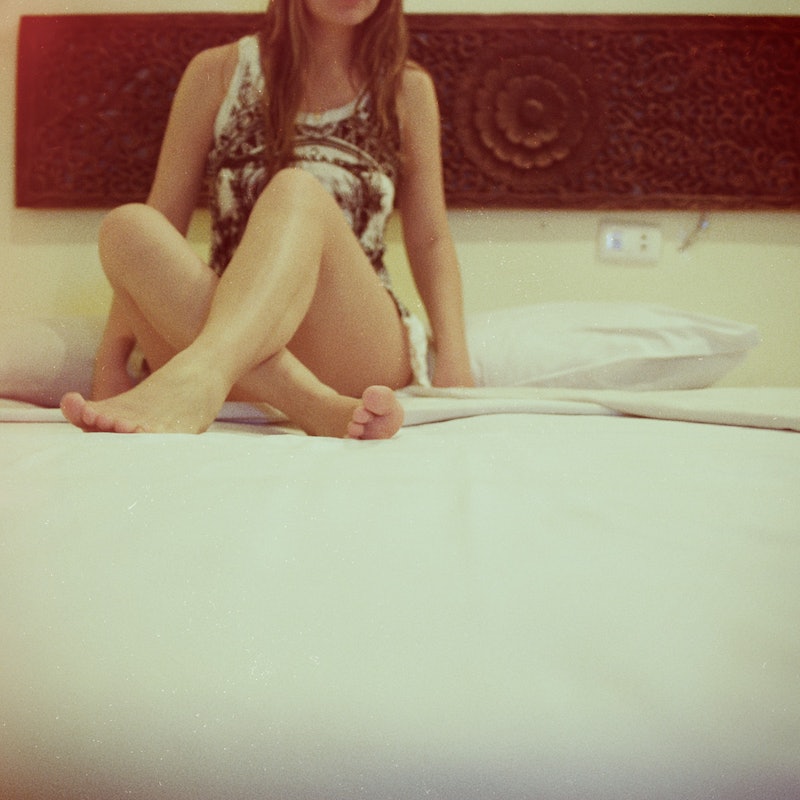 We at Bustle love giving you tips for how to tap into your sexual potential and troubleshoot when things aren’t going your way in the bedroom. But what about finding solutions to those stressful sexual health situations that inevitably crop up when you’re getting down? Emma Kaywin, a Brooklyn-based sexual health writer and activist, is here to calm your nerves and answer your questions. This week’s topic: what you need to know about candida, the culprit behind thrush and yeast infections.

Q: I’m embarrassed to say this, but I get yeast infections a lot. Like .... a lot a lot. I guess I’m just out of balance. I often don’t even tell my boyfriend when I’m dealing with one because I’m taking care of it and I don’t really think it’s any of his business (and I’d be telling him like every month). But lately I’ve been thinking, can I give a yeast infection to him? How can I be ensuring that we’re both healthy? How do I know we aren't giving it back and forth to each other?

A: First of all, don’t be embarrassed about getting yeast infections. It’s a totally normal, albeit totally annoying, side effect of owning a vagina. In fact, it’s extremely prevalent — around three quarters of humans with vaginas are diagnosed with a vaginal yeast infection at least once in their lives, and between five and eight percent get them way more frequently. However, vaginas aren’t the only body part that can be affected by candida, which is the name of the fungus that causes yeast infections and many other types of fungal infection. Here’s what you need to know.

There are a number of reasons why you may be out of balance, leading to a party of uninvited candida all up in your system. If you eat a lot of refined carbs, sugar, or alcohol, you’re basically eating candida’s favorite food. Some oral contraceptives can promote overgrowth. Stress can throw your whole body out of whack. Finally, antibiotics can kill the good bacteria that keep your body in balance, allowing the candida to grow unchecked.

In order to understand how to cure it in yourself and make sure you don’t pass it on to your partner or partners (which unfortunately can happen), you first have to know where to look for it.

Candida is a type of yeast that lives in your body in small amounts. This is totally natural and normal — your body has a bunch of stuff living in it, and if those fungi and bacteria are kept in optimal balance, they are a huge part of what keeps you healthy. However, a number of things can throw your candida levels out of whack, leading to candida overgrowth (cue ominous music).

Candida All Up In Your Vagina

If you experience a candida overgrowth in your genital area, it’s commonly known as a yeast infection. If you have an itchy vulva and vagina, soreness or redness, pain during sex, or irregular discharge often described as “cottage cheese-like,” (because apparently all vaginal discharge descriptions should remind you distressingly of something you once wanted to eat but now never will again), you may have a case of overgrown candida in your netherbits.

Candida All Up In Your Mouth

Candida All Up In Your Gut

Many researchers link candida to Leaky Gut Syndrome, which is basically just what it sounds like. This syndrome occurs when your intestinal walls get inflamed and weak, leading to holes in your intestinal walls. If these walls get big enough, food particles that should have stayed in your intestines can jailbreak into your bloodstream. Since this food isn’t supposed to be there, it will get attacked by your immune system, making you feel bloated, gassy, crampy, sensitive to certain foods, or even pain.

How does candida make all of these bad-feeling things happen? Well, it’s thought that if you experience a candida overgrowth, the fungal cells get all up in your intestinal lining. This causes the inflammation and permeation of the intestinal walls that can let food particles into places they don’t belong.

Candida All Up On A Penis

While humans with penises don’t get nearly as many yeast infections as those with vaginas, it definitely happens. It’s more likely to occur in people who are uncircumcised, and is characterized by a red rash, itching, or burning on the tip of the penis.

One study found that candida was pretty prevalent in a sample of both homosexual and heterosexual owners of cocks who showed up to an STD clinic, with 16 percent testing positive for candida of the penis. Now, remember that these are people coming into a clinic because they don’t feel great in their special parts, so it’s higher than the average population — but these numbers are still pretty significant! The study also found that candida-related penis swelling was more likely to occur in people who had put their penis into a vagina than an anus … but we’re getting ahead of ourselves.

Candida All Up In Your Anus

Can I Pass It To My Partner and Vice Versa?

It’s important to note that sexual transmission of candida from any of these places (mouth, penis, vagina, anus) isn’t all that common. However, it can happen, so it’s good to know about. Additionally, the research shows that sexual transmission is more likely to be what’s happening in cases of recurrent infection, so if you’re someone who gets a yeast infection often, take note.

If you treat your yeast infection only for another to pop right on up, it may be because your partner has one too, and just reinfected you. Since candida can be sexually transmitted, it’s a good idea for both people in a sexual equation to be thinking about not only getting tested if they feel symptoms, but also about maintaining their own health. Because if one of you has candida overgrowth, neither of you can truly be well.

How Can I Get Rid of It?

If you have a candida overgrowth, don’t fret — it’s relatively easy to kick. Thrush is generally treated with a course of antifungal medicine, so if your mouth is feeling not great, call your doctor. There are over-the-counter remedies for vaginal yeast infections, like over-the-counter creams or suppositories, and home remedies including yogurt and garlic, apple cider vinegar, or boric acid suppositories that you put up your vagina.

You can also ask your doctor for a one-day antibiotic like Diflucan (or as I call it, the magic pill). If you’re one of the humans who get recurring yeast infections, you can look into taking probiotics, which are a pill form of the healthy bacteria that can get you rebalanced and ready to live your life! Or you can just eat a ton of unsweetened yogurt, since these healthy bacteria are found there too.

The human body is not a single entity but actually a bunch of living things all up in each other’s business, in a delicate balance ready to be kicked out of whack at any moment. Candida overgrowth is one instance of what it can feel like to be unbalanced.

Getting yourself back in balance is important to maintaining your personal health, but since candida can be transmitted while you’re making the beast with two backs (or whatever positions you like), it’s equally important to support the health of your partner or partners. So the next time you are looking into your partner’s eyes with love, consider taking him or her out for a date … to eat some yogurt.