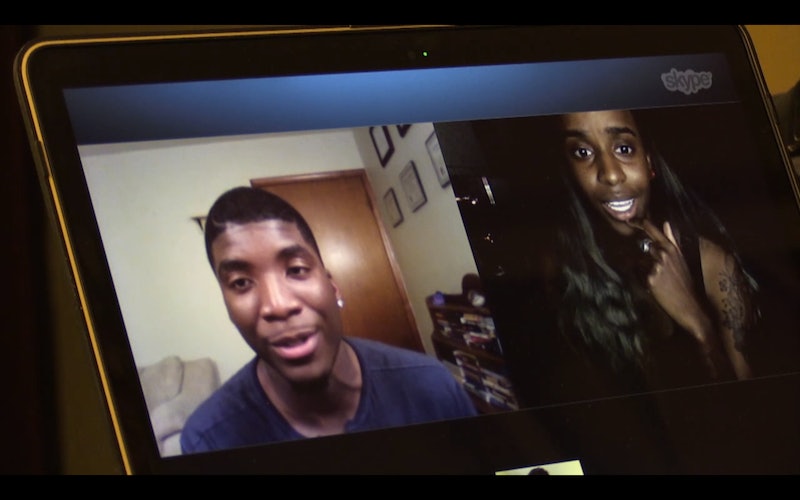 This week, the couple on Catfish's latest Season 4 episode actually doesn't seem to need the help of Nev and guest host Angel Haze. A couple of high school online pals who dated on and off, Harold & Armani are on Catfish because they finally want to meet up now that Harold has graduated and gone on to college. He says he wants to figure out this relationship once and for all before he either decides to date around or commit to giving the relationship a solid chance. They've exchanged tons of texts and messages and said "I love you" with emojis, but have never met up or even Skyped — major red flags that point at this being a classic Catfish false identity.

But these two have another connection, and it makes this story a little more interesting. One of Harold's high school teammates supposedly used to date Armani while they were all freshmen. Now, something tells me that during Nev's investigations, we'll probably end up finding out that friend never actually met Armani in the flesh either, but that does point at the real woman being somewhat close to their Illinois town, or maybe even another classmate that they both knew. And Harold says that they both loved basketball and bonded over their shared appreciation of the game.

Hey, if this turns out to be a real wacky episode, maybe his teammate was Armani all along, and tricked Harold into believing he dated her first all in order to mess with him. But MTV hasn't given us that many clues in their uncharacteristically short preview video for this week, which spends more time introducing Angel Haze than it does on Armani and Harold's relationship. Watch the preview below.

There's nothing keeping these two away from one another besides the barrier of never having met in person. They live a little far apart, but it's only a four-hour drive across Illinois, which compared to the distances that some Catfish couples have between them, isn't very much. But if you've ever wondered whether or not Catfish is real, Harold is ready to stoke your curiosity.

Harold's Twitter and Facebook profiles are still activated, and it looks like he hasn't stopped interacting with his friends online just because he's on a show about online trickery. But while he did retweet MTV's ad promoting the episode, he's been saying some VERY bold things on Twitter about the show — basically, that it's fake.

A disappointed friend was looking for hope, wanting to believe in MTV, but he wasn't having any of it:

Now, I've been skeptical of whether or not Catfish was real before, but I don't know if I believe that Harold is being totally honest about this. To me, this sounds like the self-defensive cop-out of someone who was really embarrassed about who tricked them online. Maybe it's a grandma, maybe it's a former basketball teammate, maybe it's a squirrel — but whatever it is, Harold doesn't seem to want us to think that it could ever happen to him.