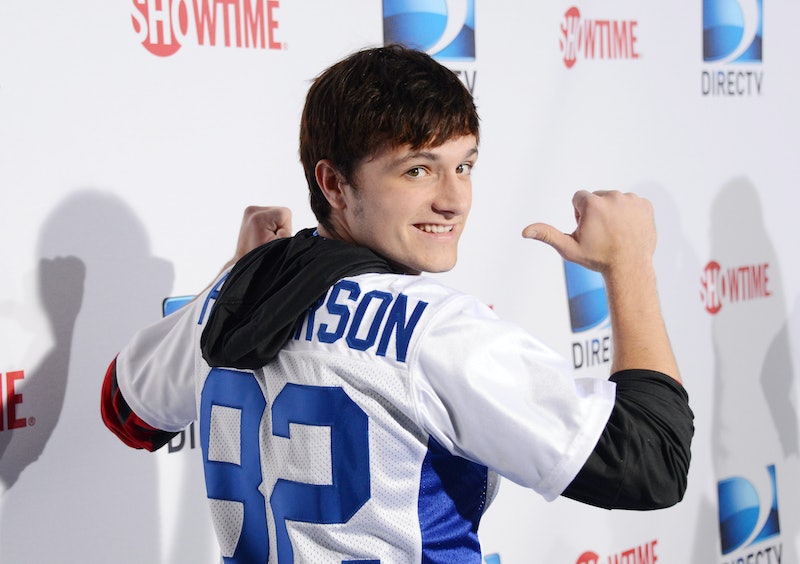 In the weeks leading up to Catching Fire's release this November, all of the attention will be focused on one person: Jennifer Lawrence. And we get it. We love wise-cracking, gorgeous Jen just as much as everyone else. But with such a media-friendly star in the lead, it's easy to forget that Lawrence isn't the only actor in The Hunger Games trilogy. Her co-stars deserve some attention, too, and we're not just talking about Miley Cyrus' ex-fiancé. It's time to give some overdue credit to Josh Hutcherson, who's made one of the best transitions from child star to A-list actor in Hollywood history.

Yes, Hutcherson is only 21. Yes, his resume isn't that long. And yes, he's not technically a "star" yet, since he's mostly played supporting roles. But he has made a remarkably smooth career transformation over the last 11 years, one that's allowed him to change right in front of our eyes from adorable kid star of family-friendly movies to respected adult lead of a hugely lucrative franchise, all while maintaining a reputation for being one of the kindest, most humble actors around. Seriously: The guy is a major supporter of Straight but not Narrow, an LGBT-ally organization, receives awards from GLAAD, and rescues puppies in his spare time. With a track record like this, Hutcherson's on his way to becoming a successful, sane adult actor who could easily sustain a long-lasting career. In other words, he's closer to being Jodie Foster than Lindsay Lohan.

How'd he do it, you ask? Let's take a look back at Hutcherson's 10 most career-defining roles:

Throughout 2002, Hutcherson made a handful of appearances in TV movies and shows like ER, but his first feature film role didn't come until 2003's American Splendor. The Oscar-nominated indie starred Paul Giamatti as real-life comic book author Harvey Pekar, and Hutcherson in a minor role as Robin. He only had a few minutes of screen time, but acting alongside A-list actors in a critically adored film isn't a bad place to start a career.

Hutcherson played Robert Duvall's son in this poorly reviewed comedy, which starred Will Ferrell as a dysfunctional soccer coach. The movie did terribly with critics and bombed at the box office, but it helped introduce Hutcherson to mainstream audiences.

Little Manhattan, a sweet, touching dramedy about the romance between two sixth-graders, earned strong reviews upon release, thanks in large part to Hutcherson's affecting portrayal of Gabe, an 11-year-old hopelessly in love. Cynthia Nixon and Bradley Whitford are great as Gabe's separated parents, but it's Hutcherson, who steals every scene he's in, who makes Little Manhattan worth the re-watch.

The year 2005 was a busy time for Hutcherson, who starred in four movies over the course of the year, including Jon Favreau's sci-fi flick Zathura. Alongside Kristen Stewart and Jonah Bobo (Robbie Weaver in Crazy, Stupid, Love), the actor brought to life Jumanji author Chris Van Allsburg's 2002 fantasy novel. The film did mediocre at the box office, but it garnered decent reviews, and made an already-familiar Hutcherson a recognizable face for family audiences.

Fans of Katherine Paterson's 1977 critically beloved novel on which the movie was based on knew what kind of tear-inducing drama to expect going in to the theater, but for new audiences, Bridge to Terabithia will forever be known as (spoiler alert!) That Movie Where They Killed the Kid. The well-reviewed film starred Hutcherson as Jesse, a fifth-grader who befriends Leslie (AnnaSophia Robb), the new girl living next door. Over the course of the year, the kids develop an immensely strong, adventure-filled friendship. And then Leslie drowns in a lake while Jesse is hanging out with his teacher (Zooey Deschanel). The story would be sad no matter what, but Hutcherson, who won a Young Artist Award for the role, makes Jesse's guilt and grief feel heartbreakingly real.

It's easy to write off this Brendan Fraser-starring sci-fi adventure flick, but you can't ignore the numbers; Journey brought in over $241 million worldwide, and is still doing well in DVD sales every year. Despite middling reviews and a forgettable plot, the movie found footing with audiences, and Hutcherson, who starred as Fraser's nephew, got his first taste of major success.

With The Kids are All Right, Hutcherson made a startling leap from child star to adult actor. As Laser, the son of Annette Bening's Nic and Julianne Moore's Jules, the then-18-year-old wowed critics with his lived-in, fully realized performance. The mature, complex role was a huge step for Hutcherson, and it showed critics and viewers that the 11-year-old star of family-friendly films was quickly turning into a grown-up actor. The movie went on to earn four Oscar nominations and tremendous critical acclaim, and Hutcherson's career transition took off with full force.

And then came The Hunger Games. Cast in the vital role of Peeta, the fellow District 9 tribute and ally of Katniss (Jennifer Lawrence), Hutcherson became a bona-fide star. The movie's enormous critical and commercial success propelled the actor into fame, and also gave him a new title: heartthrob. The 5'5" Hutcherson may not look like your typical leading man, but starring in a tween-loved franchise is a sure way to get the ladies' attention.

In November, Hutcherson will reprise the role as Peeta in the trilogy's highly anticipated second installment. Assuming the movie is as smart, fast-paced, and well-acted as the first, Hutcherson and his co-stars are sure to reach even higher levels of fame.

Last December, it was announced that Hutchinson will take on his first major adult leading role in Paradise Lost, an upcoming drama written and directed by Andrea di Stefano (Life of Pi). With a fascinating premise about a surfer (Hutchinson) who meets his girlfriend's drug kingpin uncle (Benicio del Toro), Paradise Lost, if successful, will mark a major step in Hutchinson's career. Here's hoping it is, because we'd love to see the actor take on more roles worthy of his immense talent.