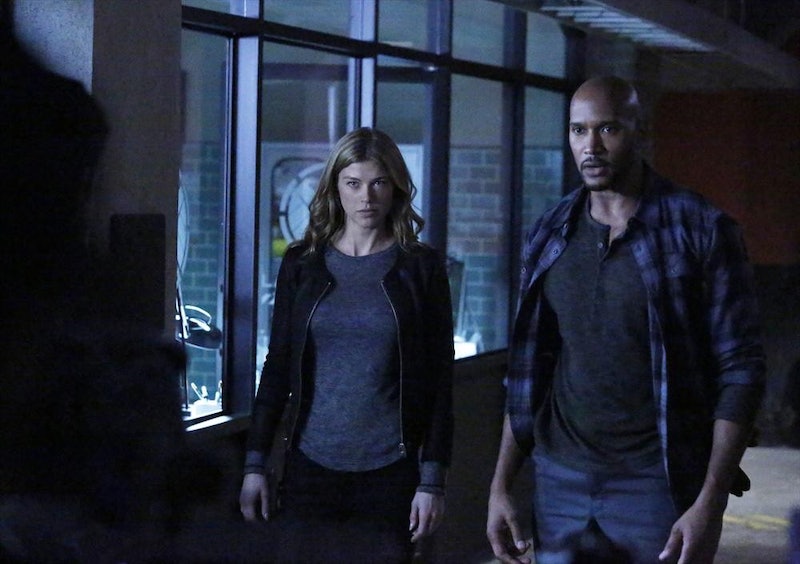 Whoa! We already knew that Bobbi and Mack on Agents of S.H.I.E.L.D. were up to something, but at the end of Monday night's episode, Mack full-on choked Lance Hunter when he came around asking too many questions. I guess we shouldn't be too surprised. Bobbi Morse was interested in bringing Lance into their mission earlier in the episode, but Mack was not having it. I hope Lance Hunter isn't dead. I can't deal with the two least sulky S.H.I.E.L.D. Agents leaving me so close together. Everyone is so moody on that plane! Surely, Mack knocked him out to take him to a secure location for like... questioning or a super secret initiation ritual or something. Right?

I would never have guessed that Mack and Bobbi were in cahoots last year, but now they are just full of secrets. What's this business with the thumb drive? Why did Mack give Coulson a Trojan "Lola" Toy Car that scanned his office when he wasn't around? Who is "backup"? At first, Bobbi seemed somewhat ashamed of their mission, but now she's into it? This is all very suspicious. We know they're not Hydra, but what are they? I would say that they can be trusted because they protected Skye against the Kree "invader" — however, you know who else used to protect Skye? Grant Douglas Ward, former Agent of Hydra.

My theory is that Mack and Bobbi are CIA Agents. We've already had interference this season from the United States Government, and this would push that further. Plus, in the comics both Bobbi "Mockingjay" Morse and Al "Mack" MacKenzie worked with Central Intelligence Agency at some point in their career. Are they after one of the diviners, which we recently learned have been scattered across the globe, just begging for a treasure hunt? Are they keeping tabs on S.H.I.E.L.D. for the Government? At least we know they're not Hydra — I can't handle another betrayal as big as Ward's just yet.