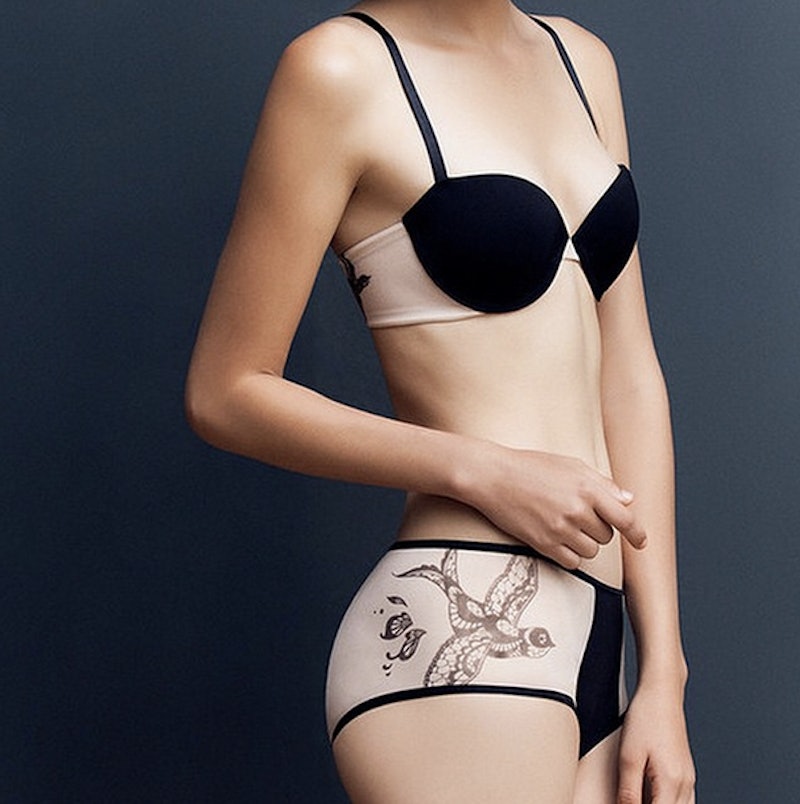 Here's a company that's bound to catch the sharks' attention. Naja will be featured on Friday night's episode of Shark Tank , and the premium lingerie line has a lot more going for it than just bras and panties. Will the sharks bite?

Well, this is a tricky one to predict. On the one hand, Naja (pronounced "na-ya") seems to be doing quite well. Its website looks sleek and professional. Its social media game is strong. It has been featured in several big publications, including USA Today, The Huffington Post, and Inc.

But getting an investment from one of the sharks is not a done deal for Naja. For one thing, it is a company with a philanthropic spirit (more on that later), which can sometimes work against companies on Shark Tank because they don't seem focused enough on making money. Naja also makes products for women, which the male sharks don't always express enthusiasm over.

What it really comes down to is the past, present, and future earnings of the company, so if Naja has the bucks to fill out this deal, it stands a chance of snagging a shark. It also wouldn't hurt if the sharks knew about these five facts about Naja too.

1. This Lingerie Is Cheeky In Every Sense Of The Word

You probably wouldn't want to wear any sheer clothing over Naja's bras and panties because most of the lingerie from this company is bright, bold, and with crazy patterns. While you probably wouldn't go wrong with any of the styles, the collection that stands out the most is definitely the Cheeky Knickers. This quirky line of briefs comes with a little wink as pictures of a cat, cheeseburger, and bush of thread are playfully located on the crotch area. I can't wait to hear what the sharks have to say about this.

2. These Panties Have A Purpose

Remember when I said that this lingerie company is about more than just fancy underwear? Well, Naja is a socially conscious company that not only uses recycled materials in its designs, but it also trains and employs single or breadwinner mothers in Colombia to sew its products. A percentage of every purchase goes toward this Underwear for Hope program, which is also supported by every bra purchase because the women in the program sew the lingerie wash bags that bras come with. Who knew panties could be so powerful?

3. You Can Buy This Lingerie Now

Naja lingerie is currently available through the company's official online store. Panties range from $15 to $32, while bras cost $50 to $95. However, if you wear plus sizes, there's unfortunately not a lot Naja can offer you right now, which is a big drawback in my eyes. The bra sizes range from 32B to 36DD, and the panties run from extra small to extra large. Hopefully, one of the sharks does invest in Naja and this problem is fixed because women of all sizes want cute lingerie.

4. Kickstarter Gave It A Push

Like many Shark Tank products, and many products created today, Naja got some help from Kickstarter. Though the company launched in May 2013, it sought some help from the crowdfunding platform in 2014, raising more than $25,000 and surpassing its goal in the process. If Shark Tank doesn't work out for Naja, it sure sounds like it could give Kickstarter another go.

5. Naja's Founder Will Be Your New Hero

Naja's founder Catalina Girald is super cool. Not only will you want to be her new best friend, but she will also inspire you to go out and start your own kick-ass business.

The Colombian-born entrepreneur first started her career off as a lawyer at Skadden, LLP, but feeling unfulfilled with her job, she left that all behind to pursue a career in the fashion industry, according to Fast Company. She took classes at New York's Fashion Institute of Technology before making the big leap to get her MBA at Stanford University. After graduating, she founded the start-up Moxsie, an online fashion marketplace, but once it was sold, she took some time off to go on an 18-month journey around the world. It was only when Girald got back stateside that she decided to give a career in the fashion industry another try by founding Naja. I'd say it's working out for her pretty well so far.