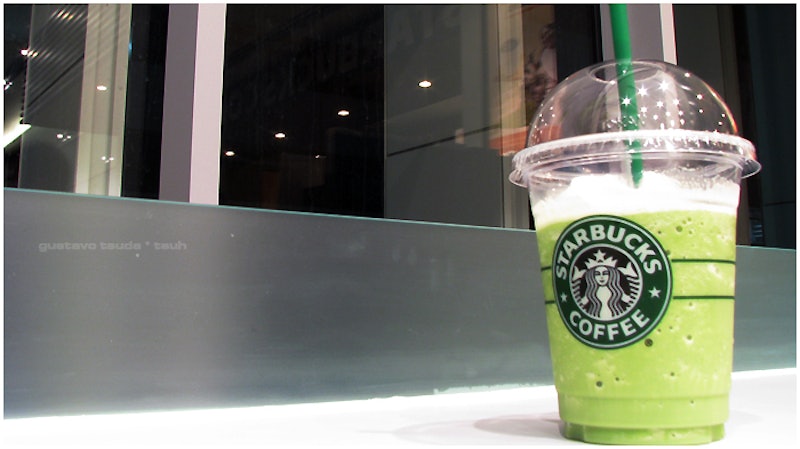 Good news, folks who live in the Pacific Northwest: The Starbucks app's order ahead feature is expanding to more locations in Washington, Idaho, Oregon, and Alaska. As of March 17, it will be possible to order your drink and pay for it in advance at a whopping 650 Starbucks stores — which, I imagine, will streamline your morning routine immensely. The coffee chain announced the news on Tuesday this week, likely making a whoooooole lot of people extremely happy in the process. Hoorah!

The “Mobile Order and Pay” system first launched in December of 2014 in Portland, OR only; available at 150 locations in the city, it seems to have done quite well, indeed. While it's true that 650 stores is still small potatoes in comparison with the number of Starbucks locations there are nationwide; according to Statista, there were 7,303 company stores and 4,659 licensed stores in 2014, making for a total of 11,962 Starbuckses in America. At the moment, the order ahead feature only appears in the iPhone version of the app; however, USA Today reports that it will be available for Android users once the system goes national. We don't know exactly when that will be yet, but we do know it will be sometime this year. We have absolutely no information about which market will be the next one to get the service, but I suspect it will expand down the West Coast and possibly kick up in major metro areas on the East Coast (New York, Boston, and so on) before it hits the country as a whole. It will probably look something like this:

Or maybe not. The Bling Ring we are not. Whatever.

Anyway, as TechCrunch notes, the 'Bux tried once before to roll out a mobile ordering system through Square; however, the collaboration was quickly shelved due to the “messy and confusing” nature of it. Wrote Fast Company at the time, “Though the payment option worked seamlessly at a handful of locations, on the whole, we found the experience to be awkward, buggy, and inconsistent. Worse yet, we found that the Starbucks baristas (and even some store managers) had little training for how to use the service, and were almost as confused about how the system worked as the customers themselves.” Square Wallet as a whole proved to be unsuccessful as well, with the company having jettisoned it in favor of other ventures since.

Starbucks' own app, though? Apparently it's pretty awesome. Nate Swanner at SlashGear tested it out when it first launched, and according to him, it does exactly what it's supposed to do. He admitted that it takes a little bit of effort to set up initially — “You have to have the Starbucks app, with a profile, and funds on your Starbucks card,” he wrote — but “the experience was as seamless as you might imagine.” It was actually as simple as ordering his coffee, driving to Starbucks, and picking it up. “They even knew it was for me, and addressed me by name,” he wrote. “All I said was that I ordered via the app, and they had it ready and waiting. I went through the drive-through, but the employee who handed me my coffee told me had I walked in, it would have been sitting on the pick-up counter for me.” How's that for service?

If you, too, live in the Pacific Northwest and own an iPhone, you can nab the Starbucks app for free in the iTunes Store. Happy coffee-ing!