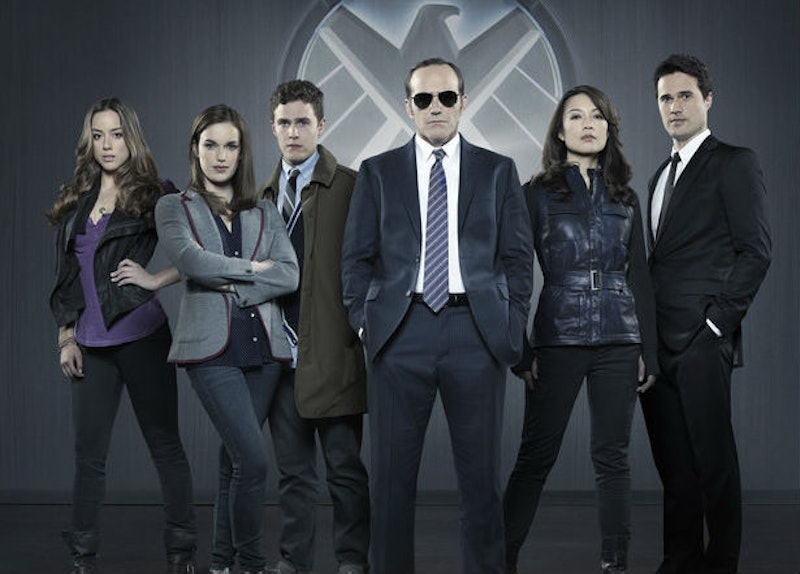 And that’s because as thrilling as the Marvel Universe on film and television is, it’s hard not to notice how predominately male the top characters are. Yes, The Avengers had Black Widow (Scarlett Johansson) and their S.H.I.E.L.D. agent Maria Hill (Cobie Smulders); Iron Man 3 saw Pepper Potts (Gwyneth Paltrow) step up her game; and Thor’s Jane Foster (Natalie Portman) is a kickass scientist – not a superhero, but she's upgraded from “Nurse Jane” in the comics. But while these women deserve all the praise we can stand to give them, they’re still second, third, and fourth fiddle to Iron Man, Captain America, and even The Hulk. It’s not like we’re going to see a Pepper Potts movie any time soon, and the Black Widow movie is only a “maybe.”

S.H.I.E.L.D. is our foray into Marvel movies and TV that treat women as equal parts of the fight against aliens and super villains. Still, it’s not that The Avengers didn’t try. Black Widow is a great character; she’s fun to watch and she seems to have no qualms about being a woman among he-men. She lets the boys squabble while she’s focused on the mission, she’s determined and deliberate in her actions, and she’s got her own set of kickass skills. (The movie doesn’t explain how, but according to the comics she’s injected with the enemy’s super serum which also renders her infertile.)

Johansson’s heroine was firmly presented as “the lady Avenger,” or the woman version of the rest of these muscular men. One look at the official movie poster for The Avengers shows Johansson strutting through rubble with wind blowing in her hair while her compatriots strike various heroic and ferocious poses. Even Nick Fury, who’s behind her in the poster, is larger than Johansson. She’s a tiny woman among big men.

However, on S.H.I.E.L.D., Melinda May acts as the Captain America to Agent Colson’s (Clark Gregg) Iron Man. They share the authority and the experience in equal measures, acting like a super-parenting duo to their younger agents, who provide fertile grounds for gender equality as well. Skye is a computer genius and former hacker whose skills become invaluable to the team as soon as she joins. Simmons’ brain knows few bounds when it comes to the world of science, and she’s even braver than her lab partner Fitz in Tuesday’s episode when the case at hand requires a little stomach-turning eye surgery.

And if these women aren’t enough for lady Marvel fans hankering for the entertainment titan to level the gender playing field, S.H.I.E.L.D. is about to introduce yet another woman we can get behind. The episode was screened at New York Comic Con over the weekend and while a man in a suit and tie made me swear not to share the secrets I’ve learned, I will say that head of Marvel Television Jeph Loeb did say that the new character might just become a fan favorite in the coming weeks.

Like her S.H.I.E.L.D. cohorts before her, this new mystery character is highly skilled and strong-willed with a developing back story. Groan all you want at the notion that she's strong, but this is a show about an organization of comic book-inspired super spies, people. If the phrase “strong female character” doesn’t make it into the writers’ room, they’re doing it wrong.

The bottom line is that if you look at Marvel’s long list of comics writers, there are only a smattering of women and the company’s roster of mainstream, blockbuster movie heroes shows a similar disparity. For those women, myself included, who’ve decided to love Marvel and all of its offerings despite the lack of gender diversity, S.H.I.E.L.D. is a godsend. Finally, we get a Marvel screen property that feels inclusive in a way that’s not forced by some marketing executive suggesting women are people too and that maybe we should chuck a kickass lady into the fray. These are true female characters, with stories that are only growing more robust as the series continues to blossom.

This is not Agent Colson’s Agents of S.H.I.E.L.D., with his harem of pretty cool ladies. It’s a network of characters who all contribute equally in Marvel ensemble that’s not dominated by men. This is significant progress and it’s a big reason S.H.I.E.L.D. deserves to become a part of your weekly TV lineup.